KNIGHT RIDER and Me! 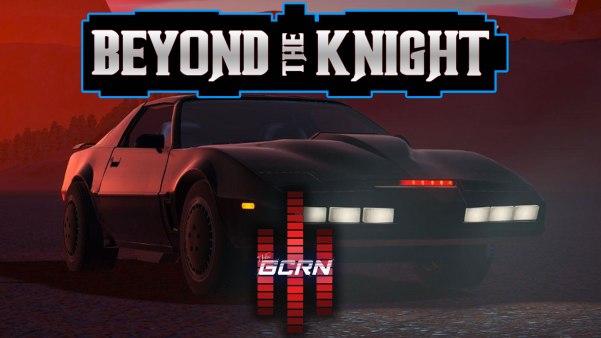 I was born in 1980, when I was 2 years old in 1982 a TV series would hit NBC that would affect me for the rest of my life. That series was KNIGHT RIDER. The adventures and missions of Michael Knight and K.I.T.T. gave my young mind action, adventure, mystery, and of course all those gadgets! Say what you will about the action TV shows of the 80s I loved almost all of them. Knight Rider, A-Team, and Airwolf are my top 3!! I know a lot of people look back now and see a bunch of cheesy, corny, and over the top kinds of things in these “Classic” TV shows. However to me they shaped my childhood, and I don’t think I’d be who I am today if I hadn’t watched them. KNIGHT RIDER was always extra special to me as a kid, because I felt like I knew the characters!  Just like you can be pulled into a good book, as a kid getting pulled into the world of the KNIGHT RIDER every week was pure joy for me. Hearing the opening narration by Richard Basehart always made me feel as if I was in the passenger seat next to Michael Knight.

“Knight Rider, a shadowy flight into the dangerous world of a man who does not exist. Michael Knight, a young loner on a crusade to champion the cause of the innocent, the helpless, the powerless, in a world of criminals who operate above the law.”

I love this franchise so much that from 2011 through 2014 I ran with my friend Duyahn the Beyond the Knight podcast on The GeekCast Radio Network. We reviewed every episode of the classic KNIGHT RIDER series, the 1991 reunion film KNIGHT RIDER 2000, yes even TEAM KINIGHT RIDER, and the 2008 continuation KNIGHT RIDER series. You can listen to BEYOND THE KNIGHT HERE!

In 1986 when KNIGHT RIDER ended, there was the Boston Budweiser Expo in Boston Massachusetts! My Mom took me to this event, and I got to meet DAVID HASSELHOFF!!! I even got to sit in K.I.T.T.!!! I have pictures of myself in the car, and with THE HOFF! This is one of my most cherished memories. I’m writing all of this to say that I can and can’t believe Funko made a POP RIDES KNIGHT RIDER figure! I HAD to have it!

I’ve been collecting Funko Pop Vinyl figures just over a year now, and I normally get the characters that I love. I do not buy every POP I see, however there are a lot that I want. When I saw and heard about the Pop Rides Knight Rider release…I literally jumped outta my skin. Funko has plenty of Pop Rides that I thought were cool, but none at the point when I started collecting them that I absolutely felt I NEEDED to have. Until…

The moment I saw that another dream was coming true. YES there have been PLENTY of KNIGHT RIDER toys, action figures, and other merch over the years, however only two were extra special in my mind. Kenner’s 1982 “TALKING CAR” with William Daniels providing his voice for several of K.I.T.T.’s sayings, and now Funko’s Pop Rides KNIGHT RIDER Michael Knight with K.I.T.T.!! I have taken the pop out of the box to get some pictures of it, and with this being my first Pop Rides figure from Funko, I have to say I’m only disappointed in one aspect of it. The wheels are stationery. I guess it makes since with it being just a vinyl figure, but I was kinda thinking they’d rotate. I know Funko markets most of these things to us collectors, but I’ve seen several parents get them for their kids. The one mark against it, doesn’t take away the enjoyment for me though. Plus look at that license plate!

I can always go back and watch my favorite episodes of the original series, and the 2008 reboot, but I haven’t had a KNIGHT RIDER action figure type thing in YEARS! This may not be a huge deal to everyone else, but the 6 year old inside me is very happy. The original closing narration from Richard Basehart always left me with chills and hope after each KNIGHT RIDER episode ended.

“Michael Knight, a lone crusader in a dangerous world. The world… of the Knight Rider.”

How to Create Screen-Realistic Stormtrooper Armor

Are Robots Really Our Future?