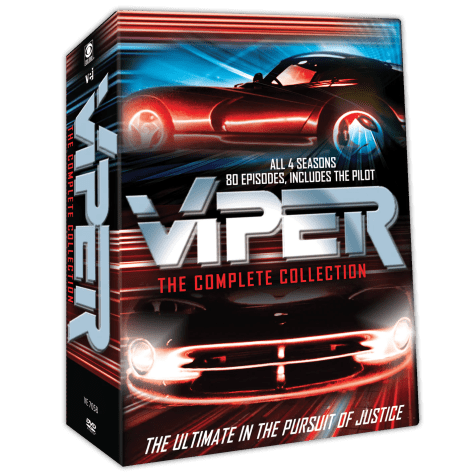 Hello all and welcome to a NEW Daily Blog series from me… TFG1Mike! I’m writing this every morning of everyday in 2019. From January 1, 2019 to December 31, 2019. In my second entry, I’ll be talking about the 1994 TV series Viper. This 90s action TV series debuted on NBC, was cancelled after 12 episodes, and then moved into first run syndication. January 2, 2019 marks the shows 25th Anniversary! I remember watching the first season starring James McCaffery, Dorian Harewood, Joe Nipote, and more. I think I had watched part of the second season, but I can’t remember. What I do remember from that time was that the second season was a whole new Viper team, with only Frankie X Waters being the one character to have been on the original team.

Two years ago Visual Entertainment Incorporated aka VEI released VIPER THE COMPLETE COLLECTION on DVD! My lovely wife Karen got it for me for Christmas in 2018. I’m currently watching through the series, and I’m almost through the second season. After getting over that Joe Astor and Julian Wilkes were no longer on the show, I have come to enjoy Thomas Cole, Cameron Westlake, and Allie Farrow! Frankie Waters in the later seasons seems to have calmed down as a character. In the first season he was very loud and in your face. I like the character growth. I do know that by Season 4 of the series Astor and Wilkes come back. As I said before… I barely watched after the first season when the show was airing, so I hadn’t known that until years later.

I very much enjoy Viper for what it is, and as I re watch through the series… I have to say it’s the 90s answer to Knight Rider in the 80s. (Team Knight Rider in 1997 is no Knight Rider series!) Most people will say that Viper is just a flashy show, in order to show off the Dodge Viper, and they may be right. That’s what the book’s cover shows you. However if you sit down and watch more than one episode of the show… you’ll realize that the characters are what make the show! Yes the car and it’s transformation into “The Defender” is awesome, and I love it, however like most people will say… you boil it down it’s just a police procedural. That may be the case, but to those of us that it affected in the 90s it’s more to us than just a one stop cop show. My favorite parts of season 1 were and are Michael Payton/Joe Astor’s story line. I don’t have a specific favorite episode, other than the 2 hour pilot film. My favorite episode from the second season so far is “Echo of Murder”. It’s your standard plot with a politician having had a past event come back to haunt him, but what I like about it is that the episode’s story builds on Cole’s character. They even have a Star Wars hologram message kinda thing, which I found intriguing, because I never thought a show like this would make a Star Wars reference! It’s hard to believe it has been 25 Years since the show debuted, and I’m glad that VEI put out the DVDs!

Viper is just one in a long line of 90s action shows that was super cool. Check it out if you can!

What are some of your memories of Viper? Did you watch it back in the 90s, or are you just discovering it now? Let me know in the comments below!

Join me tomorrow morning January 3, 2019 as I’ll be writing about Adam Levine and The Voice Season 15 debacle!

“The day after tomorrow: a time when criminals rule the city. The only weapon that can stop them needs a driver. The most wanted man on wheels is about to change sides. Now, against a corrupt system… a lone fight for justice. Viper is taking back the streets.”