Hello all and welcome to a NEW Daily Blog series from me… TFG1Mike! The idea here is for me to write something, anything, once a day for 365 days. From January 1, 2019 to December 31, 2019. In my 23rd entry, I’ll be talking about the newly released Funko Pop ICONS KFC’s Colonel Sanders. This new release from Funko is hitting Hot Topics, and other stores now, as well as preorders through online retailers. I preordered mine from Poppin’ Off Toys! You can do the same, if you are so inclined, by clicking HERE!

Growing up in Massachusetts, and visiting my grandparents, on my Mom’s side all the time…There was always one of two chain restaurant choices. Pizza Hut or KFC, and the cool thing was that they were located right next to each other. Or they might have been across the street from one another, I can’t remember now. The point is that as a kid, and even know I still love KFC, and I love what the Colonel stands for.

For the first time in 5 and a half years of The Pull Bag, I did my second solo episode on the DC Comics’ Presents KFC Comics! You can listen to TPB 329 HERE! These were fun little issues that saw Sanders teaming up with Green Lantern, The Flash, and more from the DC Universe. I bring this up only because with Funko having a ton of GL and Flash pops, I can now add in Colonel Sanders to have adventures with them!

The AD ICONS, or I guess just ICONS are a super fun line. I love that Funko has done almost all the cereal mascots you can think of, they’ve done The Noid from Dominoes, and so many more. I so want all the cereal AD ICONS, but I’d have to be a millionaire for that. Adding in Colonel Sanders just seems like the logical next step. If you look at the image above, you’ll see that there are two versions of him. A Common pop version that has him holding a bucket of chicken, and a Funko Pop Up Shop exclusive with The Colonel holding his cane. Personally I like the common pop more, because it’s… I dunno… more ICONIC? Super excited to have Colonel Sanders on my shelf next to THE NOID!

What are your thoughts on the AD ICONS and ICONS lines from Funko? Let me know in the comments below!

Join me tomorrow morning January 24, 2019 as I’ll be writing about another topic that needs discussing… 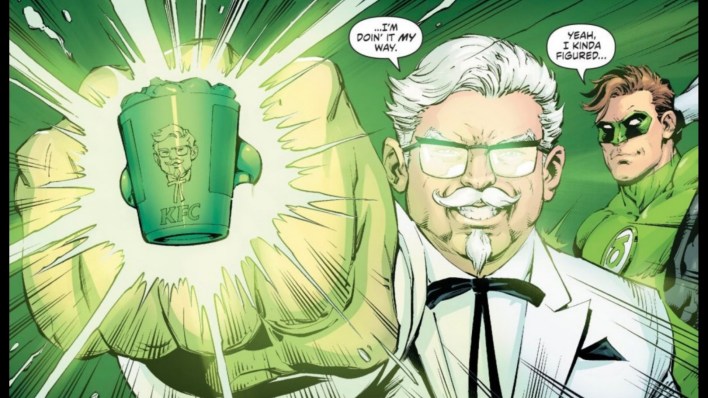