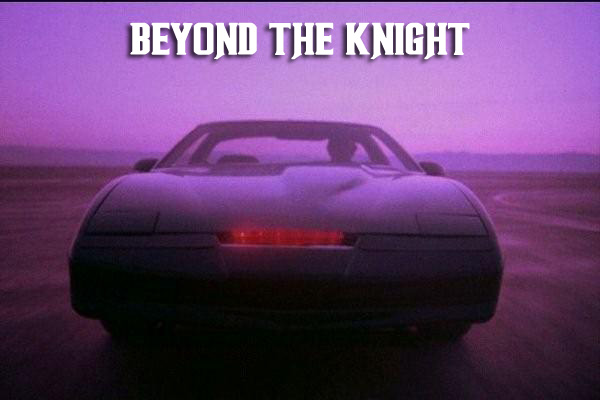 I’m 2 years older than the TV show that shaped my childhood. Back in 2009 I wrote up several blog posts about KNIGHT RIDER, you check out that first one HERE. After I wrote that up, I thought to myself hmmm… I want to go BEYOND THE KNIGHT, and create my own blog series about the show. My intention was to theorize about how to connect the original series to the 2008 sequel series seamlessly. To that end I wrote up three blog entries, the first one was just a brief overview and layout of what I wanted to do. In trying to tie the 80s and 2008 series together, I wrote up a post on Who did Michael Knight Knock Up? In the 2008 series they reveal that Mike Traceur is Michael Knght’s son, but they never expound on how Michael met Jenny, Mike’s mom. In my final entry back then… I wrote up KNIGHT RIDER THEORIES PART I! In this I pose the question of what would happen if Garthe Knight and K.A.R.R. teamed up?

Knight Rider while it’s a show that exists in the 80s, it still has ever reaching presence for me. I’m sure it also has that same feeling to all of it’s fans. Whether you like the 2008 sequel series or not…. The original was awesome back then, because it was a car with a ton of tech that only the imagination could craft. If you think about it the character of Michael Knight really did begin the whole “smart” technology thing. I mean he had a watch that K.I.T.T. could talk to him through. Look at the technology landscape we live in now. With Smart Phones, watches, tablets, and everything in between. While the idea of a car that talks might be cringe worthy to some…. think of everything we have today. GPS on our phones, in our cars, and the like. K.I.T.T. had a personality, which Michael helped shape. Each episode, whether it was hokey or not, Michael always taught K.I.T.T. something new. Knight Rider to me was more than just the effects the car could accomplish. It was about the characters, it was about the stories that they told.

As an 80s kid, the television had our imaginations going wild. Sure I read a lot of books as a kid, and I could see myself a a character in one of the books I read, but TV was a whole different thing. Instead of reading the story, I could see it on my mom’s then kinda small Zenith TV. I could respond to the lines that David Hasselhoff, and other actors that played the characters said in the show. I would watch Knight Rider reruns all the time, and even though it only lasted 4 seasons from 1982 through 1986…. The TV reruns were where I saw it all. I was watching the Knight Rider reruns well into 1989, and then I think they stopped airing them. I had to move on and find new shows to attach my fanaticism to.

Fanaticism is a funny word, and I’ll have another blog post all about that in the coming days. But first…. my fleeting moment of childhood fame. The year was 1986, the place was Boston Massachusetts, and the event was the Boston Budweiser Expo. I remember my Mom and I think her then boyfriend Tom was there as well. There were all kinds of cars at this event. I saw the Ghostbusters Ecto-1, and so many others. However SEEING K.I.T.T. and Michael Knight IN PERSON changed my life. David Hasselhoff played the character on TV, and the car was there as well. I remember six year old me not wanting to smile or even look at the camera, because  I WANTED TO DRIVE K.I.T.T. I wanted him to talk to me, just like he talked to The Hoff’s character on TV. Sadly that didn’t happen, but as you can see from the picture above I’ve got a memory forever etched in stone as Michael Knight holds my Cerebral Palsy right hand and we do the signature thumbs up from TV’s KNIGHT RIDER!! What you can’t see in the picture with The Hoff is that I’m wearing a KNIGHT RIDER t-shirt!!!

I’m five months away from my 40th birthday. If back in the 80s there was a different show on TV, besides Knight Rider, I most definitely would not be the person I am today. I don’t know how I’d have turned out without Knight Rider. This also goes for Transformers, He-Man, Thundercats, and so many more live action, and animated programs that I grew up watching. We are all exposed to various things in our lives, and not all of us have seen the same things. If we were all the same people, exposed to the same stuff, we’d all be robots. No one wants that, we as humans each bring something unique to the world.

On this day in 2012 my buddy Duyahn and I started the BEYOND THE KNIGHT podcast. We reviewed every episode of the original Knight Rider series, Team Knight Rider, and the 2008 Knight Rider continuation series. We also covered the 1990 Knight Rider 2000 made for TV film. It was a blast, and I’ve wanted to return to it, in order to cover the comics that Lion Forge released a few years ago, but there just hasn’t been the time to do this. You can check out the podcast HERE.

I don’t know the next time I’ll write another one of these daily blogs up. I’m hoping to write something for Days 360-365 to end the year. I wish I could have kept up with this thing, but life happens, and as I’ve always said whether in writing or podcasting, “Life Comes First.”

I hope you’ll join me tomorrow, or maybe in a month from now, whenever the writing bug bites me in the ass. Thanks for reading these things everyone. 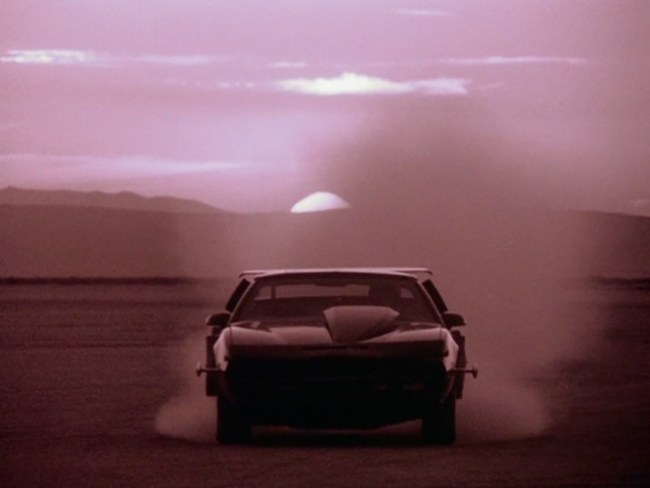