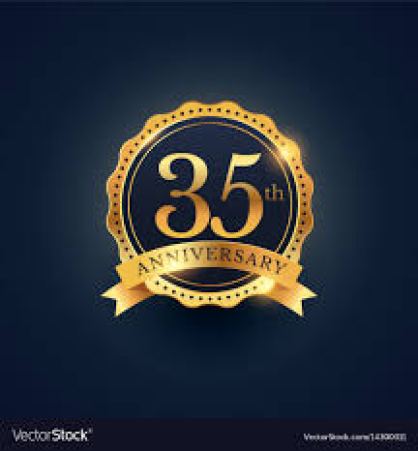 Hello all and welcome to a NEW Daily Blog series from me… TFG1Mike! The idea here is for me to write something, anything, once a day for 365 days. From January 1, 2019 to December 31, 2019. In my 35th entry, I’ll be talking about stuff that came out 35 Years Ago this year. I put it out on twitter asking for suggestions of stuff that came out 35 years ago in 1984. I will be talking about the things I put out there, and the stuff Mike from Earth-2.net suggested as well. 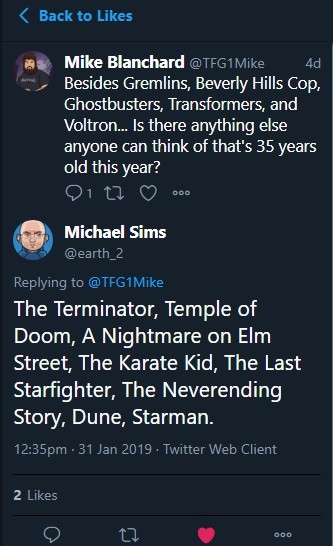 We now live in a world where Geek Culture is at it’s finest, and the geeks have inherited the world. 35 years ago being a geek or a nerd was a bad thing. Something has happened in all this time, where it’s now a good and cool thing to be geeky. I was 4 years old in 1984, so Transformers, Ghostbusters, Gremlins, Beverly Hills Cop, The Terminator, Voltron, A Nightmare on Elm Street, and The Karate Kid all hit me at a very young age, and each has left an impression on me that has shaped my life. I didn’t see The Neverending Story until after I saw it’s sequel. I know I’m going to get flack for that, but I never saw Tron until Tron Legacy came out either. We are all exposed, and introduced to different things throughout our lives, and I personally believe that if we all grew up on the same stuff, life would be boring. I believe we all bring something to the geeky table, and if you look at Geek Culture these days, it’s just like high school. There’s a table for everyone to sit at.

Temple of Doom freaked me out as a kid, I never saw Dune, The Last Star Fighter, or Starman. It’s difficult to believe that all of these things came out so long ago. Now we all hold them in this time capsule of a moment. They each are a snapshot of our lives. Transformers and Voltron were two of many cartoons that I grew up on. The funny thing is until the Voltron Lion Force DVDs hit a number of years ago now, I don’t remember watching the show as a kid past the second season. Whereas Transformers, I remember everything! Nightmare on Elm Street scared the crap out of me as a kid, and it’s just one of a long line of horror films I saw, that gave me an aversion to the genre. Once again with The Terminator, I saw T2 first, and yes I did go back and watch the first film before I was an adult.

Ghostbusters is now a worldwide franchise, that inspires millions of people. Think about this, one little movie from 25 years ago, created a fandom that is inclusive to everyone. Hell Transformers did the same thing, but Ghostbusters took it many steps further. Nostalgia rules me, and I love watching old cartoons, movies, and TV Shows. The Cosby Show also came out in 1984 on our TV screens. YES I know Cosby Himself is a monster, but I still defend the show, it’s creators, and the rest of the cast and crew. The lessons that show taught me, still stick with me today. So what was it about all these things that came out so long ago? These moments now frozen in the time that they were created.

Transformers and TMNT were two of my biggest animated influences as a kid. The crazy thing is that I never read the original Eastman and Laird comics from Mirage. I started by watching the TMNT cartoon in 1987. David Wise, and the rest of the crew did an amazing job crafting this show. The voice actors brought such unique tones to the characters, and they had been the definite voices of the TMNT. The stories that were told in the TMNT cartoon might seem cheesy nowadays, but honestly back when they were fresh, they were stories we kids of the 80s hung onto every word! The same goes for Transformers, I DARE any kid of the 80s to say they didn’t cry when Optimus Prime died in the movie. Another great reason cartoons were amazing in the 80s were the opening and closing themes.

So I want to wish a Happy Anniversary to all of these franchises, shows, films, cartoons, and more. 1984 was also the year New Kids on the Block debuted, as well as TMNT!

What are some geek and pop culture things that are 35 years old that you still love today, and what affect did they have on your life? Let me know in the comments below!

“Freedom is the right of all sentient beings.” – Optimus Prime

“COWABUNGA!” – Michelangelo and the TMNT!