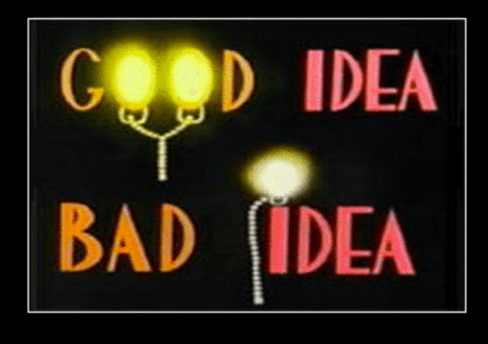 Yes I got the theme for the post from the Animniacs skits, no this will not be about me giving you the reader any wisdom filled advice. No this will be me talking about whether or not to put an idea out there whether in real or online life. A creative thought of something that I’d like to see happen, sadly I doubt I could make it happen. Basically I have three character ideas for two certain Transformers characters. My hesitation of even telling you who the characters are, and what the ideas are, is that someone might just steal that idea. They’ll take it, run with it, and make a billion bucks. Well they probably won’t make that much money, if any….Still it’s a nagging insecurity I have. That’s where the GOOD IDEA, BAD IDEA aspect of this comes in. Sharing opinions, thoughts, creative ideas, and anything else you can come up with seems to be the good idea bad idea double edged sword. I try my best to find like minded people as I am, but I’m sure we all disagree on various topics. After all if everyone agreed with everyone, this world would be a boring robopocalypse.

All three of my ideas aren’t original at all, when it comes to the general concept of them. They originated in other media. I just think that they’d be cool to explore these ideas with these characters. The first is taking the character Punch/Counterpunch and putting him in some sort of Cybertron version of NBC’s My Own Worst Enemy. Oh you never saw that series? Well take a look at the promo trailer from 10 years ago.

The other two ideas involve Megatron and Galvatron. I blame writer James Roberts of Transformers More Than Meets The Eye-Lost Light for one of these…That idea would be an Old Man Megatron story, but he would be in his holoavatar form. The third idea is based on Casey W. Coller’s art print for TFCon LA 2019. Of course this idea was from Spider-Man No More. You can see Casey’s Print HERE! My idea would be almost as if Galvatron and Megatron would be a Firestorm-Force Ghost kinda story. More Force Ghost than Firestorm though. Because Megatron “died”, and was brought back to life as Galvatron! (YES I’m going by the G1 Continuity, where they were the SAME GUY!) Basically you’d have Frank Welker talking to himself as both characters as Galvatron would attempt to take over Cybertron in a stealthy and cunning way, with Megatron kinda guiding him.

Well there ya have it folks… I blabbed my ideas out there into the internet. Not the best story ideas, and I doubt it’d ever get stolen, but please… Don’t tell me, but if you want to let’s talk about your good and bad ideas in the comment below!

Join me tomorrow morning February 23, 2019 as I’ll be talking about something! I talk-write a lot ya know!