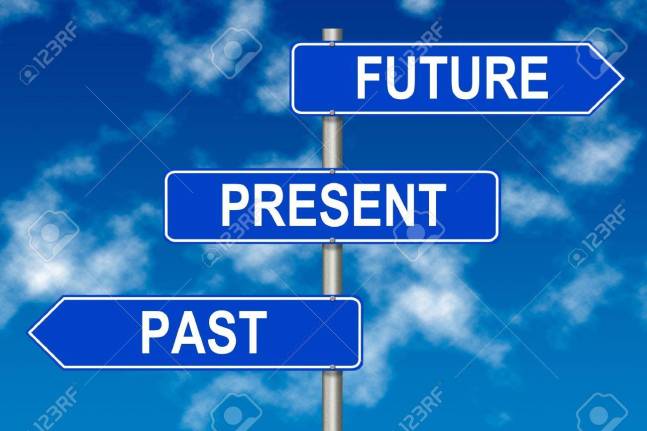 Stuck in the Past, Living for Today!

Hello all and welcome to a NEW Daily Blog series from me… TFG1Mike! The idea here is for me to write something, anything, once a day for 365 days. From January 1, 2019 to December 31, 2019. In my 60th entry, I’ll be talking about what’s it’s like being stuck in the past, or living in the moment. Can you believe it, we are 60 days into the new year. 2019 might just be beginning, but it seems like it’s been longer than these last 60 days. 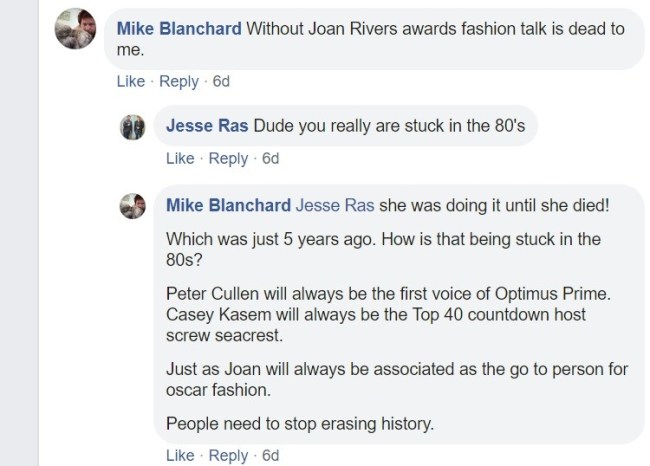 ^This back and forth with my buddy Jesse is where the thought of writing this came from.

It was Oscar night February 24, 2019, and I didn’t even watch the awards show. I’m super stoked Spider-Man Into the Spider-Verse won for BEST Animated Film though. You can go back to DAY 41 for my thoughts on awards shows, this blog entry will be completely different than that one. However it is award show adjacent. So as you can see from the above image… I truly feel no one other than Joan Rivers can do the Academy Awards or any Red Carpet justice. The woman just had a knack and feel for it, and I personally can’t listen or watch anyone else talking awards season fashion… Not that I watch at all anymore. On DAY 48 I talked a bit about nostalgia. Yes I know always move forward, but sometimes going backwards is the only way forward. Yes I know that others in the Hollywood news reporting business will take over Joan Rivers’s job of talking fashion at awards shows, however in my mind no one did or will ever do it better than her. It’s the same thing with the American Top 40 Countdown…. while Ryan Seacrest does the job a good service, he will never ever be a Casey Kasem.

My way of thinking is that the past we learn from, we live in the present, and plan for the future. We never know what the future holds, and you just kinda have to roll with the punches! However between past and present we can learn a whole bunch from what we did before, compared to what we can do to not repeat any mistakes that might have been made. I’m a kid of the 80s and 90s… that’s who I am, and because of that I tend to stay stuck in those eras at times. Honestly while they had issues the 80s and 90s I personally feel were better than the world we live in today. Yes today we have high tech gadgets, smart homes, smart phones, and “smart” everything… Yet it seems that all common sense has gone out the window. Yes there has been violence since the beginning of time, and every era has had it’s fair share of tragedies, yet nowadays whenever I turn on the news… it’s this person, or those people were murdered. It’s depressing as hell. Yes I know the old news standard if it bleeds it leads, but very rarely do I see a heartfelt news story on a television broadcast. Even the weather reports can be depressing depending on where you live.

In the last two years I’ve watched and re watched more old TV shows, than I have any of the new ones. The main thing with new shows is that unless they do well, they don’t stay around. So my thought is why get invested in them if they aren’t going to have the longevity that older shows had. I mean come on 20 Years, 20 Seasons of L& Order, as well as L&O SVU. Those are some great shows. I recently went back and watched Fox’s short lived Red Band Society, and damn if I wasn’t left with the feeling of I want more after finishing it. I’m not saying that Hollywood shouldn’t try to craft new ideas, they absolutely should, but as someone online pointed out to me, remakes, reboots, all that stuff from the past… That is what makes the most money. I’m watching the stuff I grew up with, because it’s the stuff I enjoy, and I view it in the time that it was made.

Join me tomorrow morning March 2, 2019 as I’ll be writing about yet another topic that strikes my fancy!