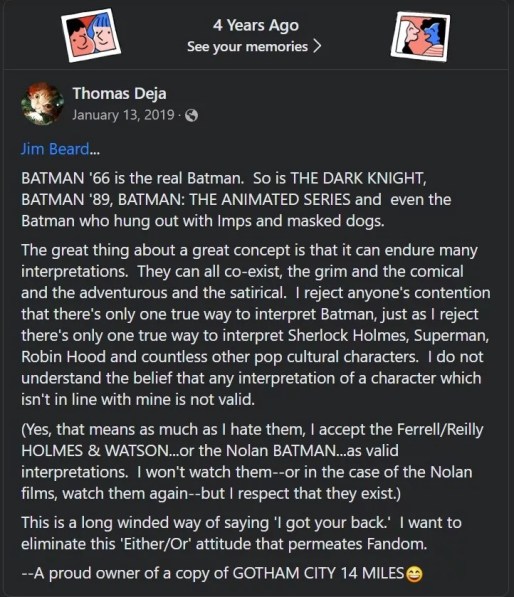 Say No More To Either Or!

Hello all and welcome back to TFG1Mike 365! It’s Day 15 of 2023!!! New Year brings new hopes and dreams to all of us I think. In case you haven’t read any of my blogs before, you can find all the blogs over at FROM THE DESK OF TFG1Mike! Normally my goal with this series is to wake up each new day, and find something on the internet, or in real life to write about. Today’s topic is “NO MORE EITHER, OR!” My good friend Tom Deja wrote the above statement 4 years ago, and he recently shared this memory on Facebook, as you can see above.

I agree with him, every interpretation is VALID, we just don’t either care for certain versions or in some cases never pay any attention to them. Oh no! I just did an either or! For me I was raised on multiple televised versions of Batman! From Adam West in the ’66 show, to the cartoon adventures that preceded BTAS, and more. I was 9 years old when Batman ’89 was in theaters, I never got to experience it in the theaters… However a year later in the holiday season of 1990 it was playing on the TV sets in Sears! My Mom was shopping, and I wanted to watch the thing. So she said as long as I sat there until she returned… I could watch the thing! I was captivated by Keaton, Nicholson on the big screen as characters I’d only seen in animation before 1989.

I’ve mentioned on podcasts recently, and on these writings, that I was a “CARTOON KID, not a “COMICS KID”! It wasn’t until AFTER Batman ’89 that I picked up a comic, and it kinda scarred me a bit. I still to this day do not remember which BATMAN comic it was, but it was ten times darker than the ’89 film, and no it was not The Dark Knight Returns! Anyways… My entire life has always been about choices, not necessarily “either or”, but choices in media and other geeky things. Just because I chose TRANSFORMERS over G.I. Joe as a kid, doesn’t mean I didn’t catch the Joes beating up Cobra in the RAH cartoon.

I used to be that person though sadly… You know the ones, those people that SCREAM: YOU CAN ONLY HAVE IT THIS WAY, BECAUSE THIS IS THE ULTIMATE DEFINITIVE VERSION!!!!!! I’ve enjoyed and disliked many versions of characters over the years, I normally stick to what I like, and trying new things has never really been my thing. The reason for that is, what if… what if I don’t like it? At this point in my life I’m not wasting time anymore. So I say as Tom said, no more either or, everything is valid! Everyone has “their” version of whatever character it is. If we all had the enjoyment of the ULTIMATE ONLY VERSION… then this world would be boring as hell. So let’s try our best to do away with the either/or mentality shall we?

Captain Ruggels Gaming - What Could Go Wrong? | WAR OF THE WALKERS