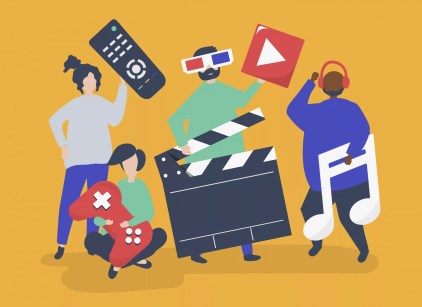 Image courtesy of FreePik Check it out HERE!

Entertainment Is Meant To Be An Escape!!

Hello all and welcome back to TFG1Mike 365! It’s Day 6 of 2023!!! New Year brings new hopes and dreams to all of us I think. In case you haven’t read any of my blogs before, you can find all the blogs over at FROM THE DESK OF TFG1Mike! Normally my goal with this series is to wake up each new day, and find something on the internet, or in real life to write about. So people have told me in the past that when I record podcasts, I do not give critical thinking or descriptors when describing a piece of entertainment. For me with entertainment it’s an ESCAPE! YES there are plenty of films, television shows, comics, music, and so on that can make you think, but for me it’s how I feel about what entertainment I’m consuming. If I feel good, or I like it, then that’s my thought on it. If it makes me feel bad, or uncomfortable, then that’s how I feel about. I “OVERTHINK” every other aspect of my life, and with my entertainment I don’t wanna be over thinking anything.

The Fictional worlds that we have had over the last let’s say 101 years or so are there for everyday people to come home, relax, and escape. Because they’ve either been at a 9 to 5 job or whatever, and they just don’t wanna think about that when they are at home. For me I was taught the difference in what I was seeing on TV or in films, was make believe, and it wasn’t reality. When I was between the ages of 5 to 14, there was no internet, we had to hand write everything out, we had to make sure we were plopped in front of the TV or radio at the exact time our favorite program was gonna come on, so we didn’t miss a thing.

Entertainment now in 2023 is at our fingertips, and it’s that instant gratification I’d always dreamed of. The fact that I can now pay for (insert streaming service here or whatever) for AD FREE content is everything I’ve always wanted. We can search for something, and find it almost immediately. We can listen to music, read comics or books, and watch whatever we want now… On our schedule!!! No more fast forwarding through recorded stuff o VHS tapes etc.

As I’ve said in other writings, I’m a Nostalgist. I’m all about revisiting something I know, more so than trying something new. The reason for that is, for the most part I can count on a show or film I’ve already seen. Whereas with let’s say TV Shows specifically… I’ll get interested in a NEW show, and then whoops it either gets cancelled after x number of episodes, or it ends on a cliffhanger, and we never get another season because of cancellation. YES I know TV is all about the ratings, and if a show doesn’t do well in the ratings it gets canned. However we as viewers feel as if the show or shows could have gone on. Below are a handful of shows I wish we ha gotten more of:

NBC’s The Playboy Club – Yeah Yeah I know, butt come on it had David Krumholtz in it! Only three of the seven episodes produced actually aired. You can watch the trailer HERE!

Drive from FOX in 2007, We did an episode of REMOTE CONTROL all about this show. You can watch a clip HERE! This was a six episode show, that left you cliffhanged, but it was a great six episodes, that I wanted more of.

I’m sure there are others that I’ve seen, but I can’t think of them at this moment. At the same time there also have been one and done seasons of TV shows that I’ve absolutely love, and felt that they didn’t need anymore. I also feel like we need more films like that. Examples I can think of, that are one full story and done films are 6 Underground (even though there could have been a sequel)… The Adam Project (sleeper hit of 2022 in my eyes) And others. For the last two decades it all been about building a universe, or a multiverse… That’s great, and I love that we’ve had that with the MCU. However I miss those films that you can just watch one thing, and get a full story.

Captain Ruggels Gaming - So much for Stealth | Penguin Heist