Dice, engine-building and simple rules come together in Dice City to create a fun, light game that is great for new as well as the seasoned gamer.

In Dice City players are attempting to gain the approval the Queen, in hopes of becoming the new capital city of Rolldovia. They must expand their growing city with a stronger military, by seeking out lucrative trade markets, and building fantastic new buildings.  Players all start with the same city game board and five different colored dice.  The dice are used to activate locations that will help players build up their city.

The player who scores the most victory points from fighting off barbarians, sending out trade ships, and building new buildings will win the game.

The components of Dice City are beautiful and durable.  The game comes with four separate player boards that represent each players starting city.  There are a lot of cards that come with the game including 45 harvest location cards (lumber mill, quarry, and mine), 15 regular army cards, 60 location cards, 18 bandit cards, and 11 trade ship cards.  There are seven types of tokens: 30 resource tokens, 16 deactivation tokens, 16 pass tokens, 1 start player token and 30 victory point tokens in 1, 2, 3, and 5 denominations.  There are also 20 dice, five for each player in white, yellow, red, blue and black.  Four reference cards are the final component. 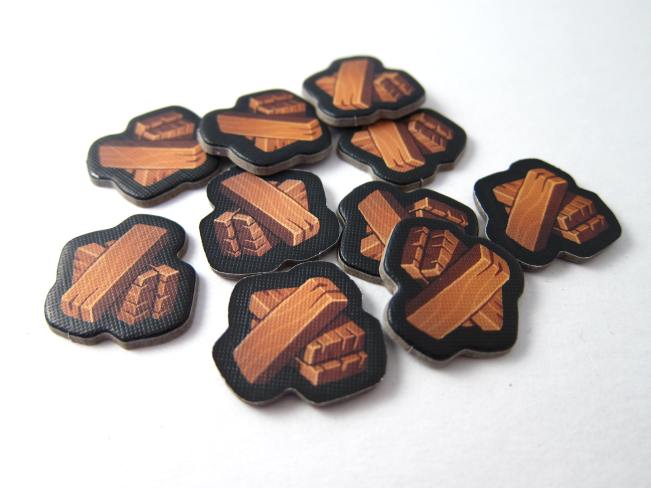 Next, players should sort the tokens by type and place them within easy reach of all the players.  After the components are set-up, all players will roll their five dice and assigns them to the correct location on their player board.  Assign Dice according to color and number.  The color corresponds to the die’s row and the number the column.  Therefore, if you roll a six on your yellow die, you would assign it the yellow row and the six column. 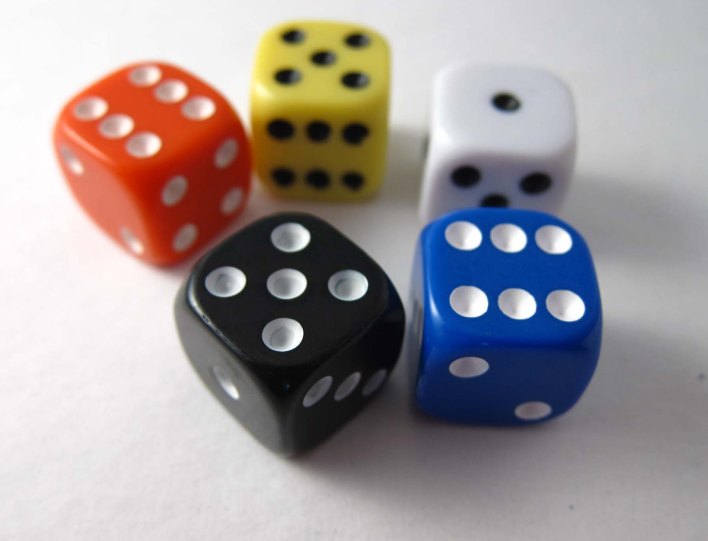 There are four steps in each players turn:

For each of their five dice, a player may take one of the following actions.   Once a die is used it should be removed from the board.

Resources gained from locations should be added to the players stock and victory point tokens gained should be placed face-down in front of the player.  After the player uses all their dice they proceed to the attack step. 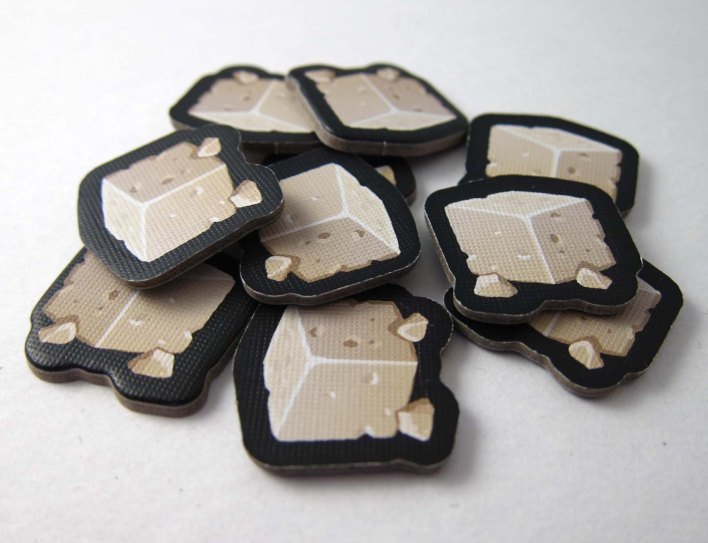 Military location are red and some may have a icon in their text ability.  If they have a sword icon they are considered army locations and add that number to the player’s army strength.  For example, the catapult adds three strength to your army strength if it is deactivated.  A players army strength only lasts for the duration of their turn.

If a player has enough army strength from their used locations they may preform bandit, location and stock attacks.  To attack bandits, the player needs equal to or greater army strength than the bandits defense.  Defeated Bandit cards are placed in front of the player face-down.  To attack locations, the player must choose one or more locations on another player’s board for which they have strength equal to the location’s defense,  they place a deactivation token on the building and gain VP equal to the location’s VP value.  Already deactivated locations and locations without defense value cannot be attacked.  A player may also attack another player’s stock.  For each two army strength they may take one of their opponent’s resources and place it into their stock.  A player may attack multiple times as long as they have enough army strength. 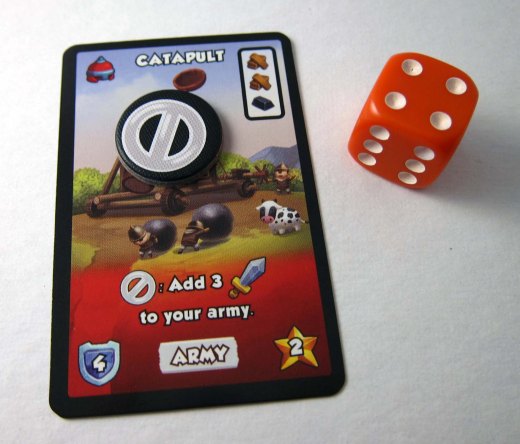 During this step, a player may build new locations by spending resources from their stock equal to the cost of the building.  For example, to build the stables the player must spend two wood.  Once they have spent the resources the player may place the building anywhere on their player board, even on-top of another card.  The player will no longer gain VP from the card that was covered, instead it is discarded.  Players may build as many locations as they wish as long as they have resources.  Immediately replace cards taken from the display.

Players may also spend resources to gain trade ships. To obtain the ships, a player must discard resources according to the trade ships cost. Trade ships are placed face down in front of the player, just as bandit cards are. 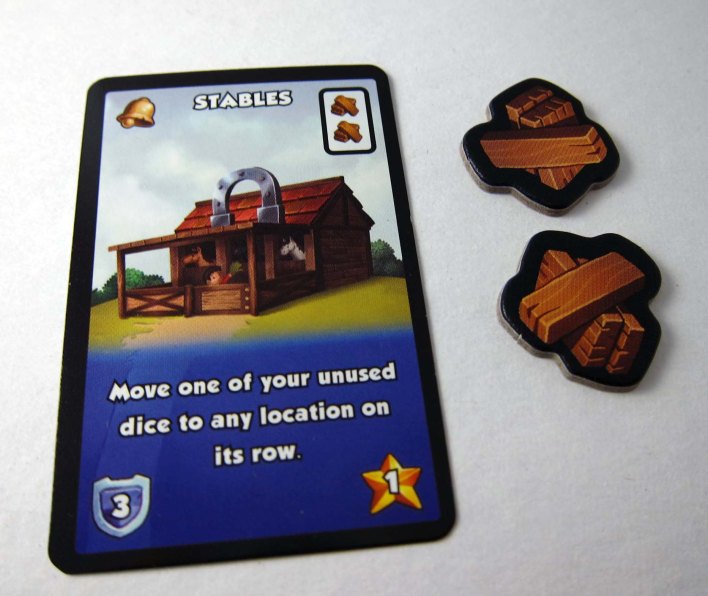 At the end of their turn, a player may store one of each resource type returning any return extras to the supply.  A player may keep all of their pass tokens. A player’s army strength also reverts to zero during this step.  Next, the player rolls  their dice and places them in the appropriate spot of their player board.

There are four ways that the game can end. 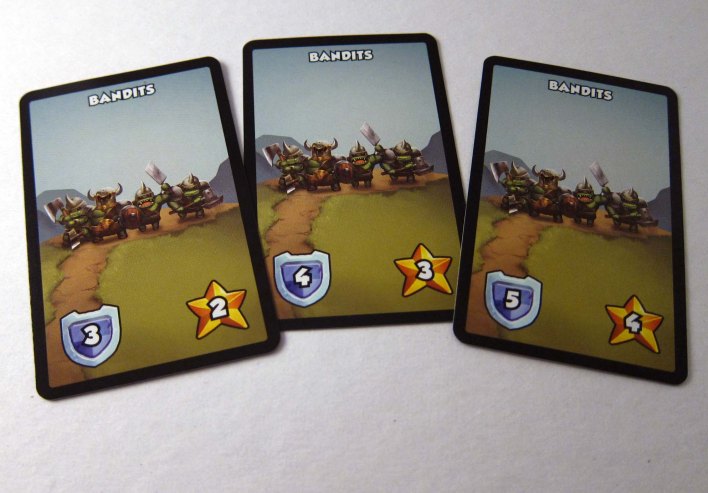 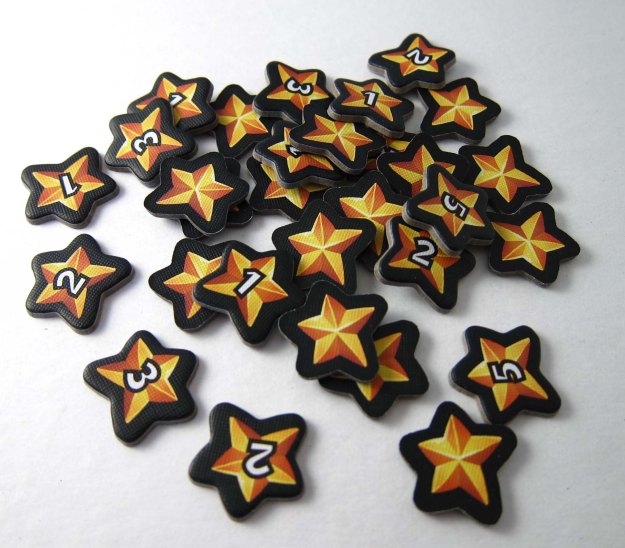 The dice, artwork, graphic design, lightness and game play is making Dice City a new favorite.  Dice rolling has always been a favorite mechanic of mine and I really like the implementation in Dice City.

I wasn’t sure about the artwork of Dice City, its cutesy, the people have big heads, and the cards are so small it is hard to see.  When you look closer you will not only how beautiful it is, but how the vibrant colors and graphic design adds to the game play.  The artwork gives the game personality and fits both the theme and depth of the game.  The color choices and iconography are easy to understand and at a quick glance you can tell types of buildings and what they can do for you.   The artwork on the upgraded locations make them stand out as more substantial than the starting buildings and they fit seamlessly on the board. By the end of game your player board looks so different with the upgraded harvest cards and buildings.

The components I was most surprised about in Dice City are the player boards.  I didn’t realize they would be actual game boards and I was expecting something less substantial. The simple addition makes me like the game so much more than I would have if they were paper.  The cards are small, but good quality and regular sized cards would have taken up too much table space. There are a lot of different buildings in the game, but I would like to see even more.  After just a few games, it seemed we were seeing the same buildings and we would choose the same ones each game.

The tokens have the same consistent artwork as the rest of the game and are thick cardboard… I love their shapes and design.  The dice are good quality, match the game board well, but are pretty plain dice, nothing special. I plan on upgrading to nicer quality dice at some point because it is one of the easiest ways to pimp out a board game.

It is also good that the game includes reference sheets for each player.  I wish both sides of the reference sheet had been used to include either the end game conditions or the location types on the back.  Those who don’t like double-sided reference sheets won’t mind, but I feel it was a missed opportunity. 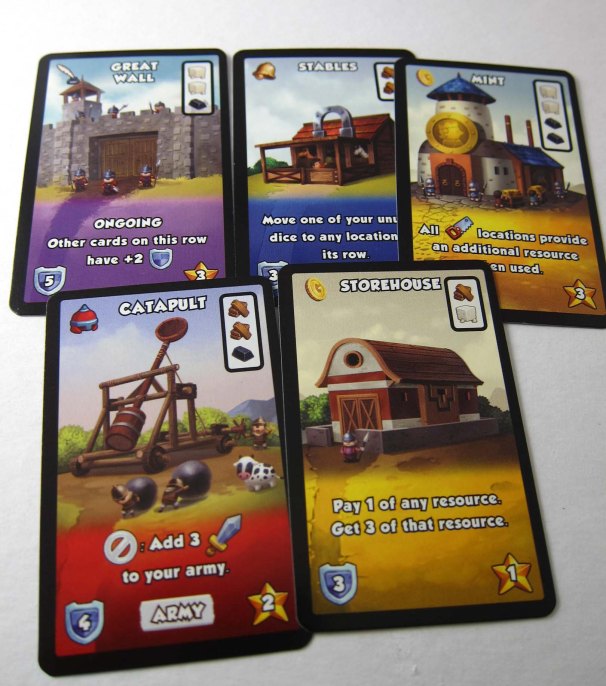 I was impressed with the rule book,  it is easy to read and understand and contains most of what I look for in a good rule book.  There are plenty of pictures and it is as bright and colorful as the game, the visual example of the set-up and how to assign dice is a great addition and very helpful to new players. There is an excellent component breakdown in the front of the rule book with pictures and a detailed card description.   The scoring example is useful as well even in a simple game such as this, many heavier games would benefit from the same from the same example in their rule booklets.  Those interested in solo play will appreciate that the game comes with a solo variant.  While we had few questions after reading the rules, there is a section of rules clarifications in the book.  This was helpful when we didn’t understand ongoing abilities since there is only one card with an ongoing ability.  There isn’t a rules breakdown on the back of the rule book, another thing I look for, but the reference cards handle some of what I would expect to find there.

I really enjoy the engine building part of Dice City.  I love adding buildings to my city and seeing the result when you have those fantastic turns gaining tons of resources or army strength.  I never think I can possibly get the 20 VP trade ship at the start of the game, but by the end it seems possible.  I enjoy how the you can choose buildings that work well together and help you reach your goal.  Luck mitigation is possible in the game, you can add buildings or move dice in its row as a die action.  l  I also found the pass tokens to be extremely useful when you are not getting the resources you want.  Not being restricted in where you place your buildings is great because it gives players flexibility and keeps the game light.  For example, if I am not concentrating on military I can cover up those areas without penalty, making my board optimal to my play style. 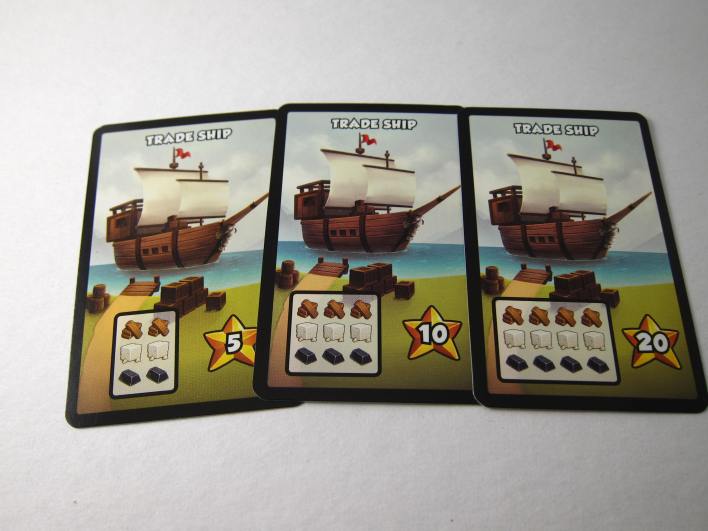 There are multiple paths to victory players can pursue; you can concentrate on building, military, or trade.  We did find that if you go the military route and don’t attack the other player it will be tough to win.

The game seems like it may become multiplayer solitaire, but there is a good amount of potential player interaction.  A player can attack your buildings and resources to gain victory points or keep you from using your better buildings.  My husband and I usually don’t play this way, but many people will like that the option exists.  Players can also control the timing of when the game ends, and they need to be aware of how the other players are doing with their score.

Turns are quick and you can use the downtime during other player’s turns to think out what you are going to do on your turn.  The game plays well with two players, but I’m unsure how it would play with four. 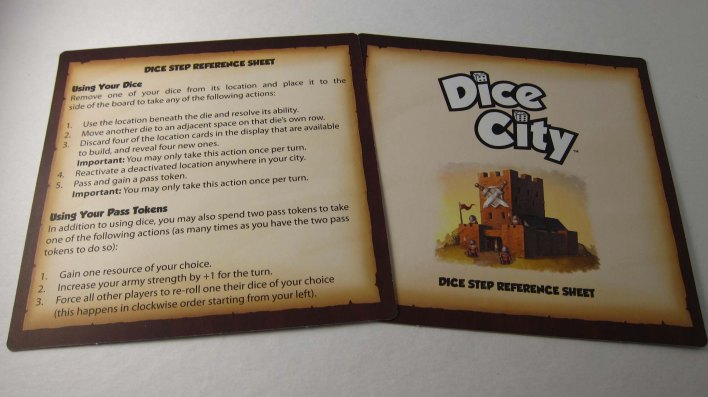 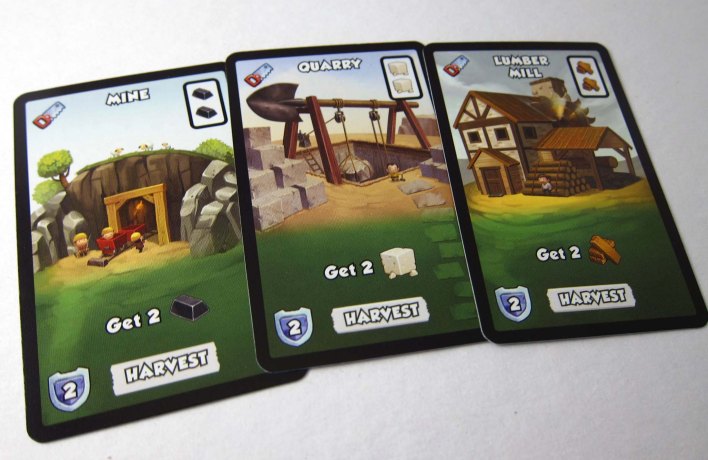 Overall Dice City is a fun, light game with lots of replay value, replay value that will likely further improve from the upcoming expansion.   Dice City makes me excited for what AEG may offer in the future in their games line, as they seem to be producing more of these family friendly games recently. 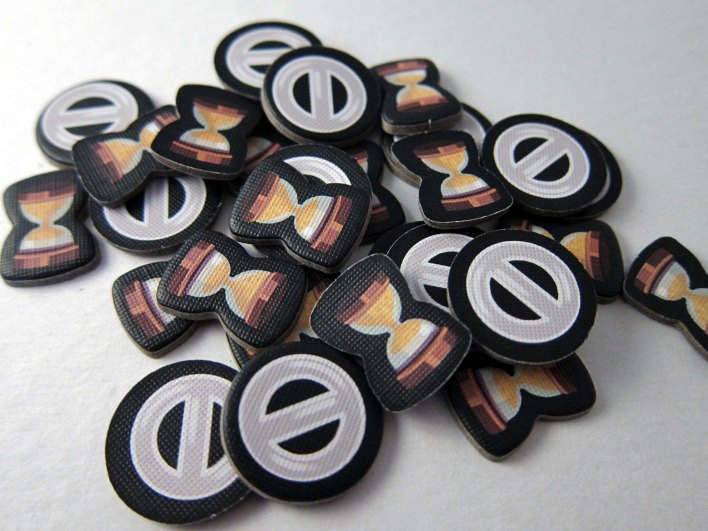