Boomtown Bandits is a dice rolling game for two to five players. The town’s locations are the sites of daring, real-time, dice battles and the last shooter left standing gets the loot.  Whoever can steal the most money is declared the best bandit, and the winner of the game.

To set up the game, first choose location tiles equal to the number of players plus one (three for two player game, six for a five player game), and line these up on the table.  There six locations: the train, the mine, the saloon, the brothel, the stagecoach, and bank.  Each location also has seven loot cards; these are shuffled and placed face down next to the corresponding location.  Take the blue backed bonus for the locations that will be used in the game and the “Own the Town” bonus card.  These should be set aside for end game scoring.

Give each player the three dice and three tokens in their chosen color.  There are two shooter tokens, one coward token, two shooter dice, and coward die for each player. 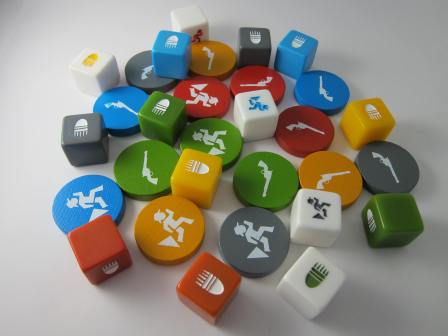 Each round of Boomtown Bandits consists of three phases:  placement, reveal, shootout.

During phase one, players take turns placing one face-down token on an available location.  A player can choose to place more than one of their tokens on the same location, but you many only place one token at a time.

Once all tokens are placed, flip them over to reveal the symbols. 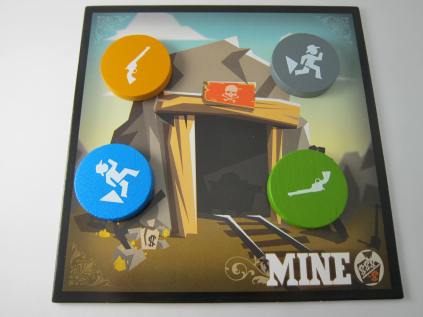 Now that the tokens are revealed resolve each location left to right.  When there is only one player at the location they win, and take a loot card.  When more than one player is at a location a shootout occurs.

To start a shootout, the players take the dice that match the tokens at the location.  A player not involved in the shootout will say, “3-2-1-Draw!” to start the shootout.  Choose a player to initiate the shootout if all players are in it.  Players then simultaneously roll their dice.

Players roll and re-roll their dice as fast as possible.  When someone rolls any symbol they shout “Hit” and everyone stops.  If a bullet is rolled, the player who rolled it chooses and removes a token from the location.  If they rolled more than one hit, they resolve both hits.  If a runaway icon is rolled, the coward token of that player is removed from the location. 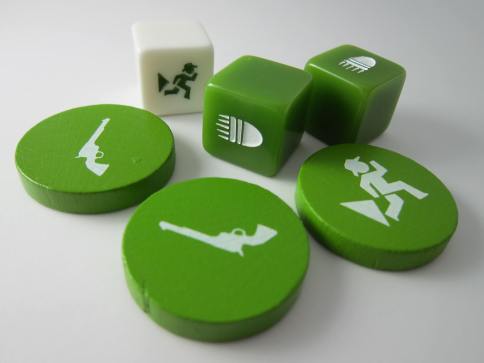 After resolving the hits, if there are still tokens left on the location, restart the countdown and continue to roll until only one player remains on the location.  That player will draw the top loot card from the location.  These loot cards count as end game points, and they can be used as action cards during the round.  Some loot cards must be played immediately, and others say when to play them.  Each location’s loot cards have different advantages.  For example, the stagecoach cards have weapons that help during a shootout.  The mine offer high risks and high rewards; there maybe a cave-in at the mine which would cause the player to lose one of their shooter tokens in the next round.

Misfires – If a player rolls early, restart the countdown. If someone calls a hit and there isn’t one, that player stops rolling and counts to three before they restart.  The other player may continue to roll.

Ties – When there is a tie and both players rolled a bullet icon, restart the countdown.  When the run-away icon is rolled, each player that rolled the symbol removes their coward tokens. 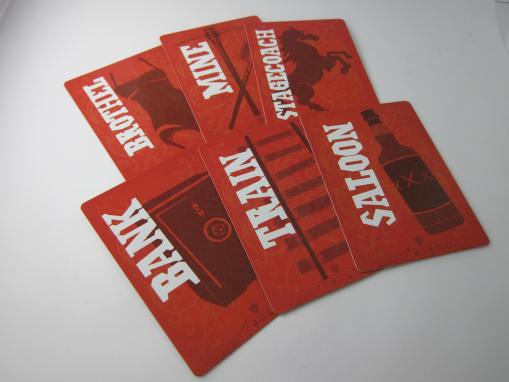 After the first round, each player takes all three tokens (unless specified by a card) back.  The next round continues as the first except that a there is a new start player, and players may play loot cards.

Start player rotates to the left at the end of the round; the new start player will take the whiskey bottle and place the marshal token on one of the locations.

The first player to rob each location also gains the “Own This Town” bonus card. 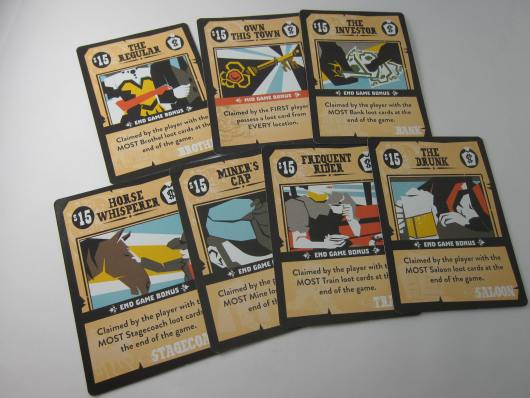 The game ends at the end of the round when one of the location’s loot stacks is empty.  Reward bonus cards to the player who has the most loot cards from a location.  Resolve ties with a shootout of one die each.  The player adds up their loot cards and the player with the most money wins.  If there is a tie a shootout determines the winner.

Simultaneous dice throwing with a western theme for a quick, exciting game for the family.

The components are good quality, and two items were very unexpected.  The dice are nice and chunky, but I have noticed a few marks after a few plays, luckily the etching is nicely painted and should last.  The dice are a good shape for quick rolling since they mostly have square edges.  This is important because you don’t want them to go too far during a shootout.  The contrast of the symbols is also easy to read, which is helpful because of the speed of the game.

The cards are a good quality, and the graphic design makes them easy to read and understand.  I like that the iconography of the cards helps you quickly note the locations when in your hand.  This is important when you want to check if you won the “Own the Town” bonus card and for end of the game scoring.  The location tiles are colorful, easy to read, and made of thick cardboard, their size is perfect for the discs.  The tokens are nicely painted wooden discs which are clear and easy to see.  The whiskey bottle and marshal badge are very cool, and a bit of a surprise.  The whiskey bottle spins quite well, and it is fun to pick the first player at the start of the game.  It’s an excellent way to make sure there are no arguments over who it gets to be first player.

The box insert is very well done and holds all of the components securely so everything fits perfectly in the box. 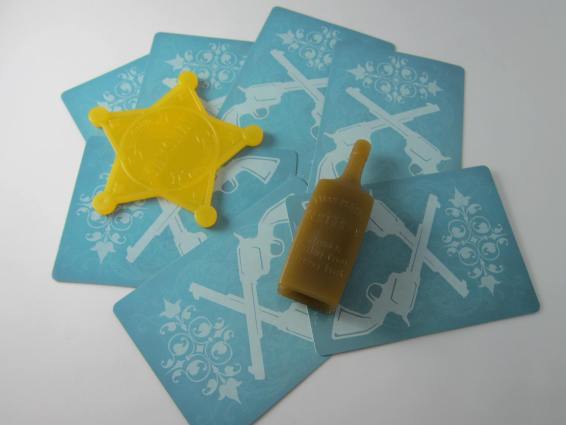 Rulebook
The rule book for Boomtown Bandits was easy to read, written in a logical order, and clear.  The rule for multiple hits was a bit confusing, but after reading and playing one round, many of the questions we had were answered.  The picture of set-up was helpful and a must in any rule book.  There were some well-written examples of rounds and scoring as well. I also like the rule that there is never a tie in the game, any tie is resolved with at shootout!  There was no rules summary on the back of the rule book or a player aid.  Putting credits in the rule book is nice, but a summary is a better use of space.  The cards may be a bit confusing for a first-time player, and multiple plays will give you a better sense of when to most optimally use a card.

There were mixed reviews of Boomtown Bandits in my family, the main point of contention was the real-time dice rolling.  If you do not like real-time dice rolling, you won’t like this game!  I enjoyed this mechanic and had a great time during the shootouts.  I felt that they were a lot of fun, and they could get very competitive.  Others didn’t enjoy the simultaneous action, and thus didn’t enjoy the game as much.  This game is all about dice, so there is a lot of luck.  Luck may not go your way, and multiple rounds may go by without winning a single loot card.  I can see some younger players getting upset when they lose multiple shootouts.  The cards do allow for some luck mitigation and can make it easier to win a shootout, but if you aren’t winning them in the first place, there could be a problem of the rich getting richer.  Luckily the game is quick! 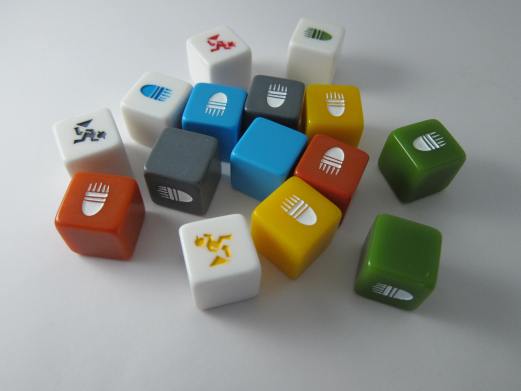 The cards are very helpful so don’t be afraid to use them.  When and how to use the cards may be confusing for new players, but after a few games players will get the hang of them and experienced gamers will catch on quickly.  A few of my favorite cards were the ones that let you place your discs last, or peak at other player’s discs.  I had fun using these two together to put my discs where it was to my best advantage.  The fact that each location has a certain advantage adds strategy to the game.  The loot cards give you flexibility and advantages over the other player, and add a bit of take that to the game..  The locations add to the variety and each location feels different, and depending on your strategy you may prefer one over another.  I like the risk / reward aspect of the mine.  A disadvantage of the cards is that they may slow down game play.  When a player reads a card after looting it, or looks at their hand to decide when to play a card, or checks if they won the “Own the Town” bonus card other players may be left waiting for them.  In a few of our games someone took time to read a card but was involved in the next shootout and it slowed done the pace of the game.  Once you get to know the cards, this will be less of a problem.

If you want a game with little downtime and lots of player interaction, Boomtown Bandits is a perfect match.  Players are engaged at each stage of the game.  You may not be in a shootout, but you may start it and watch to keep the players honest.  This game did a great job of keeping everyone involved and focused on the action.

The Bonus cards awarded at the end of the game are very important and players need to keep them in mind as they choose locations to loot.  A few times we had a player win because of these cards that we didn’t think was close to winning.  But this also shows that no one is out of the game.  You may not have a lot of cards, but they could be worth a lot of money and winning a bonus card adds fifteen dollars to you total. 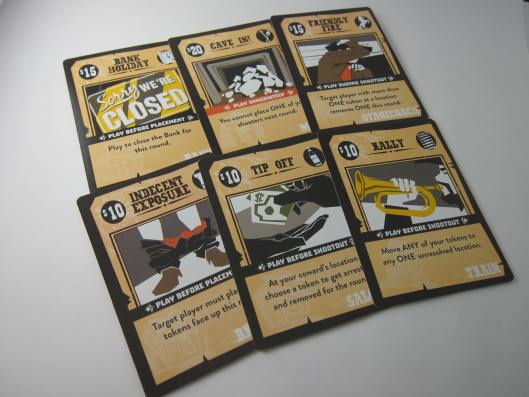 Boomtown Bandits is very light, quick to play, and engaging.  The production and components are top notch.  The theme fits the game because of the real-time dice shootouts.  The strategy is light, but it comes from where to place your discs and the loot cards.  The shootouts will be fun for some, but may turn off others, so know your preferences.