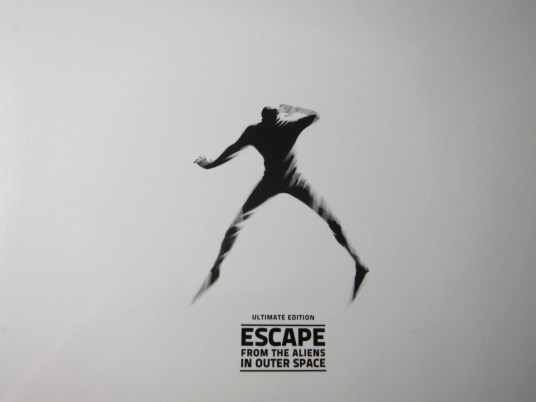 The spaceship SELVA was close to finding a cure for a degenerative brain illness.  Yet now, what seemed to be the cure is cause for concern.  Researchers had implanted alien spores in the cerebral cortex of  subjects, but something went wrong and those subjects attacked.  All communication with the space station has ceased.  With their ship in chaos and darkness, the remaining humans must escape from the aliens or be turned into one themselves.  Escape from the Aliens in Outer Space is a hidden movement game.  No one knows who is an alien, and who is a human.  Through deduction of the other player’s movements and actions, you must determine who the others are.  Humans work alone and are trying to be the first to reach the escape pods, while the aliens must work together to track them down.

Set up is very quick as each player takes a marker and a map book.  Players should decide which of the maps they will play.  The dangerous sector cards should be shuffled and put into a face-down pile on the table.  Half of the players will be aliens, and the other half will be humans.  A player’s identity is secret information so to determine which a player will separate the character cards into alien and human piles.  Take cards from each deck equal to half the number of players and shuffle these together.  If there is an odd number of players, draw the extra card from the alien deck.  In in a game with an odd number of players, there will be one more alien than human.  Deal each player one of these cards; a red card means the player is alien, and a blue card means the player is human.  Players need to keep their identity secret from the other players.  Each player, whether human or alien, has a special ability that they may use once a game.  For example, a human player may be the medic, and they may force another player to reveal their identity once during the game, of course, they themselves must reveal their identity to do this.  An alien may be the lurking alien who can choose to directly attack the sector they are in instead of moving.

To finish setting up, shuffle all the escape pod cards and place them face-down on the table.

The map shows the eight different sectors of the SELVA and each hexagon on the map is called a sector.  Each hexagon is identified by a letter and a number that represents the coordinates of the sector.  A white sector is a silent sector, and a gray sector is a dangerous sector.  Special sectors are the human sector, the alien sector, and the escape pod sectors which are marked with symbols, not letter and number coordinates.  Opposite the map is the movement record.  The movement record on the opposite page has spaces numbered 1-40.  These are for players to write down their coordinates for each round, and initials of any items the player used.

The game is played over a series of rounds, in which each player must move his or her character.  Aliens may move one or two sectors, while humans may only move one sector.  Players move by marking their location on the movement record, so their movement is kept secret.  Players record their location by writing down the coordinates, and players must move each round.

If a player ends their movement in a silent sector they declare “Silent Sector” at the end of their turn.  When a player ends in dangerous sector they draw dangerous sector card and follow the directions of the card.  If they draw a red card this is a noise in your sector card, and the player must announce their current location.  A green card is a “noise in any sector” and the player may fake their location by saying the coordinates of any sector they choose.  Both noise in your sector and noise in any sector cards are are discarded face-down next to the draw pile. 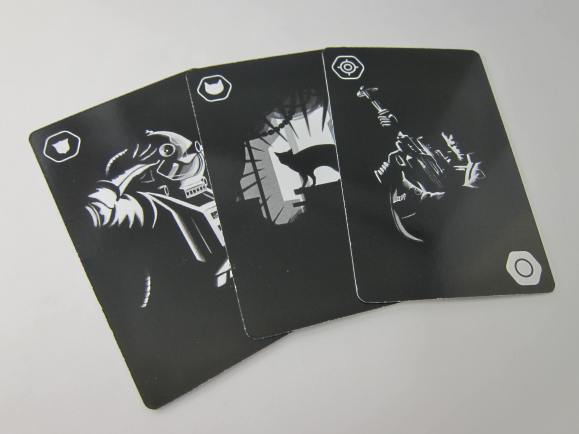 A player may also draw a Silence card, if they do they say “silence in all sectors.”  These cards are kept by the player as they may also show an item.  The items may only be used by human players, but some aliens have a special ability that allows them to use items.  Items may be used at any time during a turn, unless they say otherwise.  If a player uses an item, they must reveal it to the others and keep it face-up in front of them.  When the draw pile needs to be reshuffled, Silence in all sector cards are not put back into the deck.  There are ten different types of items including an attack card that allows a human to attack with the same rules as an alien, an adrenaline card that allows the player to move one extra sector on their turn, and a defense card that allows a player to not be affected by an alien attack.

Alien players may attack at the end of their movement.  Aliens attack by announcing the coordinates of the sector they are attacking.  Any other player must announce if they are in that sector.  Any player, human or alien, in the sector is killed.  They discard their cards and reveal their character card.  A alien player is out of the game, but human players turn into aliens and start their next turn in the alien sector, but they do not keep their special abilities.  The first time an alien kills a human their speed increases by one.  They may now move, one, two or three spaces a turn. 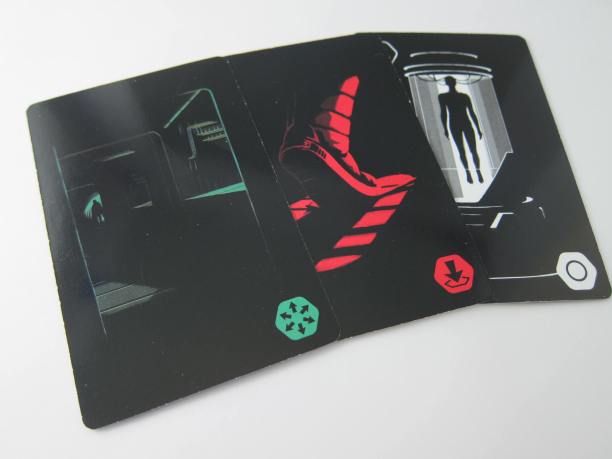 When a human player reaches one of the escape pod sectors they must declare the pod they have reached and draw one escape pod card.  If they draw a red card the pod has been damaged and it cannot be used.  They must continue their escape on their next turn.  They may not be attacked in the escape pod sector.  If the player draws a green card, they have successfully escaped, but no other player may use that pod, as it has left the SELVA. 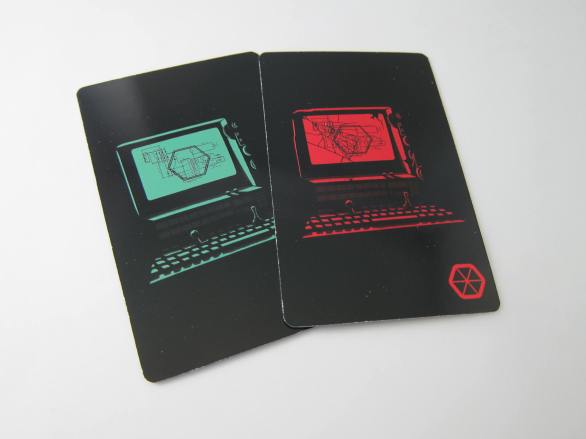 End of the Game

There are several ways the game can end.  If humans can no longer escape because all of the escape pods have been used or damaged, the remaining humans are eliminated from the game.  The game also ends after forty turns, or after the last human player is eliminated or escapes.  Humans that escape the SELVA win.  The aliens win if they eliminate the last living human on board or after forty rounds and there are still humans on board the ship.

Escape from the Aliens in Outer Space Ultimate Edition is a game of bluff and tension that is quick paced and fun throughout.  The rules are easy to understand and with virtually no set-up so you will be playing and replaying the game in no time. 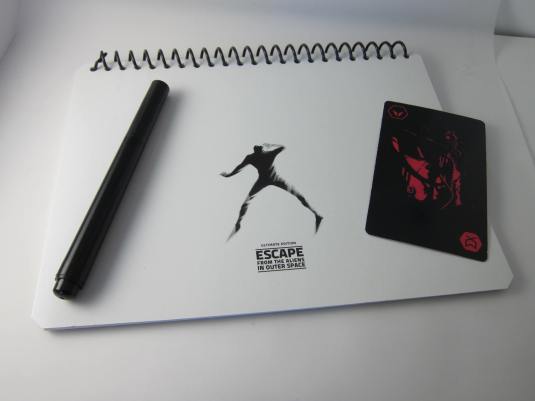 The Ultimate Edition comes with great components.  The cards are good quality and simple in their design.  Each is simply a picture and icons without text.  If you aren’t sure what an icon means, they are explained in the map book.  The bad thing about the cards is the black edges.  This makes the cards easy to mark up, and because it is so important that you don’t know the identities of the other players sleeving  the cards may become a necessity.  The map book is very well done.  There are eight different laminated map and a movement record for each one.  The movement record also has a description for each icon which is a very helpful reference when you draw a card.  The back of the map book shows the icons and special character powers.  The markers are also okay as they write and wipe off well.  The map book is black and white, but I wish the dangerous sector card icons were colored for easier identification.  I know this would add to the cost, and it is fine without color, but I feel the color would add to the readability.

The rulebook is well written and easy to read.  It is very easy to learn the game and after reading the rules we didn’t need to look back through them to answer questions.  The icons guide was helpful in this regard.  There are also descriptions of each map and a suggested number of players.  Each section has examples for clarification and attention boxes alert you to different things you should keep in mind when you are playing.  The spiral bound books are nice to play with and it is easy to write in and keep track of the other player’s movements. 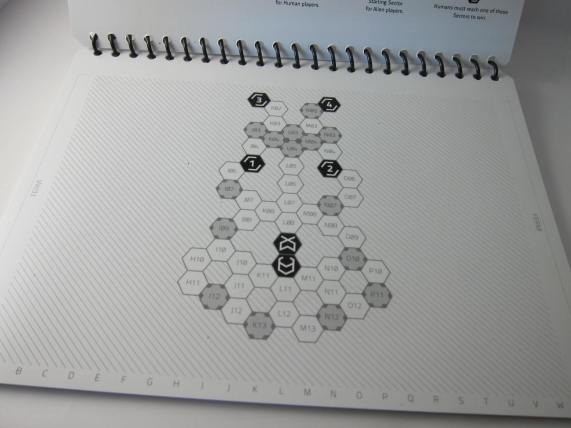 There is a lot of tension as players try to discover what the other players are.  If you enjoy bluffing and hidden movement then Escape From the Aliens in Outer Space is the perfect game for you to try.  The game is easy to learn and to teach and I think any level of gamer would be able to play in a few minutes.  The depth of the game play is not in the rules by in the decisions you must make during the game.  The game can be pretty tense and may give you that scary alien movie feel.  It can also depend on the group you are playing with.  Some people are good at bluffing and others, like me, are not.  I had trouble when I would get the noise in any sector card as the human player.  It wasn’t easy for me to pick a position that I could possibly be in without giving myself away.  I do like that you may or may not be giving away your correct location, this leaves the others guessing.  Items are very useful, but the human player needs to be very careful about using one.  The aliens may have a special ability that lets them use the an item, but because you have to show the card when you use an item it may make it obvious your are a human.  In the very least it may make the others suspicious. 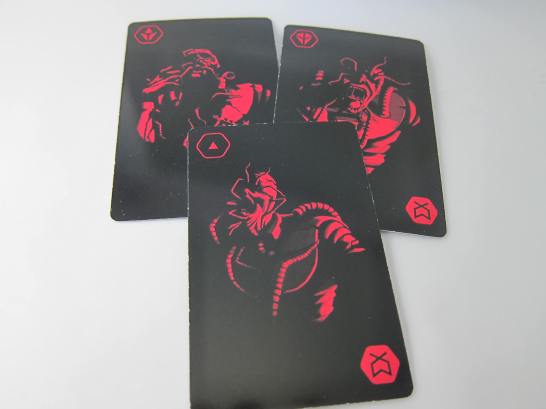 The game is a logic puzzle of trying to figure where the others are, how to get to them, or how to escape.  I also think it is interesting that the humans are working alone, but the aliens work together.  Aliens have to be careful about showing that they are an alien too soon.  One thing that will turn off some people is the fact that there is player elimination.  I accidentally killed another alien during one game and he had to sit and wait for the game to end.  Now, games are fast so it wasn’t that long and he tried to keep track of our progress while we finished the game.  Still, this is something you want to consider when you buy the game.  We also found that in a three player game, it was very difficult for the human to win.  Even in the game that I killed the other alien, we still won because I found the human.  I also wouldn’t recommend this for two players, the tension of trying to figure out who everyone is is gone in a two player game.  Three players was okay, but the game will shine with a higher player count.

A map, markers, and a few cards are able to create a tension filled game of bluffing and logic.  The game is truly greater than the sum of its parts.  The easy to learn rules and meaningful decisions will keep players engaged and tense as they try to escape or attack. 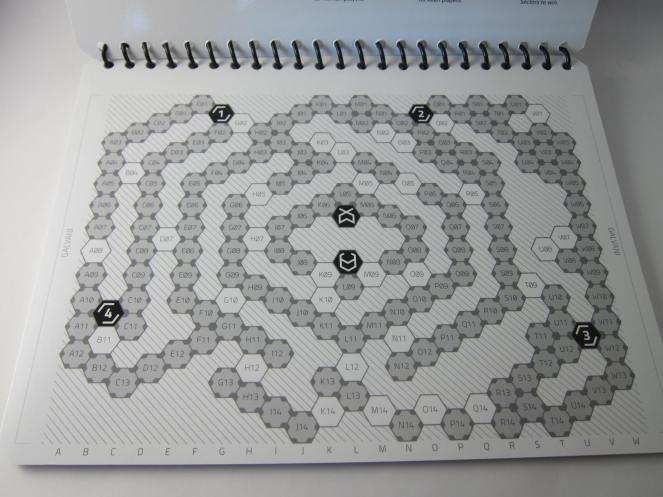