Scrabble and Boggle are classic word games that families can enjoy playing together. Letter Tycoon is a newer word game that takes the timeless mechanisms of these games, and updates them with meaningful decisions and different paths to victory making it approachable and family friendly.

Letter Tycoon comes with 26 letter patents; vowels are colored orange and consonants green. The less common consonants, B, J, K, Q, V, X and Z are cream colored because they give players special abilities. For example, if you own B, you earn double if your word begins and ends with a vowel. If you own X, you may use one letter card twice. These patents should be placed on the table within reach of the players so that everyone can see all the letters.

The 102 letter cards, or Letter Factory deck, should be shuffled, and each player should be dealt seven cards. Then create a community pool of three face-up cards in the middle of the table. The rest of the cards should be placed on the table to create the community pool. The thirty-five wooden coins in one or three denominations should be set on the table near the eighty-five stock certificates also in one and three denominations. Each player is also given a scorecard. These are very helpful to help you remember how much each word is worth. The back of the scorecard also has a reminder of the letter frequency. Finally, put out the goal card according to the number of players. This shows the target value of letter patents a player needs to own to end the game. 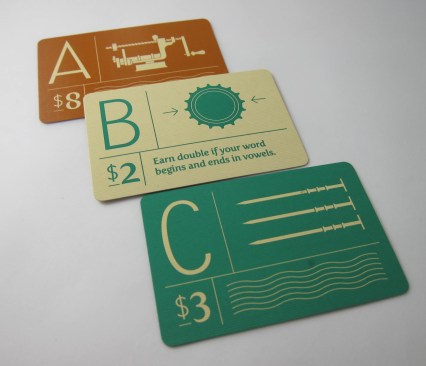 The 102 letter cards, or Letter Factory deck, should be shuffled, and each player should be dealt seven cards. Then create a community pool of three face-up cards in the middle of the table. The rest of the cards should be placed on the table to create the community pool. The thirty-five wooden coins in one or three denominations should be set on the table near the eighty-five stock certificates also in one and three denominations. Each player is also given a scorecard. These are very helpful to help you remember how much each word is worth. The back of the scorecard also has a reminder of the letter frequency. Finally, put out the goal card according to the number of players. This shows the target value of letter patents a player needs to own to end the game. 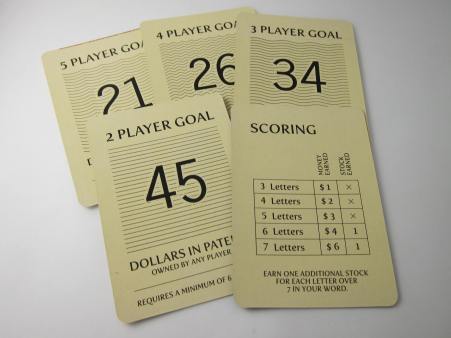 Give the first player the Zeppelin token.

At this time, the players should also agree on a dictionary to use to resolve any challenges that may occur. Words need to be at least three letters long to count and cannot be abbreviations, proper nouns, or words that require apostrophes or hyphens.

On a players turn, they have two options of action, discard or play a word. If the player chooses to discard, they take any number of cards from their hand, place them on the discard pile and draw the same number of cards back into their hand. 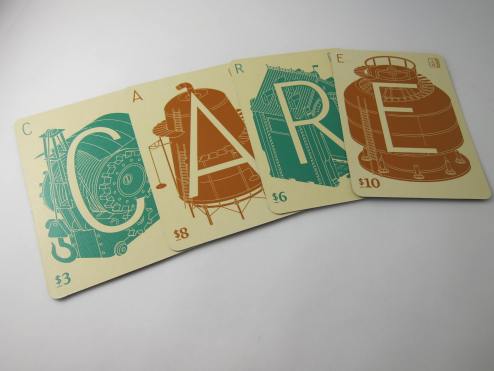 If the word played has a letter in it matching a patent owned by another player then that player earns a dollar ‘royalty’. A player does not collect royalties on their own patents, however. Also, if the player has a patent to add to a word, such as with the X, these do not pay royalties.

After a player has built their word and received their money (and possibly stocks) the player may buy a patent. A player can purchase any available patent that matches a factory card the player used in their word. 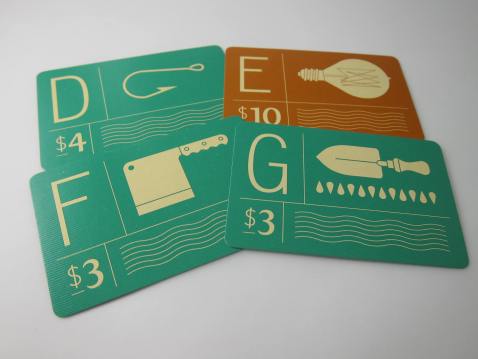 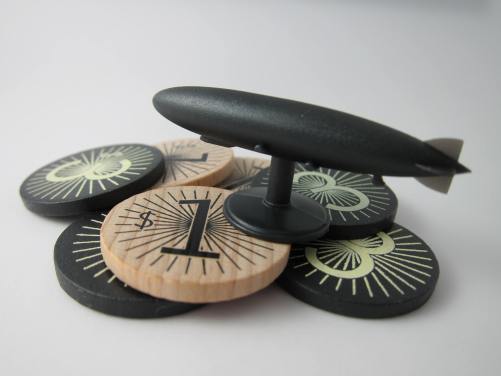 Overall the components of Letter Tycoon are very nice. The wooden coin tokens have a nice feel in your hand and the design is beautiful. The stocks are a thick cardboard. The cards have a nice, linen finish, and there are no dark borders. Some of our cards were a bit miscut, but this doesn’t affect the gameplay. The zeppelin first player token is very cool. It shows up in the game artwork, which creates a cohesive graphic design.

Speaking of graphic design and artwork, Letter Tycoon is beautiful. I love the cutout steampunk /architectural style design. It is simple, but gorgeous. The graphic design is also very thoughtful as it adds to, rather than detracts from, the game play. Vowels stand out in the patents, the letter factory cards are clear, and the goal cards help players remember the goal. The artist’s touch is everywhere in the game, even on the cover of the rulebook.

I also appreciate the excellent box insert. Everything fits snugly in the box and won’t move around. 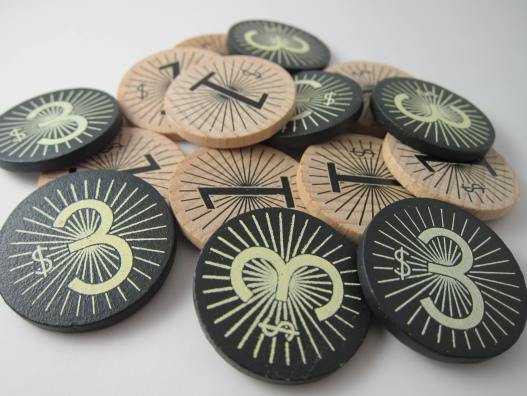 The rulebook has a very nice layout and the all the parts that I look for in rulebook. There is a nice list of components, a picture of set up and detailed description of the components. In the rulebook is the special rule that players should decide which dictionary to use for a challenge. While this won’t be needed for every group, it is nice for those who need it. The rules explanation is straightforward, and the examples are very helpful. I love the way it is shown in the rulebook. The rules are in a timeline form with examples right below them in the same timeline form. It makes it very easy to read and understand. The back of the rulebook has a summary of the consonant special powers. The player aide is helpful to show what a player earns from the word and the frequency of letters. 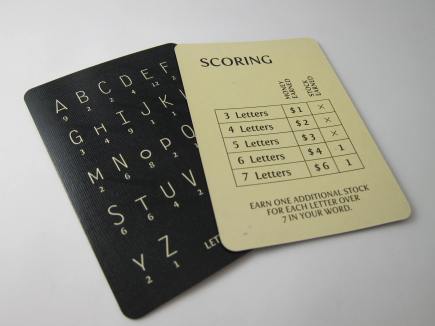 The rules for Letter Tycoon are simple to learn. The beauty of the game isn’t in the complexity of the game but the meaningful decisions in a simple rule set.

The game is quick, easy, and streamlined. You make a word, decide to buy a patent or not, and move on to the next turn. The game is also forgiving, allowing the player to discard as many cards as they wish at the end of their turn. This way you aren’t stuck with cards you can’t use. Using your turn to discard can be punishing so we rarely saw this in our games. Players usually tried to make at least a three-letter word on their turn and then discard those unwanted cards. You also have ten cards to choose from with you hand cards and the community cards. These rules allow for flexibility and keep the game moving. 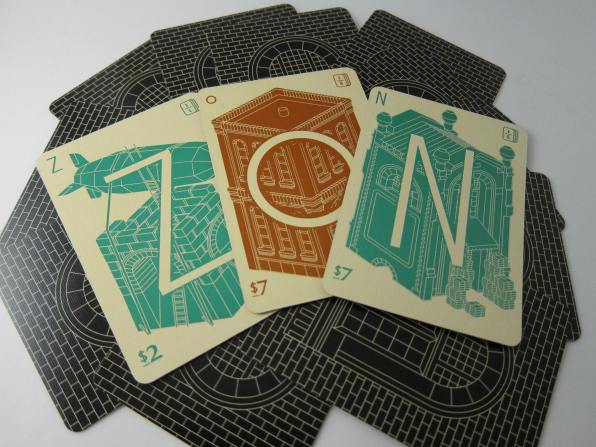 If you enjoy word games such as Scrabble or Paperback, you will enjoy Letter Tycoon. If you are good at making long words you will excel at Letter Tycoon. What sets it apart from other word games are the patent cards and stocks. Gaining money from patents is a very important part of the game. Getting the patents for words can lead you creating words with specific letters. You aren’t just making words to get a score; you are creating words to buy a particular patent. You may wish to buy the common vowels, but they are expensive, or one of the special ability consonants that are rare but can be very useful. There are multiple paths to victory and sometimes the cards you draw will lead you in a certain direction.

Patents are not just victory points or a way to gain money in the game. They add to the interactivity of the game. Do you make a word with a letter in it that is owned by another player or do you try for another word. You don’t want to give your opponent money, but that letter could help you create a longer word and get money for yourself. 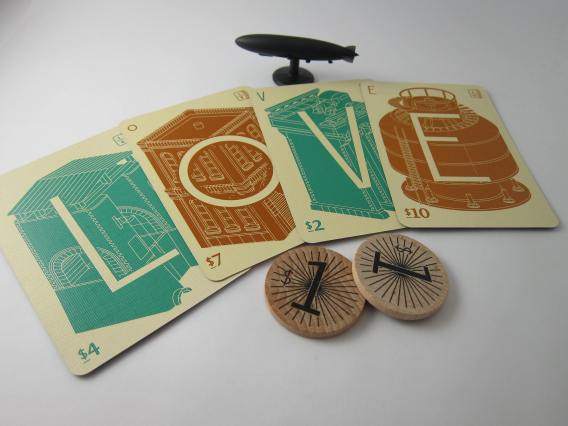 The game doesn’t go a fixed number of turns; instead the last round is triggered when a player controls patents equal to or greater than the goal number. This means players can control the end of the game and end the game when they are sure they can claim victory. Because players all get an equal number of turns others can try take the last turn to take that victory.

There are some concerns I have about Letter Tycoon. The mechanisms are simple and balanced, but an adept wordsmith will unbalance the game, though this is expected with any word game. A player who does not enjoy word games will not like Letter Tycoon. A player may also be overwhelmed by the ten-letters available to them to make a words and may have a hard time deciding which word to make. Patents can help guide, but as a player decides which ones to buy they may experience analysis paralysis.

The end of the game can also slow down, as players look at all the possibilities that they have to gain the most points. There is a lot to weigh and make decisions about at the end of the game. 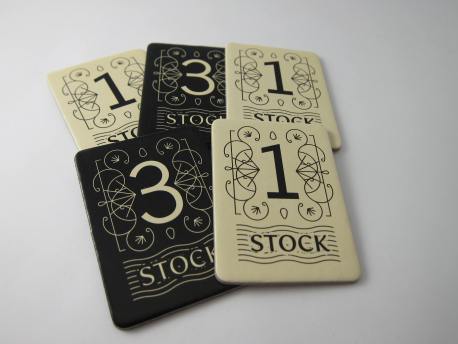 The straightforward mechanics, elegant design, and patents makes Letter Tycoon stand out from other word games. It also makes it more of a gateway game and I feel it will have wider appeal compared to other words games like Paperback. 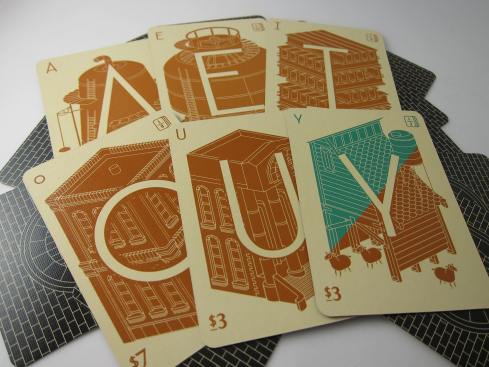 I received a review copy of this game.

Poop the Game: A Review