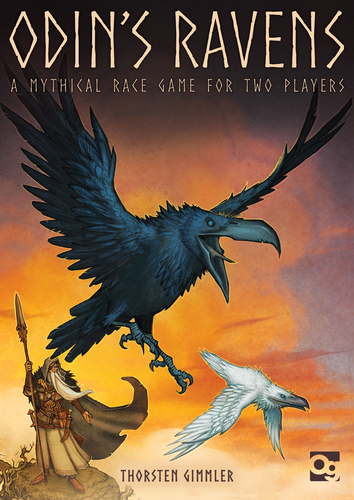 Out of print form many years, many called for a reprint of the classic game Odin’s Ravens, and it looked like it would happen with the help of Kickstarter.  The game reached its funding goal on Kickstarter but was never made.  But this disappointing story turned happy when Osprey Game stepped in to publish the game.  They offered a free copy to everyone who had backed the Kickstarter, making Osprey a pretty stand-up company wouldn’t you agree?

Odin’s Ravens is a game in which two players take on the role of Huginn and Muninn on their daily flight across the Earth watching over the land for Odin.  This daily flight has become a race between the two.

Odin’s Ravens is a small game with few components.  There are sixty-six player cards.  The 50 flight cards are used to move on the flight path, and each player has twenty-five.  Each player also gets eight of the sixteen Loki cards.  It is easy to tell the players cards apart because the color matches the raven.  Each player also takes their wooden raven.  Each player should shuffle their two types of cards separately and draw five cards in the combination of their choice.

Create the flight path with 40 land cards.  Shuffle these land and place a line of sixteen cards in a line.  The cards have two spaces on each card to form the flight path.  As the land cards are placed, there are some rules to keep in mind.  No two spaces in a row should show the same type of land.  If this happens, rotate the card 180 degrees.  If the lands are still the same, return the second card to the bottom of the land card pile and place a new card.

After completing the flight path, each player puts their raven at one end of the path.  Each raven should be on a different route.  When they reach the end of the line, they should switch to the other side and fly back down the line.

On a players turn they choose the cards from their hand they wish to play.  They can play as many as they wish, but they have to have the right cards.  There are two actions the player make take:  flight, trickery.

Flight – To “fly” or move their raven the player must play a flight that matches the next path space.  For example if they want to move to the forest, they must play a forest card. 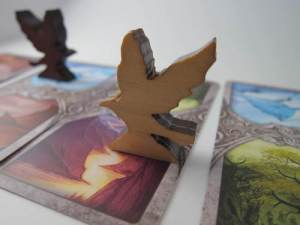 Trickery – The player may also want to use their Loki card for their benefit or the determent of the other player. Each Loki card has two different available actions. For example one Loki card allows the player to rotate a land card 180 degrees, or remove a land card. The player may only use one of the actions. Also, the Loki cards cannot be used on a land card where with a raven. When a player plays a Loki card, it is removed from the game.

After the player has finished playing their cards, their turn is over, and they draw three cards. Each player has a hand limit of seven and must discard any cards over seven. 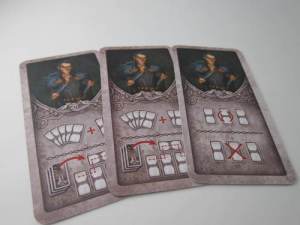 As soon as a player moves their raven to the last space on their opponents side, the player is the winner. If that player was the first player, the second player is given one more turn to finish their flight, and if they can, the winner becomes the player with the most cards in their hand. If there is still a tie, the players play a new game.

Sometimes a out of print game is loved more for the memory than for the actual game play and remaking that game risks bringing back a poor game. Would that be the case with Odin’s Raven’s even though it had a great redemption story?

The cards are unique as they are long and skinny, and different from any card I have seen. As the entire game is made up of cards, it is crucial for these cards to be quality and fortunately they are god quality. I was not sure how I would like playing with them, but the have a good feel and are easy to hold in your hand. Unfortunately, some of the cards are not consistently cut. 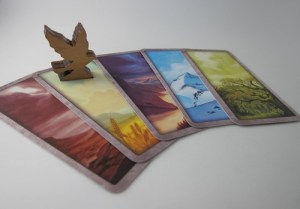 The artwork of the game is beautiful and sets a welcoming tone for the game. I like that the backs of the player cards are similar but different enough to set them apart, and they match the raven. The graphic design is well done and when set out the flight path becomes a beautiful panoramic.

The wooden ravens are also good quality, and it is nice that the points are slightly rounded so no point is too sharp. They are a good weight as well and fun to move along the path.

Because Osprey started as a book publisher, a lot of thought went into the design of the box. It has the look of a book and opens with a magnetic closure. I was worried it would mean the box would risk opening unintentionally, but it stays closed very well. Because of the way the box opens it is also vital that the insert holds the cards securely. The cards and ravens have their space and stay safely inside the insert. A lot of thought went into the box, and it is lovely as the game.

The rule book is well written and has most of the important parts I want to see. The book starts with a nice component list with pictures. There is a nice picture of set-up to help players get the game ready. There is not a summary on the back, but truthfully the rules are simple enough not to need a summary. The rules are also short enough that a player can glance through it to find the answer to their question. The book does an excellent job of thoroughly explaining the rules and after reading it, we had no questions or confusion about how to play the game. It is easy to learn the rules, set-up, and play.

The rule book is also written on quality paper that speaks again to Osprey’s experience in publishing books. You know that the rules will stand up to repeated use.

Odin’s Ravens plays in about fifteen minutes to half an hour which is the perfect time for the game; it doesn’t overstay its welcome. The game breaks down to a simple race between the two ravens and because it isn’t complex the game would be perfect for families and couples. This doesn’t mean that the game isn’t deep, the rules are simple enough to learn; the complexity comes from the decisions.

Smart hand management and optimal card play will allow the player to win the game. From the start, you can choose what combination of cards to start with. You may wish to start with all land cards to give you the most movement options. A combination of Loki and land cards will let you start manipulating the flight path on your very first turn, but any used Loki cards are gone. You need to be careful how and when you use the Loki cards. The choice between the two actions on the Loki cards adds to the strategy and the players decisions. 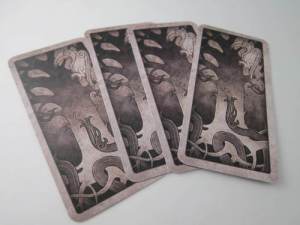 The Loki cards also mean that the flight path will change during the game. I like this fluid movement of the flight path. You are never quite sure what your path will be by games end and the manipulation the path is a fun part of the game. 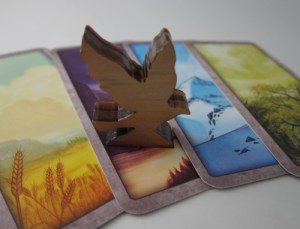 – Abstract theme
– Limited to two player (not a bad point for me!)

The design of the game from the box, to the rules, to the cards is outstanding. Odin’s Ravens is a hand management race game of trickery and manipulation. The simple rules and meaningful decisions prove it was a wise decision to reprint Odin’s Ravens and Osprey did a amazing job with the production.

I received a review copy of this game.