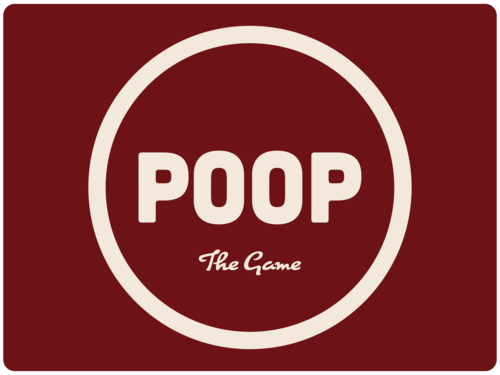 Silly, slightly inappropriate games have become popular with the help of Kickstarter.  Cards Against Humanity, Exploding Kittens, and now Poop The Game have delighted many.  These are party games that don’t take themselves too seriously and who aim to bring laughter and enjoyment to their players.

Poop the Game is a card game in which players are trying to be the first to get rid of all of their cards.  Players take turns “pooping” or placing down cards while trying to avoid clogging the toilet.  The game comes with both toilet and poop cards.  The poop cards come in three different colors, yellow, red and blue.  These cards also range in number from zero to four.  Skip and reverse cards are also in the poop deck.  There are also four rules cards: one main rules, four poop remix rules, and a two-player variant.

To start, shuffle the toilet and poop cards into two separate piles.  Deal each player five poop cards, and the first toilet card should be turned face-up to start the game. 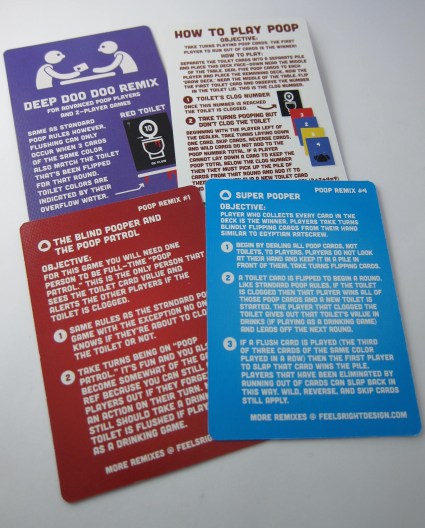 Each toilet has clog number that is shown on the toilet lid.  If this number is ever reached the toilet is clogged.  Players take turns laying down one poop card from their hand.  These may be number cards, skip cards, reverse cards or wilds.  Skip, Reverse and Wild cards do not add to the total poop number.  If the player lays a wild card, they must perform the sound or action on that card for the rest of their turns.  If they don’t do so and are called out by another player, they must draw a card.  Some of the actions may be to pretend to wash your hands or to make a splashing sound.  Don’t worry, though, if someone else plays the same wild card they get to take over making the sound.

When a player cannot put a new card down to keep the poop total below the clog number, they must pick up the pile of cards.  They flip over a new toilet card and then lay the first card to start the next round.  When laying cards, don’t worry about the color, you can place a blue card on top of a red or yellow.  It only matters when there are three cards of the same color are played in a row as this flushes the toilet.  All the cards played in that round are then discarded and everyone, but the flusher, must draw a new card.  The player that flushed the toilet leads off the next round by laying a new card. 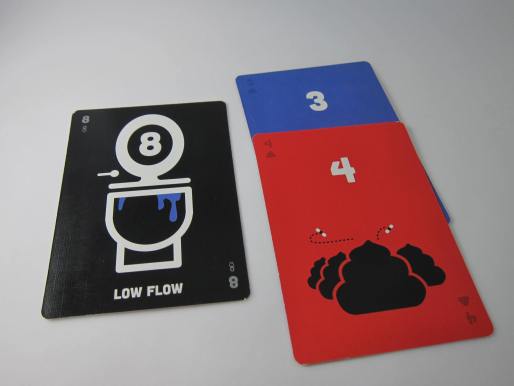 The game ends when a player lays their last card and has no more in their hand.  That player is the winner!

It won’t be a great fit for everyone, and many may be turned off by the game play if not the theme.  Those who can appreciate the humor, who need a new drinking game, or are looking for a game similar but better than UNO will enjoy Poop the Game. 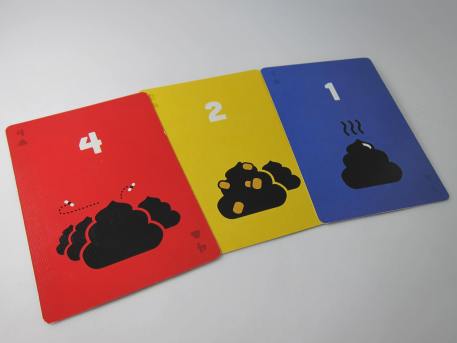 Components / Artwork
The silhouette artwork is humorous and made my group laugh when looking through the cards, the corn in the poop was a favorite picture.  It isn’t crude, which keeps it safe for the whole family.  There was a lot of thought that went into the cards’ design as the graphic design is very clear, with a small number in the upper left-hand and lower right-hand corner of the cards that help you read the cards in your hand quickly to find the card you want.  These numbers let you stack the cards neatly on the table without taking up too much room.  You can quickly add up the numbers on the top of the cards.  I like the linen finish as well, and the cards seem to be of good quality that will stand up to some use.  The black toilet cards were already showing wear, however, but this doesn’t affect gameplay because the back of the cards is a cream color that doesn’t show marks.

Poop the Game makes the perfect gag gift as it comes in a brown paper bag that gives you the warning that this package contains poop.  You can even send the game in the mail this way so it will show up on your friend’s doorstep.  It’s a quite humorous package and contains the extra bonus of the Party Pooper Edition of the game that adds higher number toilets and more poop for more players. 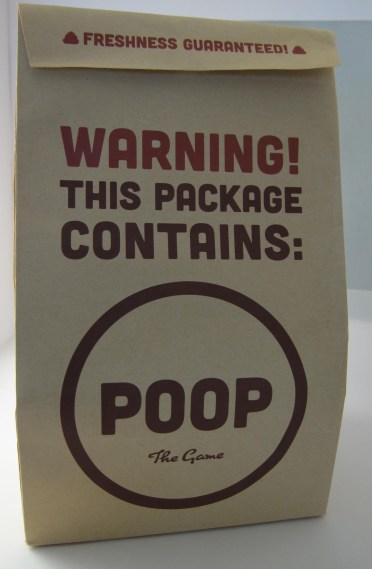 The rules are very simple to learn, and you can teach the game quickly.  It’s similar to UNO in some ways, so players may be familiar with the basics of some of the cards like skip and reverse.  This can be a poor comparison, though, because players may get stuck in the thought that you have to play the same number or color card, which you don’t need to.  It doesn’t say this in the rules, but there is a picture that shows it, so I wish the rules had made this clear.

I also like that the game includes different variant rules, including drinking rules which may help to loosen some inhibitions with making those sounds.  These variants let you tailor the game to your audience.  For example, you may add some tension to the game with Poop Remix #1 The Blind Pooper and the Poop Patrol.  This variant has the same rules as the base game, but all players, except the poop patrol player, don’t know what cards have been played and if they are risking clogging the toilet. 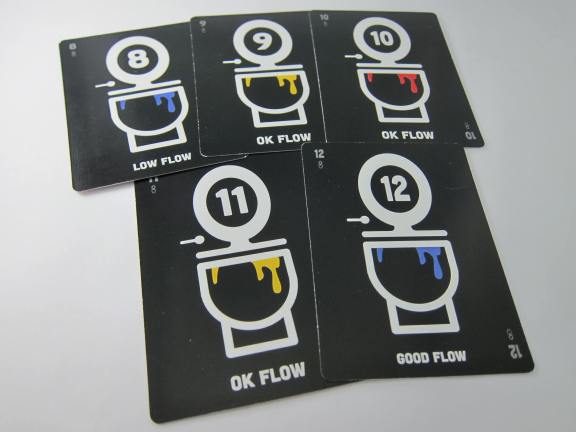 This game is all about being funny and humorous, there are not a lot of strategies or deep thought, but that’s pretty obvious with the name.  It plays quickly and is easy to teach.  There aren’t any truly meaningful or compelling decisions to make during the game, and your strategy is pretty clear – don’t clog the toilet.  If your group likes the humor and the topic, they will laugh and have fun.  If they are comfortable making the gestures and making the sounds, they will have even more fun.  The group has to make the game work; Poop the Game is a tool to facilitate silliness in a group.  You need to know the group you plan on playing with to know if they will enjoy the game or not.

I can picture many middle school boys laughing hysterically at this game and enjoying themselves completely, but it wasn’t the game for my family.  Most of us laughed at the humor and felt it played OK, but I don’t enjoy the silly sounds and gestures.  I also want to have a bit more game, and I worry about the replay value.  You may become bored quickly so the variant rules may be essential to keep it fresh. I have compared this game to UNO already, and UNO continues to be a popular game so Poop The Game may be in good company.

If you like the humor, enjoy quick playing games, and aren’t afraid to make fart sounds or pretend to wipe yourself with a card, then you will enjoy Poop the Game.  It isn’t for everyone, but it will make almost anyone smile. 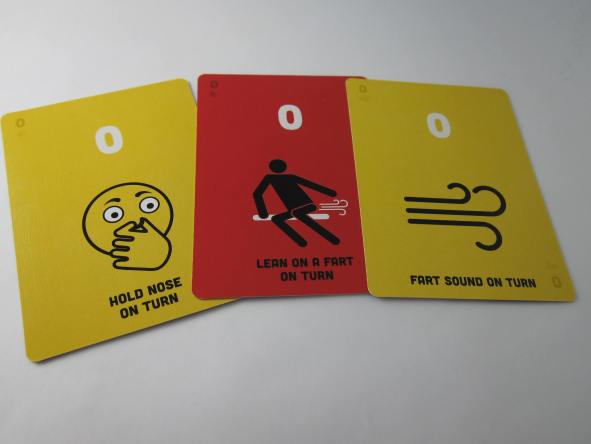