FROM THE DESK OF TFG1MIKE! TFG1Mike here, and I’m taking a slight break in the “more personal” aspect of From the Desk of Me… In order to give you a totally tubular review of the TMNT – WWE Ninja Superstars action figures coming soon! So today with the HELP of PIXEL DAN I present to you….The TMNT as WWE Superstars!

The WWE has always done several crossovers. At least since they rebranded from WWF to WWE. We’ve had Scooby Doo and the WWE, The Flintstones and the WWE….. so why not The Teenage Mutant Ninja Turtles and the WWE!?? When I saw that Pixel Dan had uploaded these reviews… I was very interested in seeing what the heck they were. Obviously by just looking at a screenshot and the title of the videos I knew what they were, but just how in the world could that work…. I mean the TMNT and the WWE…. is not a connection most would make. So while Pixel Dan gives you a full in-depth look at each figure below, I’ll be giving my thoughts on the characterization matchups above each video that is embedded.

Donnie as The Undertaker

This might be the only one that the characters don’t match up logically, but after all this is the WWE and logic goes out the window most times. I love the look of Undertaker Donnie, just how they molded everything on the figure. Donatello is the brains of the TMNT, and while I’m sure The Undertaker is a very smart man, he’s more monster than brains in his characterization within the WWE. However I love just how Undertaker Donnie matches up with the rest of the Turtles here! Check out Dan’s Full review below.

Leonardo is the leader of the TMNT, and most would say since 2002 that John Cena is the leader of the WWE locker room. Like him, love him, loathe him, no one can deny the work ethic Cena has put into the WWE, and everything he has done in and out of the ring for the company. Leonardo as the leader of the four brothers here really fits in with the Cena characterization! Each of the personalities compliments one another, and I can so here Cam Clarke from the 1987 TMNT series saying John Cena lines like… “You Can’t C Me!” You can check out Dan’s full review below.

This sooo fits. I know Sting was from the WCW days, and I have to admit that I hadn’t watched a lot of the WCW stuff wayyy back when it was airing. However I saw his return run a few years ago on WWE, and Raph as Sting is a really good pairing. They both are intimidating at times, and have anger issues. Hey look kids a trash can lid without the trash can! You can check out Dan’s full review below.

Mikey as THE Macho Man!

Once again another characterization that meshes well with both entities. Macho Man Mikey Savage might be the BEST pairing of the 4 Turtles. Both he and Randy loved having fun and partying. The way everything from Macho Man is molded into the Mikey character is great. I’m not sure what a Greg Cipes Macho Man would sound like, but since these figures are the Nick Turtles and the WWE we’ll just go with it. Hey kids look the actual Trash Can is here too!! You can check out Dan’s full review below.

HUGE THANKS TO PIXEL DAN for these video reviews. I have not been into Toy Collecting for about 5 years now, but I still watch all my YouTube pals reviews of stuff I’m interested in, and these by far are figures I SOOOO WANT!!! I haven’t had a want or need to get any toys in a long time, but these yeah I want them for my shelf and I want a second set to keep in the boxes to display them that way.

As of this writing and at the time of Pixel Dan’s videos these have not been released yet, but I’m sure they will be for the Holiday Season. As Dan says in his videos they’ll be Wal-Mart exclusives!
I’ll be back with another FROM THE DESK OF ME the first week of December, before I leave for my California Christmas. COWABUNGA DUDES AND DUDETTES!!! OOOOHHHH YYYEEEEEAAAAAAAAHHH!!! 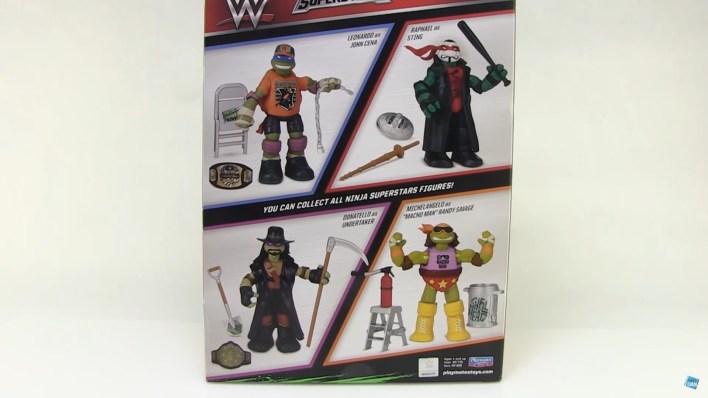