‘Transformers: War for Cybertron: Kingdom’, which premieres globally on Netflix on July 29, 2021, is one of those parts of the Transformers mythos that some are looking forward to but not for the reasons you’d hope for. Before I begin my review of the content, I will say that there are so many pros and cons that significantly affect this which I will get into below. Thank you to Netflix for the early access.

The Story Coming into Kingdom:

‘Transformers: War for Cybertron: Kingdom’: Having crash-landed on Earth, the Autobots and Decepticons are confronted by two rival Cybertronian factions from a future that their conflict has inadvertently created, as the heroes and villains of the classic BEAST WARS: TRANSFORMERS series make their WAR FOR CYBERTRON debut. Now the Autobots must team up with the Maximals to confront the Decepticons, who have joined forces with the Predacons, in the race to find the missing AllSpark. However, the Predacons are in control of the Golden Disk, a mysterious artifact which has a personal connection to Megatron and gives him an untold advantage over his enemy, Optimus Prime.  Which faction will triumph in the final battle that will decide the fate of Cybertron’s future?

What Can You Expect When It Drops On Netflix?

First of all, you can expect to feel like you have been for the previous two installments. That being said, there are some positives that were slightly learned since the last time. That being you won’t have to watch the dialogue at 1.25 or 1.5 to take it in at normal pacing. That’s the plus. The minus is, we still have bad voice direction and the choice for the Beast Wars voice cast is a mixed bag.

The visuals in this edition are similar to the others and some of the Maximals have some weird aspects to their designs. Those being Optimus Primal, Tigatron and Cheetor (Both look like the R.E.D. Cheetor design), and finally Rhinox (Resembles his Thrilling 30 toy). But the details otherwise are great for them which is better than I anticipated.

Megatron (Beast) however is terrible each and every way that he’s represented. It’s no secret to anyone that my favorite character is David Kaye’s version of Megatron. What irks me is that this version is so much of an afterthought and pales in comparison to the original character while it could have been better. He’s a glorified butt kisser of G1 Megatron. Literally is told to change his name at one point. His visual aesthetic is off, his vocals took me out of the show every single time he talked. For instance, listen to this clip of him in this, and my own voice doing the same lines. I’m no David Kaye but could have easily been a contender. But I digress. He just feels…hollow and is there as a toady and not a real leader.

I will admit that I am not a huge fan of the recent Transformers series. Machinima had potential but was a mess. This series is no different. This portion however I will state as being superior to the other two in the trilogy. But now that it’s out, it might warrant a run through all three parts to get a more complete picture.

Kingdom picks up with the crash-landed Autobots and Decepticons on their respective ships. The Autobots however meet their Maximal descendants due to them scavenging the Ark. The Decepticons, however, meet their Predacon allies in the forest. It then becomes a race against Megatron with the lines between factions being blurred heavily throughout this storyline and it is easily predictable if you know who does it all the time in past series.

There are some deaths but I’ll leave that to you to discover as you watch the final part of War for Cybertron rather than spoil the who and how it happens. We do get some surprises however with Scorponok being an over-glorified guard drone with copies of him about. He’s of little to no significance in the storyline aside from a prison scene with Airazor. We’re also missing Waspinator, Terrorsaur, Inferno, and Tarantulas. Oh, and if you were hoping for weaponizers or fossilizers, I figured this wouldn’t make the show, but you’ll be sorely disappointed here too.

I will admit, I may be overly critical of the Beast Wars portion due to my own bias of loving the original so much, and I went in with an open mind except for Megatron’s voice, and sadly I was disappointed on a whole. That being said, the story itself was probably the most coherent of the three and enjoyable even without the previous two parts of the trilogy. Can’t remember much of Seige and anything before Episode 5 of Earthrise and I watched it three weeks before watching Kingdom. 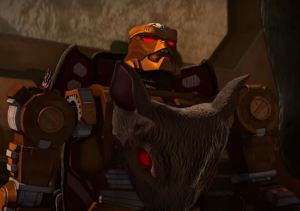 Okay, okay, so I’ve been crapping on it for most of the review. I do have some positives though which are again the payoff for this trilogy. We finally get a revisit to Beast Wars and although not perfect, it got us new toys, the characters back on the screen, and as close visually as can be possible for a new version. I enjoyed the pacing much better in this portion of the series and it wasn’t disappointing in that aspect. We also got the payoff of Nemesis Prime, Galvatron, and Unicron (albeit in short bursts, you’ll understand when you see it). Frank Todaro as Rattrap was the only saving grace in the Maximal cast. Honestly was my favorite here due to the emotion and voice he gave the character that was nostalgic enough to make me forget he wasn’t Scott McNeil. Speech is fixed! Also Prime is more Prime and less whiny.

Here, well, I’ve griped on various aspects above, there are more. In addition to missing aspects, hollow characters, lack of good voice direction, characters that had potential sorely lacked emotion in lines. The point being Airazor and Black Arachnia. They had ample time to be good but just sort of…sunk. Missed opportunity with Rattrap and “his great aunt Arcee” to have an interaction. Horny Black Arachnia. Primal doesn’t use his arm guns at all or shoulder ones. Just his swords and a generic gun. No Waspinator, Terrorsaur, Inferno, Tarantulas in the show. BW Megatron is lousy and a clumsy butt kisser to G1 Megatron Would have been better had he had a better voice but he’s a pale version of the original. Tigatron is anti-TIgatron in behavior and vocals. No fossilizers, No weaponizers. Every time any of the Maximal’s or Predacons talk, you think you’ll hear their original VA from the old BW show, and then when you don’t it just adds to the disappointment. The mcguffins of Machinima’s series was in full force with the Matrix/Golden Disc/Reading of Golden Disc/Allspark. So don’t expect anything different there.

With War for Cybertron over with, what would my thoughts be on the trilogy with this part included? Well, I am happy we got it and it has potential but please do better next time. They do somewhat tease a new series after this but it’s vague and in the dark except for a key quote at the end which again you’ll have to wait for the spoiler podcast review to hear about. But I think on our GCRN Rating Scale, I’d give:

While it does merit a watch, you’ll undoubtedly find issues on rewatching and during initial watching. It will take you out of the episodes despite not wanting it to. But there are a lot of great moments in this portion compared to the other two. Overall I’d rewatch this portion but this isn’t a series I’ll rewatch as often as I do Beast Wars.

Check Below For Images