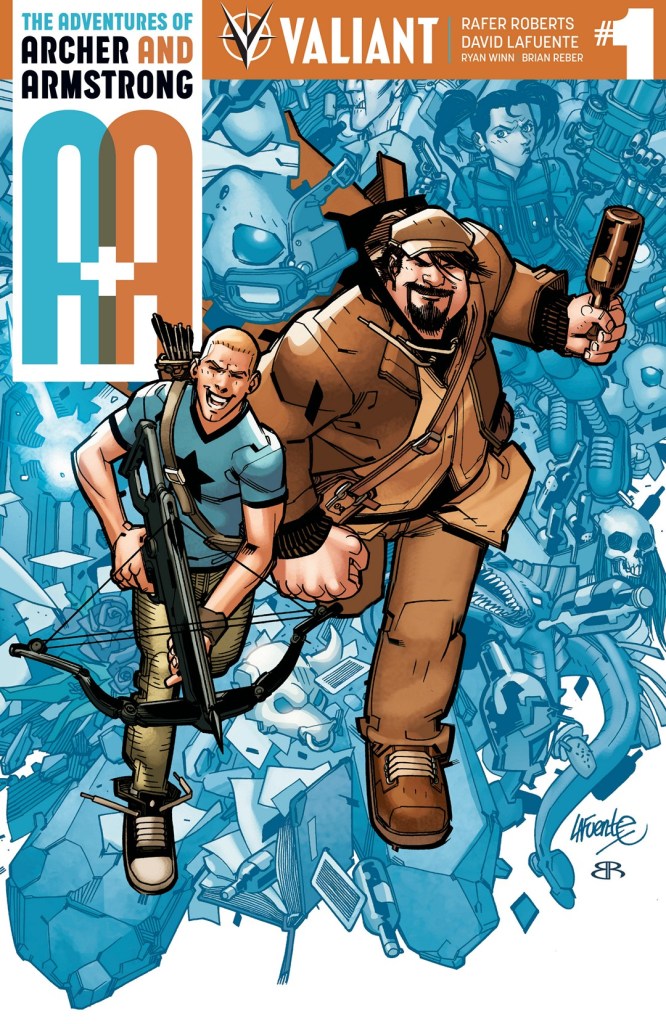 The world of comic books has a number of notable duos that are highly regarded. Although Archer and Armstrong may not have the notoriety of some of the more infamous duos like Batman and Robin or Bucky and Captain America they still hold a special place in comic history. In 2012 Valiant relaunched them in a brand new that was highly successful and now they are at it again with another ongoing.

This time Rafer Roberts and David Lafuente are at the helm. After the first volume it appears these characters are once again in good hands. The story revolves around Armstrong as he attempts to make peace with a mistake he made long ago. In true Armstrong fashion this journey sees him travel into his magical bottomless satchel to locate a bottle of whiskey he misplaced. Inside this satchel is a world full of crazy creatures and an amazing stock of top shelf alcohol. It all ties to a falling out he had with a former friend decades ago. Of course this journey has some unintended consequences as Armstrong leaves the satchel open causing a number of monsters to escape including the demon Bacchus who gets much of his power from partying frat boys. So basically true evil incarnate. It is then up to Archer, Armonstrong, and some unlikely allies to stop Bacchus from reeking his havoc.

This is the type of story that reminds you what is special about comics. Even with all the television and movie adaptations that have come out none could quite handle a story of this insane magnitude.  There is a special type of tone you need to nail for this to be more than a funny story about crazy people doing crazy things. Rafer Roberts does that by writing his dialogue in such a way that recognizes the insanity, but at the same time does not lose the ability to build the a final moment of emotional resonance. Those emotional moments never over stay their welcome. Before things get too sappy a well timed piece of levity will occur.

David Lafuente’s art is a key piece to the success of this story so far as well. It is not the type of art that will amaze you panel to panel.  There is a timeless quality to it that will appeal to both longtime fans and new readers. His action sequences are clean and crisp, and he really takes advantage of the world inside the satchel creating some unique creatures and world designs.

Perhaps the biggest question is how welcoming is this series to new readers. If you never read and Archer and Armstrong book before or even anything by Valiant this is actually a great place to start. There are some details that may go over your head. Some hints at character backstories that are not finely worked out here, however enough is given to understand the broad strokes of all the different relationships. Why it will work for new readers though is because it gives you a great understanding of Archer and Armstrong, what drives them, and the type of stories you can expect moving forward. If you are looking for a comic that both feel fresh and familiar this is a great place to start.