What does the DC Comics Revival Logo mean? I like to think a return to simpler and better times. That recent run at DC Comics although had some good stories come of it, was a colossal mess.

This new envisioning of the logo and their going back to basics with the Rebirth this month I hope means we’ll get coherent and interesting stories. Mind you I think we did get interesting stories but some of the concepts were lacking in continuity areas. Also the logo was a bit odd to say the least.

Marvel has one thing going and that is despite all the changes, their primary logo has always stated MARVEL plainly in the logo. 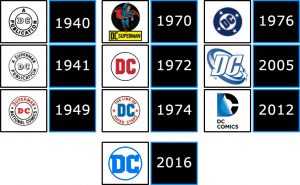 Breaking down the new logo I get a vibe from all of the past logo designs sans the 2012 rendition. It seems to more idealistically resemble the 1972 version with the colors of the 1974. But all the previous DC Comics logos from 1940 to 2005 (overlooking the 1970 have had the DC logo in the circle. 2005 was more of a swoop and 2012 didn’t have it whatsoever.

I know breaking down the logo is almost lame but I like to look at it as a truly thought bearing decision. DC was faltering in comics due to the NEW 52 mess. If they went back to the just telling good stories.

I am going to reference another great article on this subject here in which they explain some of the historical changes.

Geoff Johns, DC Entertainment’s Chief Creative Officer states: “I’m very proud that Rebirth will be the first comic book published with the new DC logo. To me, Rebirth and the new DC logo are built on what’s come before while looking to what will come tomorrow. I can’t wait for people to see it on the cover.”

To which I agree it should build on but not keep trying to reinvent or rehash old stories as New 52 attempted. I feel with the simplistic design it will work better universally as it has for Marvel.

Amit Desai, DC Entertainment Senior Vice President of Marketing and Global Franchise Management states: “While comics continue to be the heart and soul of DC, the brand has evolved to now stand for powerful storytelling across so many different forms of media. DC is home to the greatest Super Heroes and Super-Villains, and the new logo has the character and strength to stand proudly alongside DC’s iconic symbols. The launch of the new logo is the perfect tribute to DC’s legacy, exciting future and most importantly, our fans.”

This I think was the statement to take away from this whole debacle on the logo, it has evolved and this will give more resonance with the legacy of DC.