It is good to read crazy fun Avengers stories again. For some time now the Avengers comic brand has been hurting. A large number of titles in varying degrees of quality had watered down the excitement of reading about Earth’s mightiest heroes. So it is a rather bold move to switch focus by combing all of the ongoing Avengers books into one weekly comic event. Considering the supposed event fatigue and lack of past success this series should be dead on arrival. Instead, it has been reminiscent of what has made Avengers such a Marvel mainstay since the sixties. Keeping up with a weekly series is a burden for the wallet, but at least there is a good return on that investment.

With that said issue number four is unquestionably the weakest thus far. While still an enjoyable read it has done the least to push the story forward as the bulk of the story is made up of these giant set pieces as the Avengers square off against the Lethal Legion and Black Order. Mysterious pyramid shape objects have fallen to Earth and could be the key to how the world was literally stolen. Although finding that answer appears to come at a very drastic cost.

No Surrender’s concept is not one that is rewriting the book on how to tell a massive story of this nature. The world is in danger by a mysterious force and our band of heroes have to fight off a powerful enemy despite the overwhelming odds against them. It’s your standard recipe that has been given a presentation and a well-trained staff that can execute it correctly.  Artist Pepe Larraz deserves a special amount of credit being able to put together such consistent great art throughout this series thus far. Considering the weekly schedule either great planning or an inhuman level of endurance has led him to put out content like this on a weekly basis. 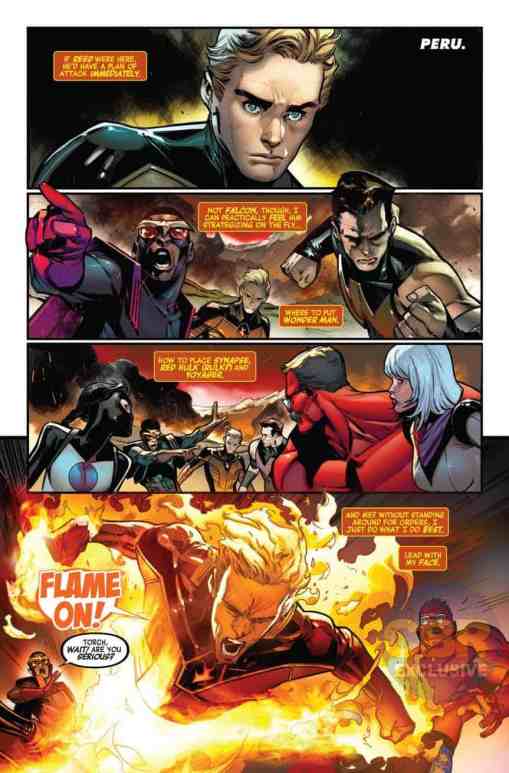 This issue does have a lot of moving pieces. We have multiple Avengers teams fighting multiple groups of evil comic characters in multiple locations all written by multiple writers. How this is not a giant incomprehensible mess is an achievement by itself.  It is an impressive work of editing that it was as fluid as it was. At times it does get somewhat confusing as we jump from Peru and Rome. Landscapes give very little detail to where you are at a current place in time. With all the different characters knowing who is where at each specific moment does have its challenges. Despite the details being messy, the overarching plot is simple and laid out well enough to follow. Especially due to how each issue has made way for some character work to provide personality and purpose to this chaos.

The last issue Quicksilver was a major focus as his rejection against authority led to his apparent demise. We see a similar element with this issue as it is bookended with Johnny Storm’s take on what is happening. How the lack of leadership and experience of his fellow team members is impacting his confidence in this plan. This element of the danger of hubris has been running through this series since its onset. Even a character like Thor is shown to overestimate her strength and ability. Her moment with Metal Master was one of the best of the issue and also worked to make a character with an otherwise amusing name an actual threat. It worked as a major standout moment without calling too much attention to itself.

A big part of why this issue had the fluidity it did were the colors of David Curiel. On a basic aesthetic point of view they looked gorgeous and bright, but more importantly, the palette he used to distinguish specific action beats increased the overall impact of the moment. At times each panel would have its own distinct look causing it to standout within all this chaos. Often there was contrast between these energetic blues and yellows with dark blacks and reds to provide a stunning effect.

Each issue so far has added another piece to this ever-growing puzzle. An enigmatic figure still lurks in the darkness as just small glimpses are shown.  The lack of answers has yet to bog down the narrative into this pointless guessing game. Rather it has just served to add additional intrigue to the rising stakes. Hopefully, future issues will get back to a better balance of action and story, but if this ends up being the weakest installment this could end up being the best Avengers book we have gotten in years.