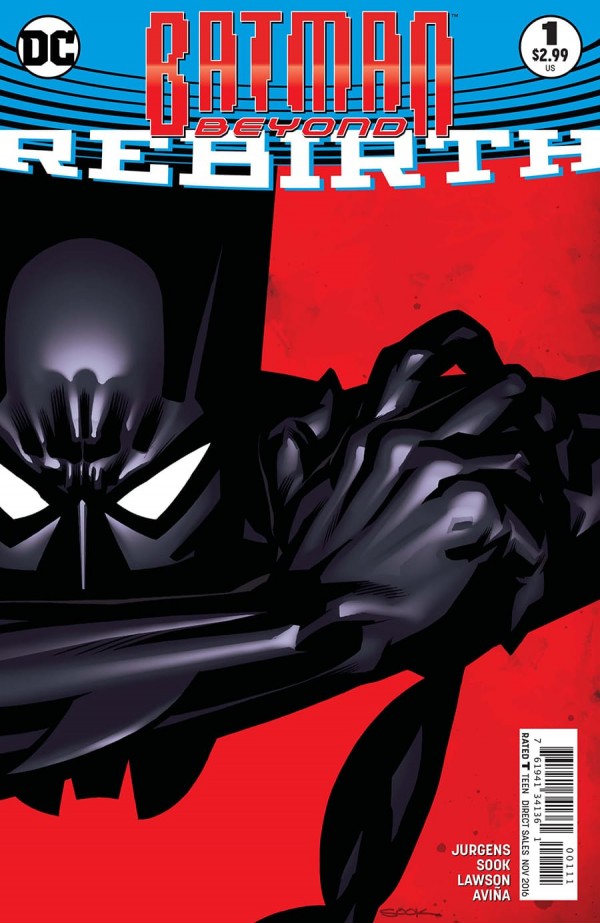 Now that we are a few months into DC’s Rebirth a pattern has emerged when it comes to these Rebirth titles. Some are simply one shot stories to set the tone for whats the come, some are retellings of character;s origins to remind old readers and inform new ones, and some introduce the major plot points the first arc will be focused on. Batman Beyond Rebirth #1 is a combination of all three. Terry Mcginnis is back in the suit and the world of Neo Gotham once again resembles what many people saw in the original animated series. In a way that appears to be the biggest goal of this issue. Setting the world back to what people once knew in hopes of getting fans of the series back on board.

Overall the quality of the comic is relatively standard. Nothing standouts as downright awful, but there is also not much to get all the excited about. Starting off with the Jokers as the main threat makes sense to a certain standpoint, but at the same time I cannot help but feel we have already gone down this road so many times already. Based on some of the major reveals of this issue the big surprise is something the cartoon series previously did to an amazing degree. If this series is going to trend similar ground it will need to step up its game to not seem the like a lesser story.

The issue starts off with Batman taking down a couple of low level Joker goons trying to rob a school bus. Apparently they hope to get into the lucrative lunch money racket we have heard so much about. Flashbacks are woven throughout to show how Terry Mcginnis became Batman. These flashbacks did have a intriguing faded out look that did hearken back to the style of the 90’s. While covering Terry’s origin makes sense, what was surprising was how little was covered regarding what has happened in the series recently. Considering most of the people who pick on this book are fans of the comics it would make sense if less time was spent on what most already knew and more time was spent on why everyone thought Terry was dead. 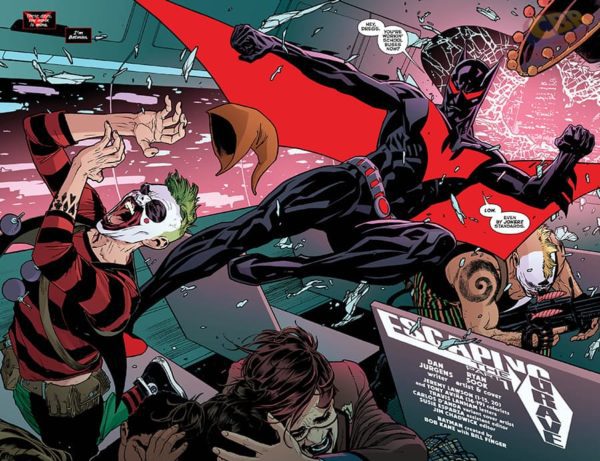 We also find out the Jokers have taken over part of the city that Gotham elite is happy to ignore. There are chosen few who wish to look out for the unfortunate souls caught up in the Jokers crazy games. One of those individuals is Terry’s former girlfriend Dana who ends up getting captured for her troubles.

There are a lot of questions that a brought up that have yet to be answered. Bruce is no longer in Terry’s ear leaving him to roam the streets of Gotham all his lonesome. Clearly why Bruce is gone will be a key plot point moving forward. In addition the biggest surprise is left for the final pages. A familiar foe may be back in the mix leading the Joker gang. So yes enough is sprinkled in to intrigue readers to stick with the series, but if these Rebirth issues are designed to get you excited about what’s to come this is somewhat of a failure.

Part of the reason is Ryan Sook’s art does not standout much at all. The only element that is memorable is his design of the Batsuit. He has given it these extended eyes that look too big for Batman’s head. Unlike Spider-Man’s eyes they  are vertically extended giving them a visor esc quality.

Overall Batman Beyond Rebirth #1 biggest sin is its simply not that memorable. Surely fans of the series may get some joy from seeing this world back to the way they remember. Those lacking that nostalgia will probably loose interest relatively quickly. There have been other DC titles like Supergirl that had disappointing Rebirth issues but bounced back when the series fully launched. My hope is Batman Beyond will do the same.