Welcome to my picks for the Best Comic Covers hitting shops this week. When I look at covers the primary things I am looking for are story, creativity, and ingenuity. Based on those elements these are the covers that stood out to me this week. 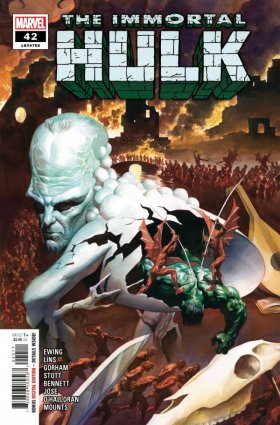 Alex Ross is doing the work of his career with this Immortal Hulk series. His storytelling has never been better, and knowing his impressive career I do not say that lightly. I do not know if this is the best cover he has done for Immortal Hulk but I do know it is the most bonkers one. Some major Paradise Lost vibes from this cover. This is a type of cover that would be right at home hanging amongst Reisnnane paintings. It looks like Hell itself has risen up to take out the force that is the Hulk. We are only two weeks into the year but I would guess this would rank up there as one of the best covers of the year. 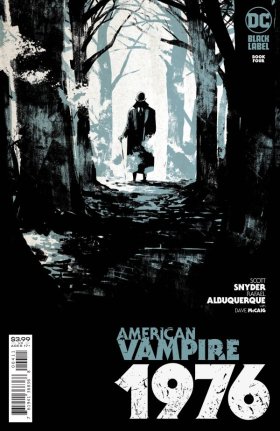 One word to describe this cover? Eerie. Darken woods have this natural creepiness about them and when you add in this mysterious figure to the end of a crooked trail, you have a cover that sends a clear message. Keeping with the wooden theme the colors give it a worn-down feeling. How the white is sporadic as if the world is recovering from a surprise dusting of snow. What is also fun is contrasting this with the variant cover for this issue. That cover is emboldened with 70’s sheen and glamor where this is more classically gothic. 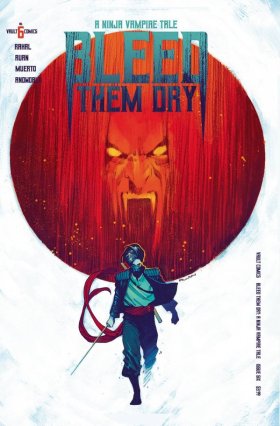 White is not a color you often see so prominently on a cover. Maybe it is the fear of the comic getting ruined with the physical handling of a comic book or maybe the worry it could look too boring. It works because of how it makes the blood-red standout. Like a haunted sun rising in after a deadly massacre, this clearly represents a new day is rising. Then in the foreground, a hero walks on his ever long journey. Despite the minimalist nature of this cover, there is a story here. You do not always need to fill the page with chaos to bring the reader in. Here two main images do that job. 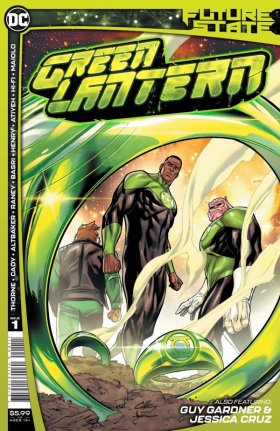 ‘Despite my overall enjoyment for the Future State books I have found their covers to be generally uninspired. I guess when you are doing a lot of new books you cannot do much more than customary character poses to grab people’s attention. That’s why this cover stood out. We have at least some story here. Using the inside of the ring as a framing device is a clever shot. As we see this assortment of rings with empty fingers one assumes something tragic has happened. If you look even closer you’ll see those rings are actually being left behind by the Lanterns in the foreground. Why? What would compel them to do such a thing? That is why storytelling in covers can strengthen the overall experience. Anticipation is built before the book is open. 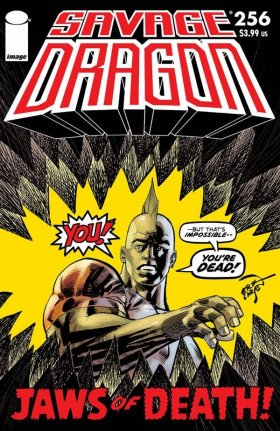 After 255 issues how do you make these covers stand out and remain fresh? Erik Larsen is finding ways. I love how the teeth in this just dominate the page. Makes your imagination run wild regarding what has a month like that with so many endless rows of teeth. Always a fan of when we get some dialog on a cover as well. Something that used to be commonplace but is now a rarity.  Lastly, that yellow backdrop brings out those garish black teeth. They look like mountain peaks that have twisted on themself in some sort of apocalyptic accident. This is a comic veteran doing all the small and big things right to construct a memorable cover. 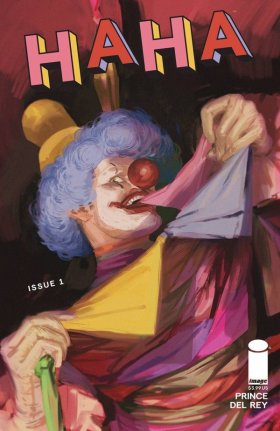 What is it about clowns that makes them so creepy? Sure someone like Pennywise has his evil look and sharp teeth. For the most part, this is just a normal clown doing his job. Despite that, no one in their right mind would be calling this guy to show up at their kid’s birthday party. Unless they don’t really like their kids. Then he has a job. The muted colors are a part of that. When you turn down the brightness what was once childlike turns into something more daring. Love the clay-like texture of this as well. It brings the picture alive in an uncountable way. Also that side-eye? The one that is looking straight at you as if it is breaking the fourth wall. A nice touch of trickery as well. 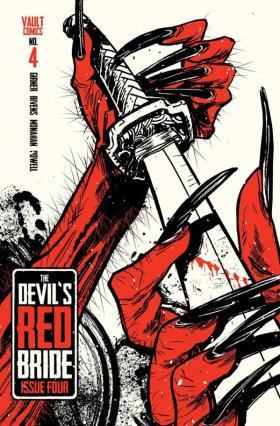 I mentioned with Bleed Them Dry how the use of white allowed the cover to stand out. A similar phenomenon is having with this variant cover of The Devil’s Red Bride. Bloodsoaked red against a white backdrop will always pop off the page. Those hands are utterly creepy. Long jagged black fingernails caressing this sharpened samurai sword is an unnatural site. Their longer length gives them an inhumane like quality. Just giving you a glimpse of the hidden evil that is lurking underneath. Adding the stark black brushstrokes in between those hands brings some chaotic artistry. Here the angle of the camera is way off the norm. Makes you wonder if you are getting a first-hand view of this creature performing the Seppuku ritual. 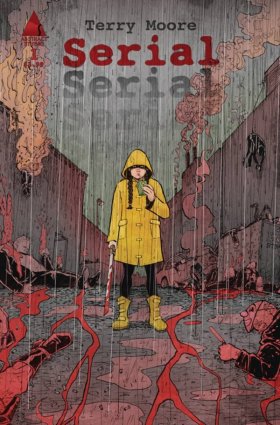 So many qualities come to mind when looking at this cover. Having this youngish girl surrounded by dead bodies casually drinking a juice box is of course humorous. Also makes you realize that Zoe is a major badass. Well, one person’s badass is another person’s sadist to be fair. She is not the type of person to walk away from violence that is for sure. Looking badass in those yellow boats and a rain jacket is no small feat. If you are a Terry Moore fan Zoe is a character you know well, but someone who had never read any of his work can get an exact understanding of her personality. Not surprising that Moore knows exactly what he is doing. 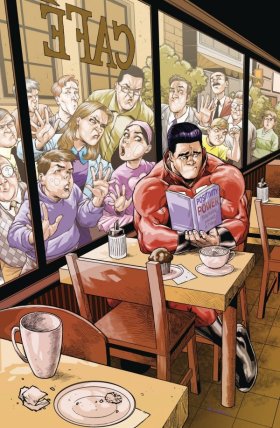 Humor is an underrated quality when it comes to comic book covers. You can engage readers not just by making characters look cool or having an original design. Delivering laughs is another viable way. The hard part is executing it though. Making a still image funny that has no dialog is not easy, which is why I chose this cover in this week’s pick. The facial expressions here are extreme to capture the surrealness of this scene. A hulking superhero reading a self-help book at a table that is clearly too small for him is a compelling story. Having an angry mob surround him with disapproving looks brings major insight into what brought him to that point. So yes there is humor here but also a major dose of sadness. 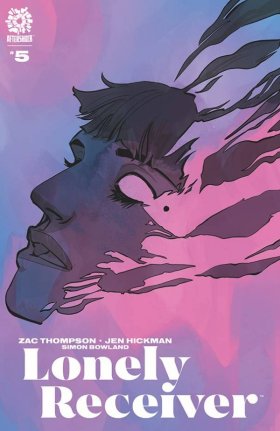 The covers for Lonely Receiver have all been quite something. Each one continuing with this motif of the human face. As this series has been an examination of humanity and connection these covers have helped contextualize those themes. Now as this series concludes we have what looks like someone being physically erased from existence. We have had a lot of covers this week that stood out due to contrasting colors. Here we have the opposite approach. Where the page is saturated with purple hues. Despite not having vast differences in color the general imagery is strong. 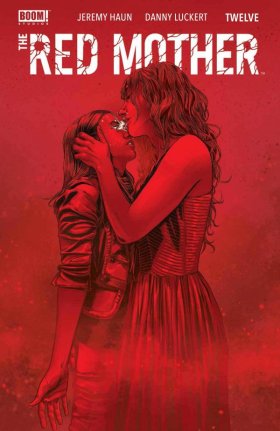 Speaking of being saturated in one primary color, this week’s Red Mother cover goes full force with the use of red. Minus that one small piece of white that almost looks like someone accidentally allowed a touchof white-out to drip on the page. The rendering of the clothing is another small piece at work. The ripples in that jacket make you forget these are not actually people you are seeing. They both have a photorealistic quality to them. That red is a bold choice and matched with their body language you get one haunting image. You can easily mistake their embrace as a loving one. If you overlook the fact she looks like she is trying to eat her eye of course.