Welcome to my choices for the Best Comic Covers coming out this week. When I look at covers I want more than a cool image. I need a story that makes me excited or interested in the story I am about to read.

Based on those parameters these are my choices for this week: 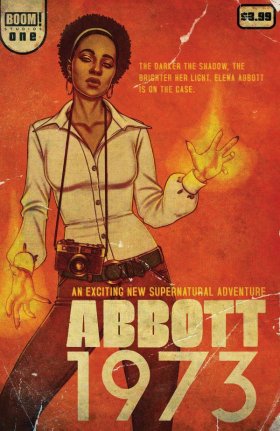 What stands out with this cover is the dedication to making it feel like a classic cover from the 1970s. Starting with the color choice that looks like a palette you would see in an everyday living room of the time. That orange is prominent. You then have the weathered pieces to make it feel organically vintage. For a cover that just has the main character image, there is some story here. Before reading you have an idea of the tone and style of this story. If this cover catches your eye most likely you will enjoy the inside as well. 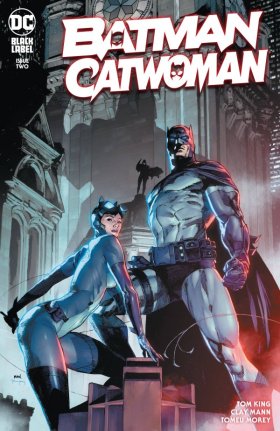 My admiration of the classic Batman the Animated Series cartoon may be why this cover works for me as much as it does. Seeing the Phantasm make her way to the pages of comics is a welcomed sight. Logically this cover may not fully make sense. Why the Phantasm’s shadow is as large as it appears is not clear, but despite the detachment to absolute realism, the effect maintains. Obviously meant to be a more symbolic gesture of this threat that looms in the background for the Bat and Cat. 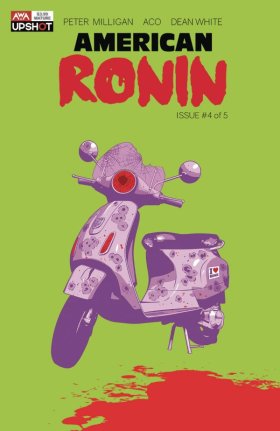 American Ronin is in the echelon of current comic book series that always have noteworthy covers. Partially due to bold color choices that dominate the majority of the cover. That bright green works well to push out the blood-red in the title and pooling in the corner. The first cover showed you can make a man sitting down in a chair look badass, and this week shows Vespa’s can look cool in the right context. Despite a myriad of bullet holes it still stands tall. Based on the pool of blood in the corner my guess is the person riding the Vespa was not so lucky. 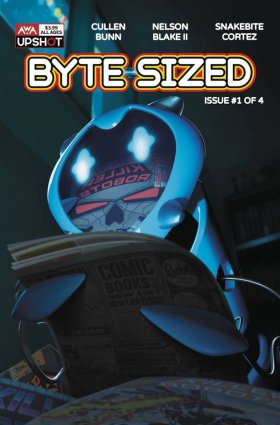 I was a bit confused at first because the cover indicates issue one but this is actually issue two of the series. One would assume that is a typo. Wanted to point that out in case you were confused by the numbering. The cover has a level of photorealism. I am not sure what medium was used to make it but whatever it was gives the cover a very distinct look. Especially that paper which has a weight you would expect to see in a real book. This is a great use of reflection to add an ominous look to this robot’s face. At first, I did not realize it was a reflection until I realized the words were reversed. Makes what could look like a cute robot assistant into a small killing machine. 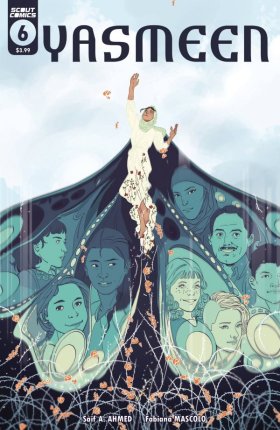 One of my favorite things is when a cover for a series that I do not read catches my eye. That was the case for this issue. This is a gorgeous cover that probably is telling more of a story than I even realize. As an outsider looking on I see a woman who is clearly surrounded by some important people that mean a lot to her. Representing those individuals as literal wrings propelling her skyward is a creative choice. It makes me believe they somehow make up the fabric of who she is or who she wants to be. This cover alone is making me regret not reading this series. Since this issue marks the end of the book I will certainly be picking it up in trade. 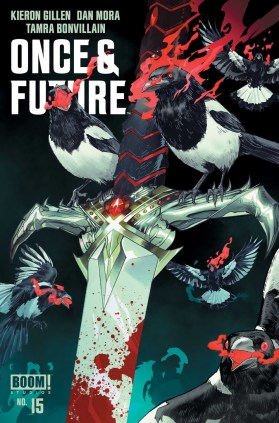 Most of the covers for Once & Future have been very character-based. Here we have a change of direction. Growing up I had this fascination with swords and weapons for some reason. Maybe it was the combination of my love of G.I. Joe and the Teenage Mutant Ninja Turtles. Looking at this cover some of those memories are coming back to me. That looks like one badass looking sword. You could understand why this sword could unite an entire nation of people.  On the flip side, those birds just look straight-up evil. Obviously, they have been enchanted somehow as they are acting as guardians of this majestic weapon. 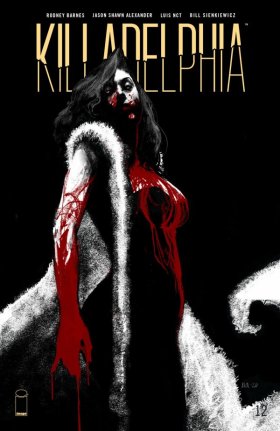 Haunting. The word that comes to mind when looking at this cover. Jason Shawn Alexander is doing the work of his career with this series and that includes the covers. There may not be a massive amount of story here. What it does do is set the atmosphere, and atmosphere has been one of the strengths of this series thus far. Being mostly in black and white that blood shouts to you to announce its presence. It rides the line of being a bit erratic and horrific at the same time. This figure has a level of power and beauty. She is not trying to be scary rather she looks a bit regal as if she is the Queen of the Damned waiting for her admiration. 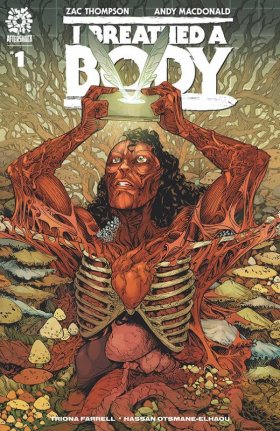 I Breathed A Body #1

Now to a cover that does have a lot of story. When I look at this cover my mind is not fully sure what I am looking at exactly. It appears as if a life is being created before our eyes as organs, bones, skin, and muscles form. The who and why I am not sure about. Clearly, this will be a story about life and creation in some way. Knowing the work of Zac Thompson I can imagine the psychological exploration that is in store. Andy MacDonald creates an image that is leaning towards body horror but it also looks rather dignified. Maybe it is the long flowing hair. He may not have skin but that hair is phenomenal. 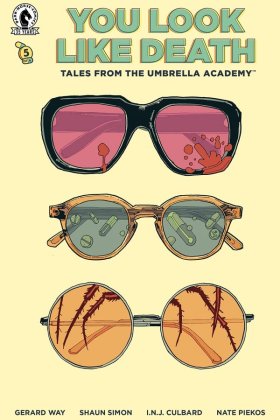 You Look Like Death: Tales From The Umbrella Academy #5

This is another book I am not currently reading, and again this cover has me intrigued to change that. Yes, three pairs of glasses can have that effect. Each seems to be representing its own distinct element. The first shows violence and based on the style and blood perhaps the life of an assassin. Next, we have a look into addiction as drugs fill the lens. Now for the last pair? Giant Ants? Maybe science? Again, I do not have all the answers but I see a number of possibilities. Most importantly it has been interested in reading what is inside this comic. What more can a cover do than that? 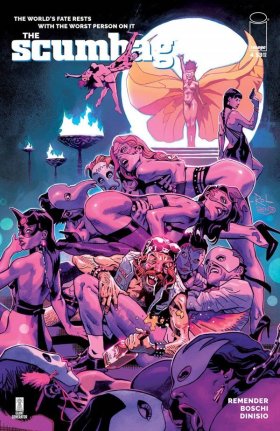 I feel like if I stare at this cover for too long I may contract a venereal disease so I will try to make this quick. The Scumbag is about the worse person in the world becoming a superhero and a scene like this is a result. It looks like you throw Larry the Cable guy into the middle of a Stanley Kubrick movie. At the very least you have to appreciate a cover pushing the boundaries like this. I never understood why you could show tons of violence on a cover and no one blinks an eye, but anything sex related and suddenly we have to think of the children. I guess my dumb joke to start this is part of the problem. To be clear it was more directed towards the Scumbag because based on his lifestyle he unquestionably has had a few bugs. Ultimately if you see this cover and are intrigued this series will work for you. 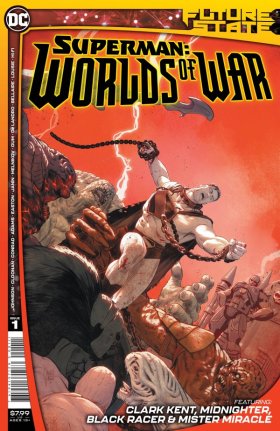 Superman is fighting as a gladiator. My interest has peaked. Yes, I know someone will make a comment about how this idea has been done before. Despite that, it still works for me. Also, I get major John Carter from Mars vibes from this poster. An inspired by those pulpy science fiction stories that take fantasy characters and place them into science fiction concepts. Storywise we can see Superman is not the ‘Man of Tomorrow’. Having no powers he is looking to fight for his life despite the odds against him. Knowing so many different Future State books take place during different times this cover is a welcome sight. Before I open the page I know the status quo. Everything about this Superman story seems to be lining up to be special. Let’s hope it does not disappoint. 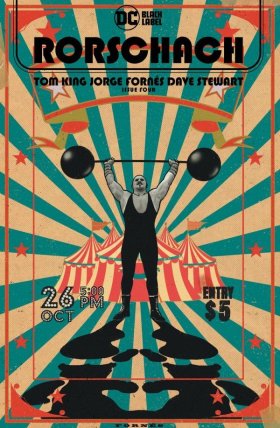 This week Jorge Fornés’s cover for Rorschach #4 was by far my favorite cover to come out this week. There is so much life to this cover. Keeping the Rorschach test motif but adding a circus spin. At a quick glance you may even miss that shadow is doing double duty. Why is there a circus? No idea. I am interested in finding out though. Does it have something to do with the story or did Fornés just think this was a fun idea? I am okay with both. Love the dedication to the theme including a date and time stamp of this muscle man show. This looks like it could exist in the exact world it is depicting.