Welcome to the Best Comic Covers of the Week article. This is where I pick out some of my favorite covers hitting stores this week. These are the covers I feel have the best story or do something truly special outside the norm. With that said let’s get to the choices. 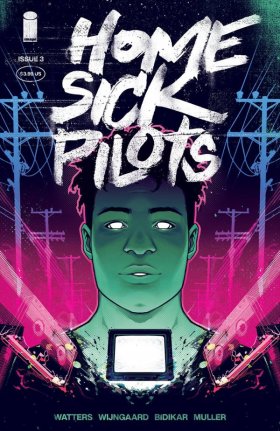 All of the Home Sick Pilots covers have contained this very similar aesthetic. These neon colors with the airbrush title logo mesh nicely together. I like it when you have a book that maintains a similar look with each issue Thinking of a series like Gideon Falls that did it as well as anyone. Then the cover itself has this mashing of random types of technology. Flying cossette tapes, a tube television, and power lines all seem to symbolize this idea of connection. Knowing how this series is trying to rewrite the rules of what you can do with a haunted house tale it makes sense. One would assume those elements shown on the cover will majorly tie into the ongoings of this issue. 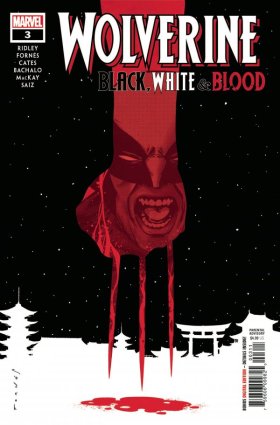 Now to another cover that is all about maintaining a certain aesthetic. However, this time it is regarding coloring. This Wolverine: Black, White & Blood has yielded some great art and that includes the covers. Placing Wolverine inside his own arm is very fitting considering his claws embody his essence. The silhouette backdrop of a classic Feudal Japanese town puts Wolverine in a familiar backdrop as well. Knowing this is a Marvel series I am surprised by how willing they have been to display massive amounts of blood. Here there are not massive amounts of blood but the white background does cause it to stand out a great deal. 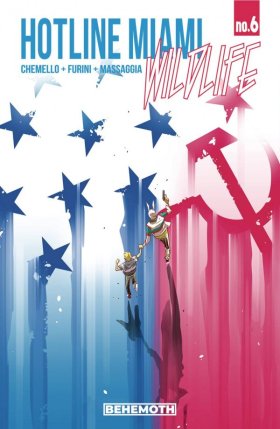 These colors don’t run! Neither do these! Well, I guess they both do. Everyone has their bad day. Hotline Miami: Wildlife is not a series I am currently reading so for its cover to stand out tells me it has to be doing something right. Top-down perspectives are rare when it comes to covers so that right away allows it to stand out. Having these characters run across the iconography of the United States and the Soviet Union gives you a sense of what the stakes are with this story. You have to appreciate a cover that is capable of doing that. I could see this being a movie poster for an 80’s era spy thriller. Where two everyday people get caught between the bad sides of both governments. Knowing this is taking place in Miami I am sure the fashion will be fantastic as well. 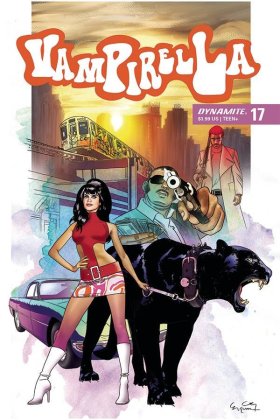 Two weeks in a row I have chosen a Vampirella cover. I guess I am becoming a fan. Despite being centered on the same character they are doing very different things. Here Ergun Gunduz is taking the world of Vampirella and merging it with a 70’s aesthetic. Even the title has been altered to bring the entire look together. This has a bit of a Blaxploitation vibe as well. Oh, and Vampirella has a giant panther. Anyone who can have heels that high and hold an animal of that size deserves a massive amount of respect. Overall this is a cover that succeeds at living up to its concept. It feels just as much a part of what it is homaging as it does the world of Vampirella. There we a lot of covers this week with major cinema influences and this was one of my favorites. 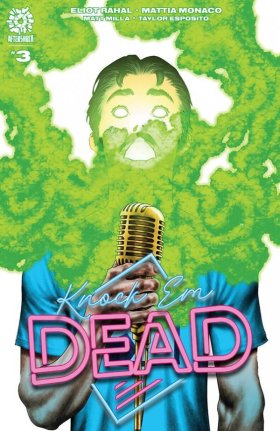 There is a lot that can be taken from this cover. It could be speaking to the toxicity of words that can come from comedians. I love standup comedy but you do have those that do far more harm than good. How people can be transfixed with laughter and not necessarily considering the weight of what is being said. Knowing the supernatural aspect of this series I would assume it is more tied to that than any piece of social commentary. How this man has been possessed by the soul of his dead friend, and how the act of standup is strengthening that control. The bright green smoke does elicit a natural reaction of repulsion. Maybe it is a deep-seated feeling that goes all the way back to those Mr. Yuck stickers. When you saw those you knew that object was poison. In this case, that object is a microphone. 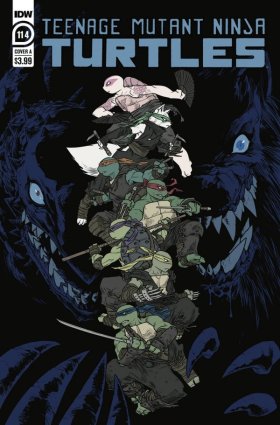 Quietly Teenage Mutant Ninja Turtles has been putting out a lot of great covers as of late. I am typically not a fan of the team cover. I understand their purpose but just seeing a group of characters does not do much for me in most cases. Here Sophie Campbell takes that idea and does something new. Having the characters organized vertically like that is a simple but impactful gesture. We see they are together but perhaps they are not linked as they used to be. In addition, you have those massive creatures in the background. As a person who grew up on the original cartoon show, my reaction is to think of Bebop and Rocksteady as nothing but sad goofs. Seeing them rendered like this changes that thought. They appear to be legit monsters that could destroy the Turtles. 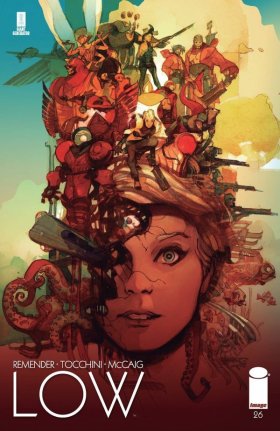 This is set to be the last issue of Low so we get a cover that is pulling out all of the stops. One that is taking pieces from the entire run and placing them into one distinct image. There is a lot to take in with this cover, which makes sense when you are trying to surmise a book that has been around as long as Low. It is crazy to realize this series started seven years ago and now we are seeing the conclusion. Who are these people? What have they done? Who resides in this world? All appear to be questions asked when developing this image. By itself, this cover conveys a lot, but for those that have read the series the meaning behind it is even deeper. 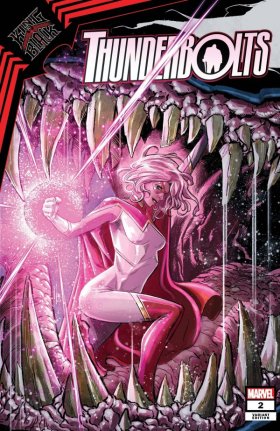 A lot of the King in Black covers have consisted of taking characters and seeing what they would look like if they had a symbiote. It’s yielded some cool results, but I found Marco Checchetto’s cover for King in Black: Thunderbolts #2 far more intriguing. You have much more of a story with a cover like this.  Going into the belly of the beast in a literal way. Having the head of this symbiote dragon not even fit on the page makes its size seem even more massive. Those huge teeth and slimy tongue make you fear for Star’s safety. The rain effects are strong as well, especially how Star’s glowing fist interacts with that rain. I also have to shoutout Kyle Hotz’s main cover as well. Another solid idea where he takes each character and puts them into straight jackets. That is also deserving to make this list. 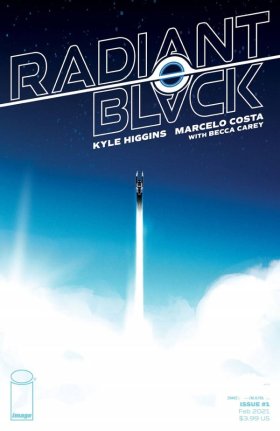 Radiant Black #1 is setting up to be a major release with all the different variant covers. My favorite of the bunch is Eduardo Ferigato’s work here. For one, it is not just a character image. I understand that for the main cover but if you are a variant why not spice things up a little bit? I see so much spirit with this image. The character flying through the air with such force clearly homages one of the world’s greatest and first superheroes. If you listen closely you could hear someone mumble, ‘Up, up, and away!”, or at least something similar. Something about a clear sky and white puffy clouds just puts me at ease as well. It is a type of image that makes the character appear otherworldly and important. Presence just oozes from this. 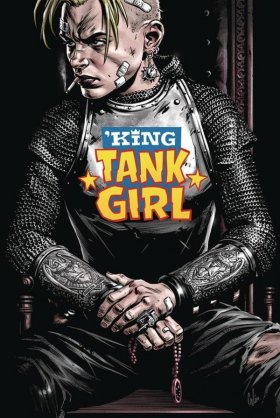 This is a cover I am breaking my rules somewhat. The tone this cover conveys does not necessarily match with the comic you are about to read. At least I would assume so based on the last two issues. Still, I had to include it because the artistry is so strong. So much impressive detail was put into that armor. From the mesh to those symbols on her wrist Chris Wahl put in some work to get this to look this good. There was no cheating here. Then you have Tank Girls face. The bruises, cuts, and scraps all speak of a person who has lived a life. She usually does not have a serious look but it fits the general tone of the image. A small touch I also appreciate is how the comic title operates the way a coat of arms typically would. Somehow it is an equal part of the cover and her chest plate. Every time I look at this cover I find something new that dazzles me. 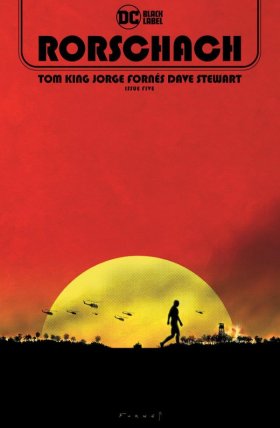 This and King Tank Girl are my two favorite covers that came out this week. Actually even better-the entire year. At first, this cover looks like a man walking during the setting sun. A war wages in the background as he moves on with his travels. Then it all clicks. That man is actually Doctor Manhatten in giant form walking through a worn-torn Vietnam. So far Rorschach has been taking place after the events of the Watchmen comic. So why link back to this infamous moment? Well, this issue involves the Comedian so one would think we are getting some flashbacks. Apocalypse Now is another clear influence on this image. It takes the framing right from the film’s poster. Fitting one of the most notorious Vietnam films would be homaged in a cover like this takes on one of comic’s most notable stories.