Welcome to the Best Comic Covers of the Week article. This is where I pick out some of my favorite covers hitting stores this week. These are the covers I feel have the best story or do something truly special outside the norm. I am also trying to stay away from exclusive covers because seeing something that looks cool that is nearly impossible to get is pretty pointless. With that said let’s get to the choices. 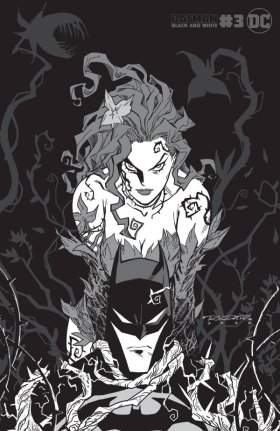 Khary Randolph has been doing fantastic work in the Image series Excellence so I am happy to see he is getting more and more work with the big two. It does not get much bigger than Batman. His sharp style is all over this cover. There is a cartoony feel but with a harder and more distinct edge. A meshing of styles of all different eras and regions of the world. I love the look he gives Poison Ivy. She looks fierce and in control of the moment. Where she can be sinister but for the right reasons, or at least the reasons she thinks are right. Adding the vines in the background gives the cover more life as well. He could have stopped with just the two key figures, but that piece does a lot to make the cover come alive. 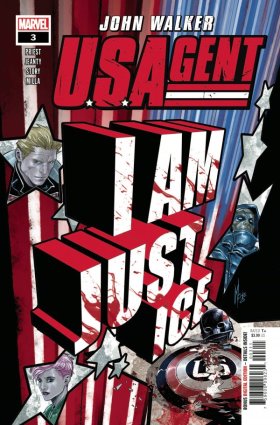 Not often a cover that is so text-heavy makes the best cover list. Great design is just great design. The world play is both fun and information. Part of me wonders if it is a Captain America reference as he is well known for his time on ice. Where U.S. Agent is most famous for not being Captain America. The blood splatter on the words is clearly linked to the more violent tendencies of John Walker. He does have some anger issues, and I do not think it is an accident those words are covering the flag from being splattered. Walker may have his many issues, but he often gets the job done. You could argue the cover may be too busy. There is a lot going on here especially with the star profile pictures as well. It all ties together though and each piece helps compliment the next. 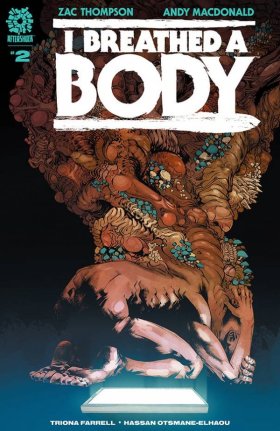 I Breathed A Body #2

If you are going to read a Zac Thompson series you know you will be getting some creative cover designs. It helps when you partner with artists like Andy MacDonald. As someone who has enjoyed MacDonald’s work in the past, he is pushing himself to new heights with this series. Drawing the human form to this degree is not easy. Especially when you are showing nearly every inch of the body in uncommon poses. Do I know what exactly this cover is saying? No, and I do not think a definite message is needed for a cover to be compelling. One that can provoke thought and questions can be far more enjoyable to view. Here it appears we are seeing a body being birthed a new. This sea of organs being morphed into one specific human form. Somehow both beautiful and horrific at the same time. 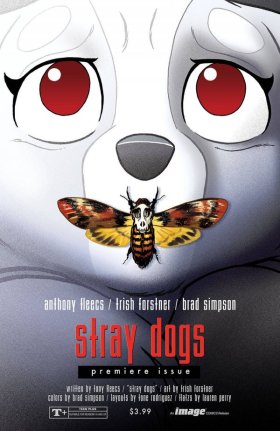 I am a fan of a good movie poster homage cover. DCeased had a slew of them throughout its run. Now Stray Dogs is up to do its part. Credit to Trish Forstner who is not only doing this cover but the main cover and the interiors for the book as well. Rarely do you see that happened. This cover also ties into the tagline of the series that says it is Lady and the Tramp meets Silence of the Lambs. As a fan of the Disney film, I am a little disappointed we did not also get a Lady and the Tramp homage poster but I do realize Disney can be a bit of a pain sometimes with that type of stuff. This cover does not try to overly complicate matters. It takes the classic poster and simply adds a dog to where Jodie Foster used to be. No offense to Foster but adding a dog pretty much improves everything. It is a scientific fact proved by dog scientists. 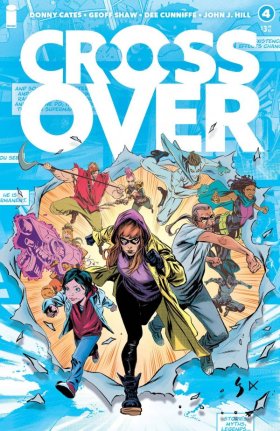 From one homage cover to another, but this time it is a comic cover that is getting the treatment. Geoff Shaw is taking inspiration from one of the most notorious comics of all time Giant-Sized X-Men #1 with this image. Considering Crossover has been a book about comics doing an homage cover furthers that purpose. Instead of the X-Men jumping out of the page we have the characters of Crossover including Madman who first made his appearance last issue. I love that blue color. It is not one you often see on the front of a comic book. Speaking of coloring Shaw keeps the dotted color design of the characters who have come from the comic book world. This is a comic about why people love comics and that cover encapsulates that feeling. I know I tend to focus on the story more than anything but getting to the heart of the series is just as impressive. 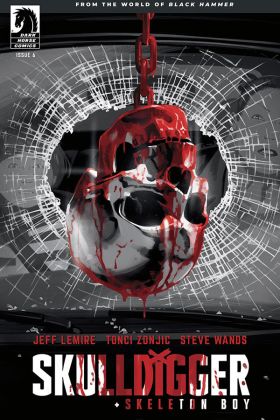 When I was looking at this week’s comics this cover literally jumped out at me. That giant bloody skull can get your attention in a sea of comic book covers. A fantastic touch is how it appears the skull is dripping on the cover logo slowly covering it in bloody red. It makes the cover feel like it is alive and moving despite being a static image. You also see the way Tonci Zonjic contrasts styles with this series. The skull has a more photorealistic look where the people in the car have a more classic comic book design. At first, I did not even notice them. As your gaze expands you see them hiding in the background. The window shows how those two words were separated but now are clashing together in a very violent way. If you dig this cover like I do you will be happy to know the interiors are just as good if not better. 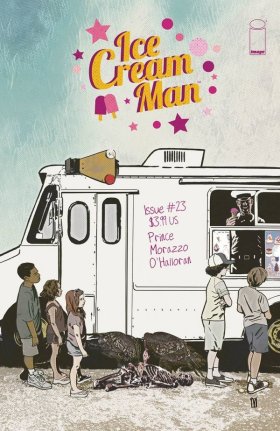 Do you know what I first notice about this cover?  No, it is not the creepy Ice Cream Man that does everything possible to tell you he is a dangerous soul. Those kids should probably not eat that.  No, it is not even the dead kid being eaten by vultures. (You know it has been a weird year when that is something your mind can quickly overlook) It is the way the cover incorporates its credits into the artwork. So naturally are they added you can easily overlook them. Especially if you are a normal person who does not so easily overlook dead bodies. Written on the side of the truck you have the title, name, price, and creators as if they are ice cream specials for the day. Nicely, done. Creativity and storytelling are what I appreciate the most when it comes to cover design, and this clearly has both. You know right away what type of book it is and that there is always that little extra touch to make it more than everything else on the shelf. 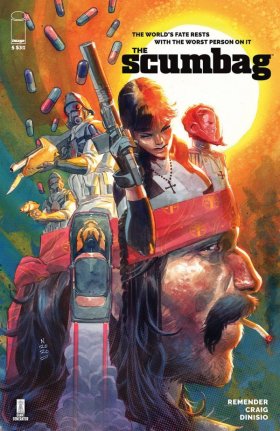 We have had a lot of homage covers this week and that continues with this cover. Now, this is not referring to a specific movie or previous comic. Instead, this is trying to rekindle the classic vibe of 1970s movie posters. It helps when the man character feels like the type of guy who hasn’t mentally left that time. When you talk about story this is packed with it. One that captures the sex, drugs, and secret agent insanity of this series. The design is tightly packed to show the close connection between these elements of the narrative. My favorite piece may be the car driving up the side of his head. Sideburns. Ha, get it? …my apologies. It drives your eye upward to where all the action is taking place. Since this series has a rotating group of artists, we have been able to see a lot of different takes on this character and his world. 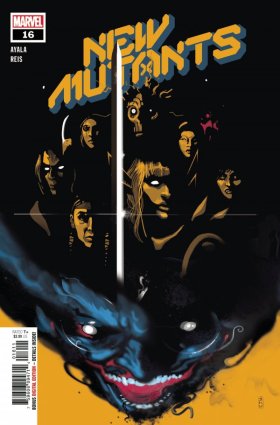 New Mutants has a long history of some amazing comic covers. Mostly those done by legendary comic book artists Bill Sienkiewicz. The Demon Bear cover remains one of my all-time favorite X-Men-related covers. This comic cover feels very inspired by those stories.  Again the homage trend continues. Besides the Sienkiewicz influence, I get some Bohemian Rhapsody vibes from this as well based on the way the faces are placed on the image. This issue is centering on the long-time X-Men villain the Shadow King which opens the door for this type of storytelling. As Shadow King appears to engulf the entire team of the New Mutants one would think he is taking control. Their minds are becoming lost in the chaos he creates. A way to set the stakes of the story before you read the first page. 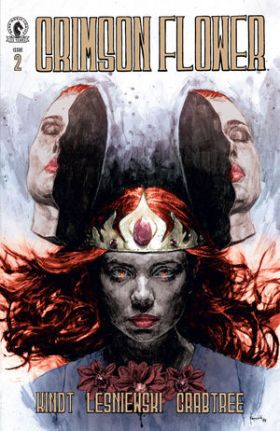 My favorite cover of the week goes to Patric Reynolds and Lee Loughridge’s cover for Crimson Flower #2. If I had one complaint about this cover it would have nothing to do with the image itself. Just that the style of art is so different than the interiors inside, although with variant covers that is to be expected.  Sometimes you see a variant cover and it looks like the person never even read the comic. Not the case with this cover. Two things that stand out to me are the texture of the art and the abstract design. The main character is this woman who has suffered major trauma. This has caused her mind to see things that are not fully real. Her mind combines past folk tales with her real life. A person who will cause her harm appears as a vicious wolf for example. Here we see that concept personified. The real everyday woman has literally split down the middle with the more fantastic side taking over. Earth tones ground the cover and make it appear as if this image was molded in clay. Lastly, you have that crimson red hair that speaks to the power she is building hunting down those that wronged her. An image of power, beauty, with the hint of tragedy.