As we begin a new year my goals is to keep these countdowns going each week. I did a number last year but life got in the way and my focus went to completing My Top 100 Comics of the Year. Now, I’m back in the saddle again ready to pick out my favorite comic covers of the week.

I know a lot of people do this but one thing that is a bit different for me is the way I look at covers. Story and creativity are what drive my choices. Often there are great variant covers that look cool but do little to entice you about the story you are going to read. So some of my choices may be a bit different than others. With that let’s get to the countdown.

Thor is one of my favorite Marvel characters and a big reason for that is Walt Simonson’s run on the character. That man could draw himself a dragon. Looking at this cover I get similar vibes to that era. Thor the viking warrior taking on a mystical beast to save the day yet again. The type of great fantasy you want to see inside the pages of a Thor comic. Olivier Coipel is up there in regards to artists who have shaped the legacy of who Thor is in the Marvel universe. I love seeing him return to the character to construct covers like this. Not showing the entire dragon is a good touch. It keeps his entire scale unknown making him feel like an even bigger threat.

Backtrack is a book I fell off of a while back. I enjoyed the concept well enough, it simply was not clicking with me and got lost in the increasing comic shuffle. This cover does entice me to take a chance with the book once again. Right away anyone can look at this cover and tell there is a time travel element. That’s not something that is easy to display when you don’t have the iconography of a DeLorean or blue police box. The white and yellow clock face plays well against a background of some sharp contrasting colors. Lastly, you have quite an evil-looking smile. His evil glare gives off a Joker level of insanity vibe. Story, character, and a clever design. This checks all the boxes for me in regards to what I like in a cover. 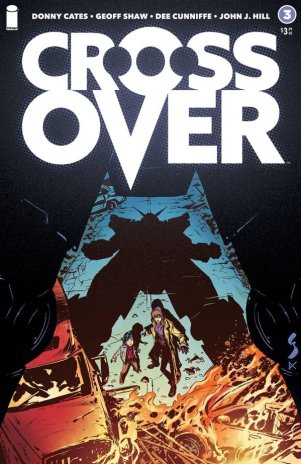 Crossover is focused on the idea of all these different comic entities coming together in one book. Of course, due to legal reasons, you cannot just have major characters show up that you do not own. That’s when you need to rely on tricks like this cover. Using a shadow that hints just enough of who this character might be. Mobile Suit Gundam is not something I have a great deal of experience with, but even a novice like me can catch what this is throwing. It takes more than just a reference for a cover to work. The camera placement here is excellent as it gives a great sense of scale. Having the flaming car in the foreground makes the massive shadow in the background standout even more. 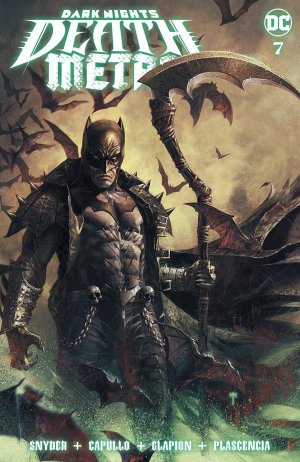 So this is not the type of cover I typically go for. Mainly because there is not much story here. Now the imagery here is incredible. The big reason why I am including it in my picks this week. Batman taking the persona of an agent of death is gothic personified. This looks like a medieval painting designed to haunt the dreams of children. I guess in a way that does fit the persona of The Dark Knight. So yes, the story here is nonexistent. This does not necessarily entice me to read the comic. You could put this cover on just about any issue of this series or Batman for that matter. However, in a week where the number of standout covers is limited decided it was worth including. You cannot deny the badass factor of this cover. 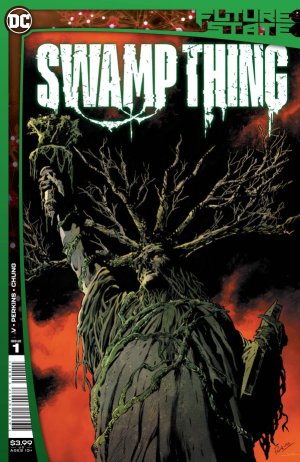 Now we have a cover that does have a bit of a story to it. One downside to these Future State books is that heading design greatly limits how much of the page the artist has to play with. Makes everything seem a bit cramped. It works for Swamp Thing because the focus is on one main image. That of Swamp Thing blended with the iconography of Lady Liberty herself. Considering how Swamp Thing tends to tie into environmental issues I see that cover as an announcement from the creators. This comic will delve even deeper. Perhaps comparing the American idealism and how it impacts nature and the world we rely on for survival. I appreciate covers that are not holding back especially when its a book done by Marvel or DC. 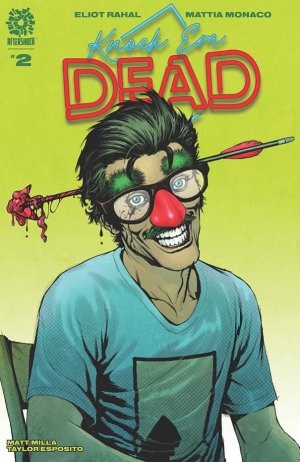 This is a random thought but I cannot think of many comic covers where someone is sitting in a chair. Sitting on a throne? Sure. We see that all the time. A random folding chair? Not so much. Having someone sitting down is not why I picked this cover. What at first, caught my eye were the colors. That lime green background to be specific. It simply is not a color you often see on a comic cover. Also, find it interesting how it slowly fades away down the page. Then when you look at what looks like a crazed man with an arrow stuck in his head my attention is pulled in even more. Having little pieces of brain dripping off the arrowhead defiantly gives it a dark humor feel. This is not Steve Martin on the cover of Let’s Get Small. Something far more twisted is going on. 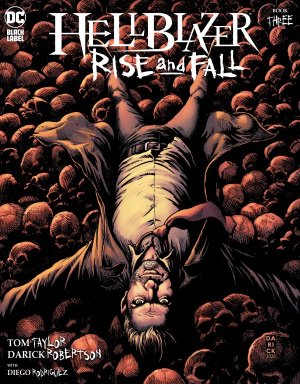 John Constantine looks right at home laying atop of bunch of human skulls. Some may be freaked out to find themselves in this situation. Those on the more evil side may find glee. Constantine is just indifferent about the entire thing. He looks like a man waiting on the bus to arrive. The one thing that is missing is a cigarette dangling from his mouth. Otherwise Darick Roberston captures the character quite well here.  I do wish the colors were not so saturated in brown but it’s a minor complaint for a cover that is otherwise well-executed. Sean Phillips’s variant cover is also quite good as well, but I did not include it as I am trying to limit it to one cover per book. 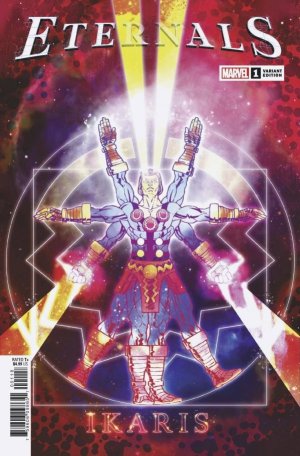 This is another example of a variant cover that does not have a great deal of story. Instead, you have a take on Leonardo da Vinci’s Vitruvian Man. Superlog takes the character of Ikaris and places him into the iconic pose. What this does do is allow us to realize Ikaris is a major character deserving of our attention.  That may not seem like a major accomplishment, but when you have a team book it is important to establish these characters, especially when the movie is nowhere to be seen at the moment. Previous attempts to make the Enternals work did not pan out. I think a large part was due to the inability to get people to invest into this team on a character level. A cover like this is part of the recipe to change that. I also really dig the color choice. Makes it appear like this is all taking place inside an infinite nebula. 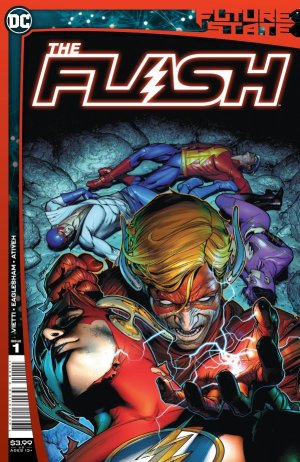 The vast majority of the Future State comic covers are just images of the main character and not much else. As mention with the Swap Thing cover, I do think a lot of that is due to the limited space artists are working with. This issue of Flash does give us a bit more. I know Wally West fans are probably a bit peeved that Wally is once again evil for some reason. Who knows how it will pan out. What this cover does demonstrate is that Wally is not quite Wally at the moment. Something has turned him into something much darker and perhaps more powerful based on the individuals knocked out in the background. That bit of story allowed it to stand out compared to the other Future State comics. Brandon Peterson also draws a creepy looking evil Wally as well. Hopefully, for the sake of all the Wally West fans, things are not exactly as they seem. Let 2021 bit a bit kinder to them. 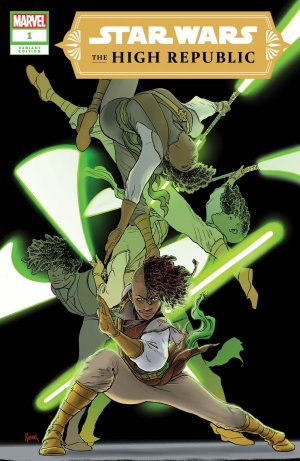 For this new era of Star Wars to work you are going to need characters that stand out. A cover like this is a step in making that happen. Aaron Kuder put together this image of grace with a hint of attitude. The movement is precise and easy to follow. Like a lightsaber ballet design to celebrate the might of the Jedi. Then you have that smirk. A look of confidence meshed with a smile of self-approval. Right away I know this is a Jedi that is both capable and not as stiff as some Jedi tend to be. A cover can tell a story, not just about the narrative you are about to read but also about the people inside that story. It is one thing to make a character look cool, while it is another to make you better understand who they are as a person. 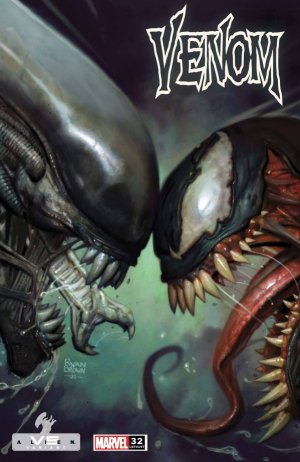 So no this cover does not have much of a story. No, this does not give you a hint of what you are about to read. There is little chance that a xenomorph will be showing up in the pages of Venom. However, I would be lying if this does not hit a childhood sweet spot for me. I grew up loving Alien and Predator along with being a Spider-Man fan. This just looks fun. I hope we get a comic where a showdown like this actually happens. Part of me wonders are these two fighting or are they falling in love? It could be both. Those thongs are awfully close to one another. Let the gross fan fiction begin. They have a lot in common. I think they could make it. Artist Ryan Brown drenches this cover in salvia, It is gross. It is intense. It is everything you want to see with two characters like this going head to head.