With that said let’s get to this week’s choices… 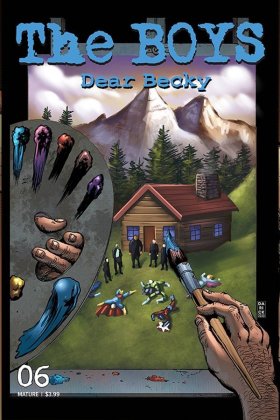 For some reason in my head, those arms belong to a Bob Ross like personality.  He is drawing his happy little trees amongst the nihilistic superhero action. Maybe that mental image is making me appreciate this cover more than I should. I have no reason to think this is an homage to Bob Ross outside the fact that anytime I see a palette like that my mind goes in that direction even without that it is an effective meta concept of an image ontop of an image. Considering The Boys is a reflection of superhero tropes that theme tracks well. 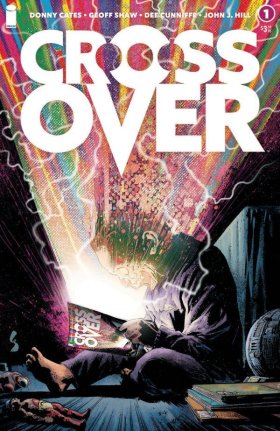 This is a type of cover that is putting a lot of pressure on the content inside. It reminds me of the old Maxell ad from the ’80s where the sound was so good you could literally feel it in the room. Here the impact comes from opening a comic to find a wonderment inside. It is like opening Marsellus Wallace’s briefcase and the Arc of the Covenant at the same time. Love the choice of the rainbow colors as well, and how the character appears to be turning pixelated as if he is being sucked into the comic itself. On a side note that is also a really solid title design as well. 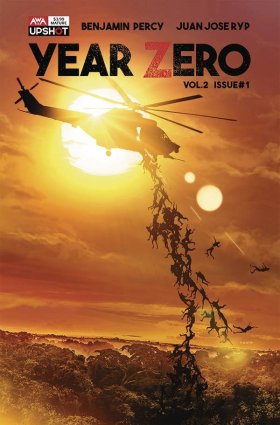 I appreciate the fact this comic is fooling embarrassing that is basically taking the concept of World War Z and placing it in a comic book format. The imagery here is extremely reminiscent of the World War Z film, and if I am being honest much more effective. People will often rail against the lack of originality but originality is deeper than a concept. Hell, all of this is just a natural evolution of the Zombie idea anywhere. You can take something old and create something new as this cover shows. At the very least you have to respect the zombie’s teamwork. Those types of pyramids are quite hard. 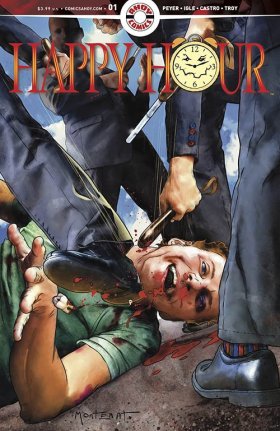 As I have stated in this series of articles before there is not a more important cover than that of the first issue for an indie series. You need to have something on your cover that stands out and entices comic fans to read what is inside. For Happy Hour #1 much of that enticement comes from one gesture. The gesture of a smile adds an entirely new dimension. Why would a man who is being beaten to a bloody pulp smile with such glee? Is he a masochist or just trying to hide his pain? Maybe a little bit of both. Having a tooth flying midair is a nice little touch as well. 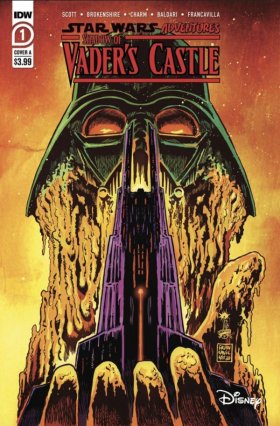 Darth Vader has to be near the top of the greatest villains ever created. Especially when looking at more modern times. With that, it is hard to create imagery that has not already be done. That is what stands out with this cover. It goes beyond the norm of what we see with Darth Vader. Taking his iconic helmet and lair to create this hands of god-like image. People often overlook the Star Wars Adventure books because they are geared more to an all-age market. A cover like this can grab the attention of new readers. Hopefully, people realize these books can appeal to more than just kids. 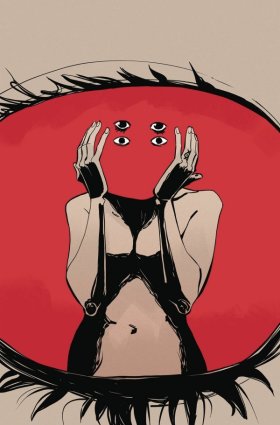 When looking at this cover I get a lot of AEon Flux vibes from it. I remember watching those cartoons late at night on MTV. They would utilize eye imagery a great deal. Luckily, there is no fly in this shot. If I am being fully honest I am not exactly sure what this cover is trying to say. My guess is more will be clear when reading the actual issue. Much of this series has been focused on isolation and the connection between people. Considering they say, “Eyes are the window to the human soul”, perhaps that thought is being incorporated into this image. 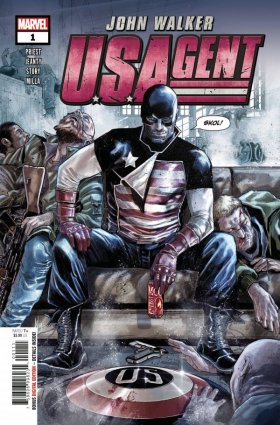 U.S. Agent is basically a low rent Captain America and this cover embodies that. He is also a bit of a prick. So how do you entice readers to check out a book about a level C character that no one likes? You get a cover like this. One that humanizes him a bit. Drinking a beer on a busted up couch surrounded by concussed goons. Apparently, he is doing his own tailoring because even a novice Cosplayer could put together something more official than that getup. I love the design as a comic image. Simply it is not the most official-looking uniform. When you put this all together you have a cover that standouts compared to all the other superhero books. 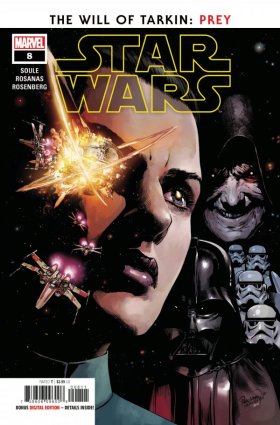 I have not had a Star Wars book in this series yet but this week I have two. Go figure. I have gone back and forth with this choice because at times I really like it. Then I look at it again and it seems a bit off. The use of the Death Star Explosion within the eye of Leia is a key part of tying this cover together. Why I think it works is due to the stern look on her face. We quickly forget she saw her entire homeworld destroyed by that station. No doubt her part in its destruction was something she would cherish. Knowing this takes place as a second Death Star is being built it taps into that renewed determination. One where she displays no fear despite the evil forces she is facing. 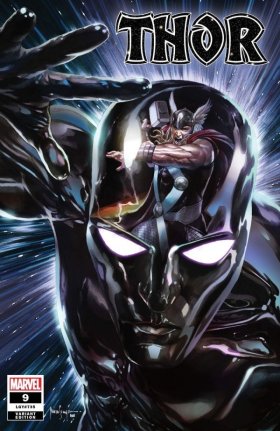 Thor and Silver Surfer go together like Peanut Butter and Jelly. Despite both being heroes for the majority of their creation they tend to face off a lot on the cover of comics. People do love seeing two heavyweights going toe to toe. Silver Surfer #4 no doubt played a big part in that trend. Here we have another example with a slight twist as this is Silver Surfer Black as Donny Cates’s cosmic vision starts to come together. That element gives this cover more of a story than your typical reflection cover. Also knowing King in Black is nearing a story that started way back when Cates was on Thanos is finally being realized. 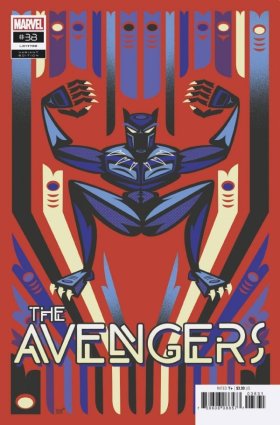 For the last two months, Marvel has been honoring its characters with a massive number of Alex Ross Timeless variants. I did not include those covers because you pretty much knew what you were getting with them. They were great to look at. (I bought them all) But there was not much to talk about. Now Marvel has shifted gears with covers designed to honor Indigenous History. Artist Jeffrey Veregge has constructed a number of covers like this Avengers #38 cover that celebrates Native American culture. The Thor one for this week is solid as well, but I choose this one because here you have two unique cultures coming together. I am all for Marvel expanding their styles to make important statements like this. Including more diverse voices and creators is always a good thing. 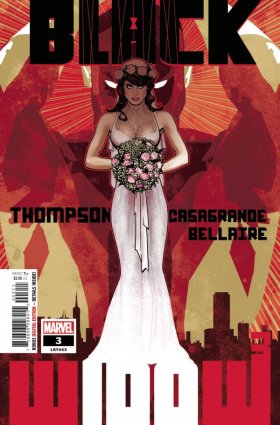 This has everything I look for in a cover. There’s a great design, plenty of story, and is unique to this specific series. Highlighting the “I Do” in Black Widow is a bit of ingenious design. It seamlessly flows the entire design together. By no means am I a style expert but that dress is pretty impeccable. Love how the white melds within that vary ‘I do’. Having what appears to be Red Guardian in the back adds in a sort of ominous atmosphere. Almost like this is some sort of propaganda poster to keep Black Widow’s mind astray.  In the six weeks I have done this list this may be my favorite cover.