Each week brings new comics and with that panels that stand above the rest. With this article I will be pointing out some of my favorite panels because of how well they are crafted, written, or sometimes just because they made me laugh.

Knowing not everyone reads every book I will also try to avoid major spoilers as much as possible. Still if you are the type of person who wants to know absolutely nothing about your books before you read them you may be mildly spoiled ahead. 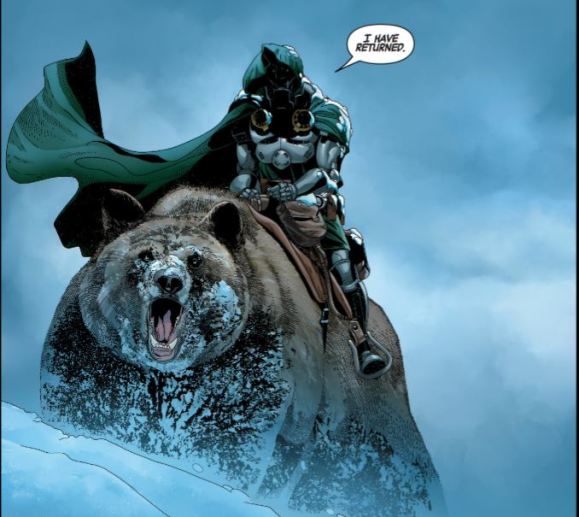 You cannot get more badass than Doctor Doom riding a bear in the middle of a blizzard. Yes, the bear does look extremely photo-referenced but considering the final product I would argue it was worth it. Referencing an animal to that degree is a little more forgiving than when characters’ faces look like tracings of actors’ faces. 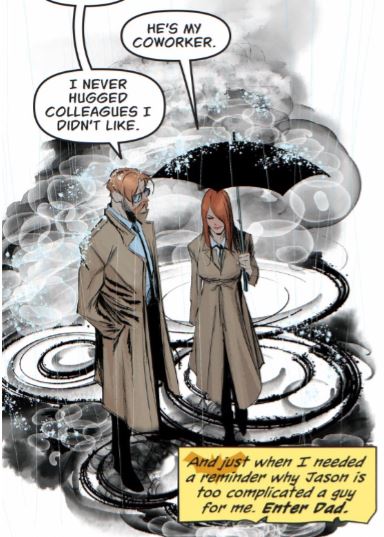 Sometimes the best time to read a comic is when it is being cancelled. No one is really looking so creators may try things that they might not otherwise. With Batgirl I have been majority impressed by some of the art choices they have made. This panel in particular stood out as they took the typical standing in the rain arguing scene and did something different. As if the rain interacting with the page itself causing the ink to puddle and reform the page. Also have to call out the colors here because Jordie Bellare demonstrates why she is one of the best in the business. The intricacies in how she uses negative space give this scene a poetic sense of beauty. 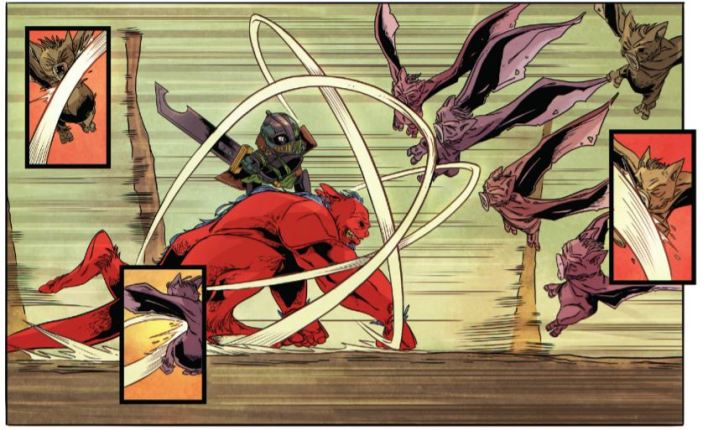 What separates comics that work from comics that don’t often comes down to how well they capture motion. A book can be as dynamic a possible but if it is hard to understand and follow all the effort will be for not. This panel in Canto II #2 stood out to me because of how it does both the big and small things well. It is one major beat but captures a multitude of moments in a very straightforward manner. The main image sets the overall moment while the snippet panels present the impact of the movement. All of this gives it a lot of energy and excitement.

Yes, this is a panel from this month’s edition of Savage Dragon as it was dedicated to saluting the infamous Funny Pages. I love how they went all-in with this including things like coloring techniques. Of all the jokes within this issue, this one stood out to me the most. Erik Larsen has never been one to be shy about making a point. That sentiment remains true with this panel.

Juan Ferreyra is one of my favorite current artists and there were so many panels in this week’s edition of Spider-Man: Noir I could have chosen. I would advise you to pick up this series just to see how well this man can layout a page. What stood out to me in this moment is how Spider-Man in the first panel naturally tracks your eye to the second panel as the perspective majority shifts. It made what could have been a jarring a very fluid sequence. 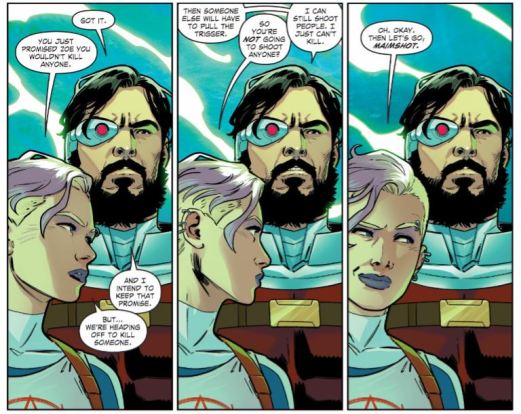 While the majority of her panels so far have made the list due to the success of the art I also wanted to include some that stood out due to the writing. The joke here is obvious but it is also a clever way to inform the change of character Deadshot is undertaking. Having Deadshot make a vow to not kill could easily be this extremely melodramatic moment. Instead, we got a quippy back and forth that lets the reader know he is serious and that the irony is not lost on the creative team. 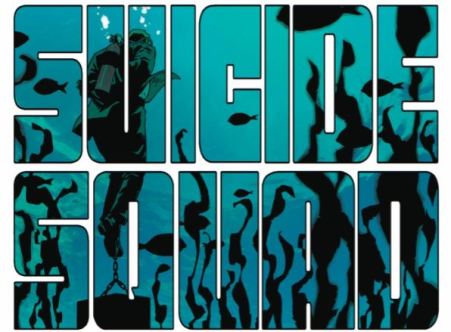 I do not have much to say about this outside I thought this looked really cool and I am all for more comics incorporating movie esc titles cards in their pages. 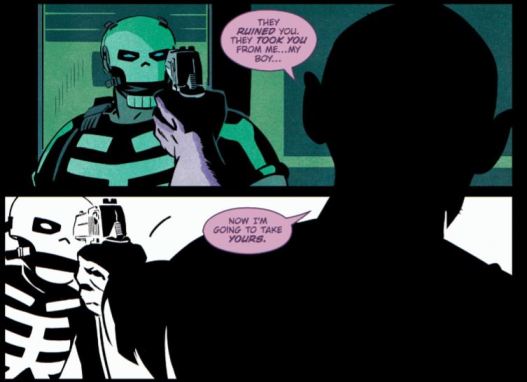 Skulldigger and Skeleton Boy had some of my favorite artistic moments this week and this stood out as one of the best moments. People have characters break the frame all the time but there is often no real rhyme or reason outside it looks cool. By having this imposing figure engulf the page increases his presence and that small motion line makes all the difference. Taking a high tension moment an amping it up even further.

Wolverine checking She-Hulk’s Superhero privilege was an unexpected and impactful moment for this past week’s comics. 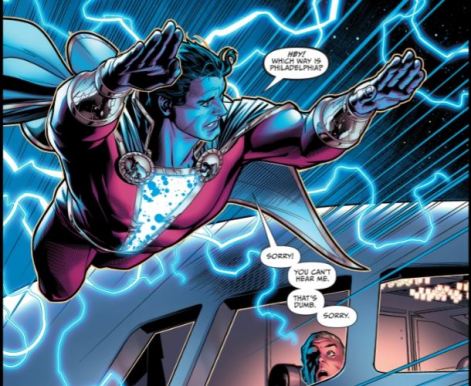 Something we take for granted? Superheroes sense of direction. Love this joke as it makes sense a teenage hero is not exactly sure how to find his way while flying. Hell, I can barely find my way home when I have a GPS to guide me. Could not imagine the challenge of following road signs miles above the ground.

Someone needs to check on Howard Porter with how many characters he has had to draw in these last few issues. The Flash family having a cookout is such a wholesome way to end Joshua Williamson’s epic run. He along with all these characters deserve to have a nice hardy meal after everything that has been accomplished.

Well, those are my picks. What are some of your favorite panels for this past week?

Transformers Anniversaries are More Than Meets The Eye