Welcome to the Best Comic Panels of the week. This is where I go pick out some of my favorite panels from this past week’s comics. Not as many standout moments this week compared to the last few. As a reminder I do try to avoid major spoilers however to be on the safe side the following books will be covered:

Steve Pugh has shown he has a knack for executing comedic moments. Just look at his work with Mark Russell on books like The Flintstones and Billionaire Island. Knowing he was on Wonder Woman this week I was hoping we get some moments of his trademark style. Wonder Woman using a giant shark to eat robots during her beach vacation is right up his ally. Wonder Woman twirling a robot as a shark chomps away is the right pinch of humor for a general superhero story.

This is ludicrous and I am here for it. You could look at Clayface turning into a woodchipper to chomp away at Swamp Thing and come up with a myriad of ways it logically should not work. Those that do that are what I like to call, ‘no fun comic book readers’. Let comic books be comics books every once and a while. This is not only a funny moment but also quite clever. Makes you want to see Clayface vs Swamp Thing mini. That was not something I knew I wanted until now. 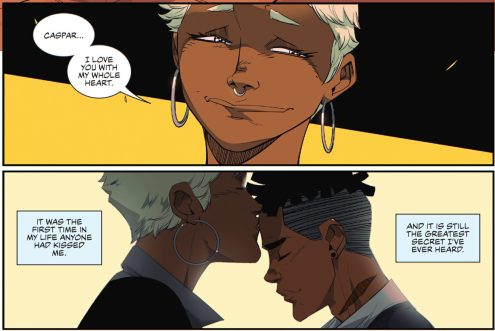 Seven Secrets desperately needed a moment like this. I still question the morality of these characters in general, however, this at least showed people expressing emotion in a way that makes you care about them. Being straightforward and to the point makes it more genuine. No long soliloquy about past mistakes and feelings of regret. Just seven words followed by a gesture of love. That last line also hits quite hard. There has been all this focus on these secrets that protect the world. What I hope this is leading to is a story where the personal stakes are just as vital. 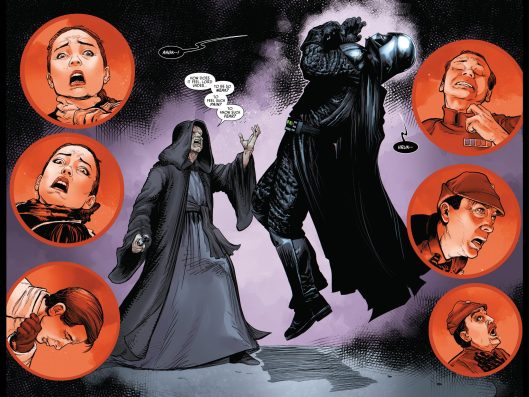 Talk about getting a taste of your own medicine. It is not often you see Darth Vader in a helpless state quite like this. They say as you near death your life flashes before your eyes. I guess for Vader his life was filled with choking people to death. In seriousness, this issue of Vader does a lot to further develop who Vader becomes in Return of the Jedi. To explain why he would hold even further ill will towards his master, but be afraid to do anything about it. You could argue this sequence is a bit on the nose. I would not fully disagree. Being on the nose is not new for the franchise. I mean, they are called Stormtroopers after all. Not hard to see where the allegory is coming from. Plus it is generally well-executed. The art in those bubbles is quite strong. How it can look like each character enough without feeling heavily photo referenced, which is problem that tends to plague other Star Wars comics. 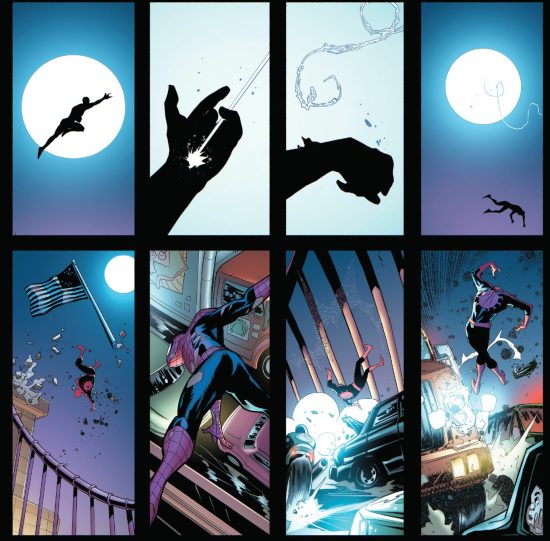 This issue marked Patrick Gleason’s start with Spider-Man and he is coming out strong. I loved the work he did with DC, especially Superman, so I am looking forward to what he can do with the Marvel universe. I could have easily included the entire page because this sequence was fantastic. I love the small quick panels that give this a sense of speed and impact. It starts off as this majestic shot. Spider-Man’s silhouette laid against the full moon. He gracefully swings across the city like only he can. Only for him to lose control and crash below causing major havoc. That Parker luck strikes again.

Last week’s edition of the best panels had a lot of punching. This week not so much. Hey, it is comics so you are almost always guaranteed one good punch a week. Death, taxes, punches in comics. Flash #763 gave us one this week as the Trickster was up to his old tricks again including the always reliable flying fist. Overall the design of this panel is rather straightforward. Solid perspective, ideal character placement, and sound effects give us this fun little moment. Sometimes all you need to do is execute a common recipe to make a good meal. 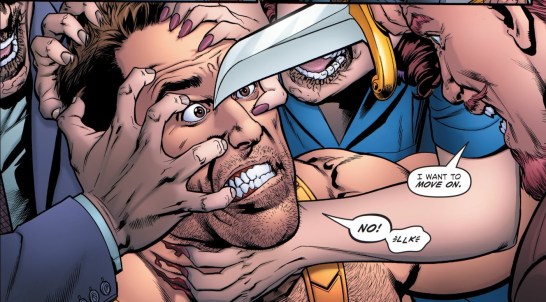 Everyone has those things that will send shivers down their spine. For me, it is anything to do with the eyes. The groin of the face as some might say. As I write this I cannot look directly at this panel in fear of getting woozy. Looking at the face of Hawkman he might feel the same way. Camera placement is what makes this work. Everything is centered in a way so that your eye is directed right to the end of that knife. To capture that claustrophobic atmosphere in this panel there is not an empty space. There is no place to escape as we await the inevitable. 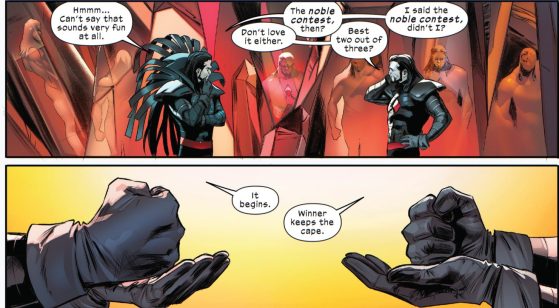 Making Mister Sinister the comic relief is not something I ever thought would work. He has always been this ultra-serious character with not an ounce of levity. Clearly, I am wrong as he has become one of the best characters in this X-Men relaunch. For maybe the first time he has a personality outside of just being evil.  X of Swords was in desperate need of moments like this. A reminder that comics can be fun. Plus who does not like an old fashion game of Rock, Paper, Scissors? 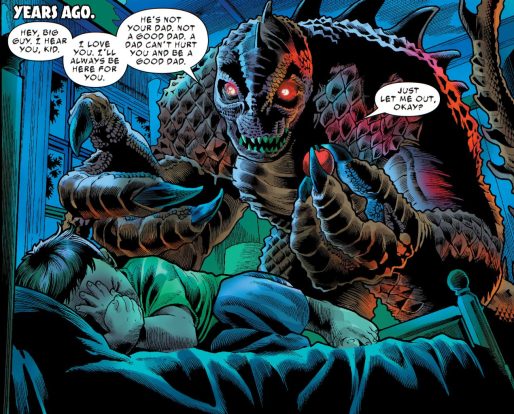 Some more nightmare fuel. Who is the monster behind the monster? We are now getting that answer. Joe Bennett has been doing career work with this series as this panel demonstrates that. His ability to create these monstrous designs that stretch this horror motif in new and exciting waves. How this creature engulfs the room as if he is feeding off the anger and fear of young Bruce. The way he holds the apple is unnerving. As if it is attempting to mimic a gesture it does not fully comprehend. 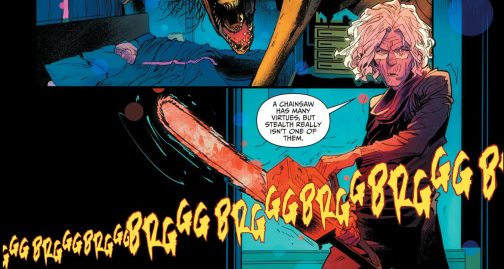 Comics can be this medium that approaches complex emotions and universal truths. Where words and art combine in ways that make you rethink the way you look at the world. Other times you have a seasoned woman grabbing a chainsaw to kill some monsters. This panel is the latter. Kieron Gillen even uses it as an opportunity to get in a sly RPG reference. The colors here are fantastic. Aqua blue played against the orange chainsaw pops off the page. Gradually increasing the font size of the chainsaw gets the nose to ring inside of your head. 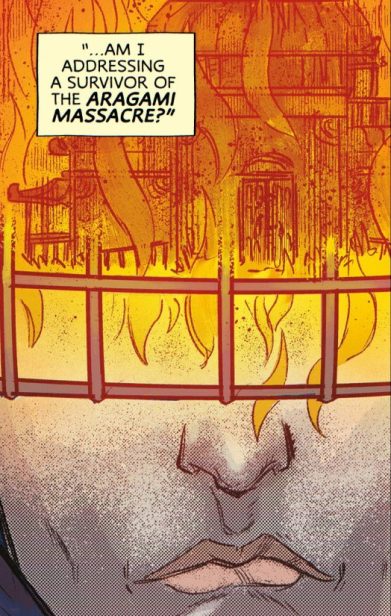 This is a type of imagery that can only really work in a comic. Trying to reconstruct this same concept in a film would not work nearly as well. Taking the headgear of a samurai and transforming to represent a tortured past. I started doing this series because of panels like this. How one still image can tell an entire story within itself. 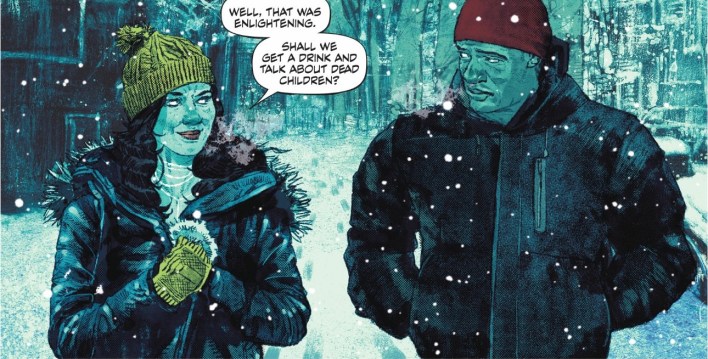 You have dark humor and then you have a moment like this. Taken out of context itis even more disturbing. Making a joke about dead children is a bit dark even for Tom King’s dialog. Limiting this line as just a  joke would be doing it a massive disservice. Alanna was being coy this entire issue as she is doing what she believes she needs to in order to protect her family. Mr. Terrific and her have this mental chess match going on and this line plays into that. Drastically shifting the focus of the conversation to measure the reaction. You are never really sure where their sincerity ends and cynicism begins.

Don't Blink Or You'll Miss All The Geeky Things