Let’s Get Ready to Ruuummmmbble on this edition of the Best Comic Panels of the Week. This is the article where I try to pick out some of the best panels from the comics released this week.  Feels like this week’s comics were booked by WWE’s own Vince McMahon the way some big hog mollies facing off. A fun week of comics to say the least. 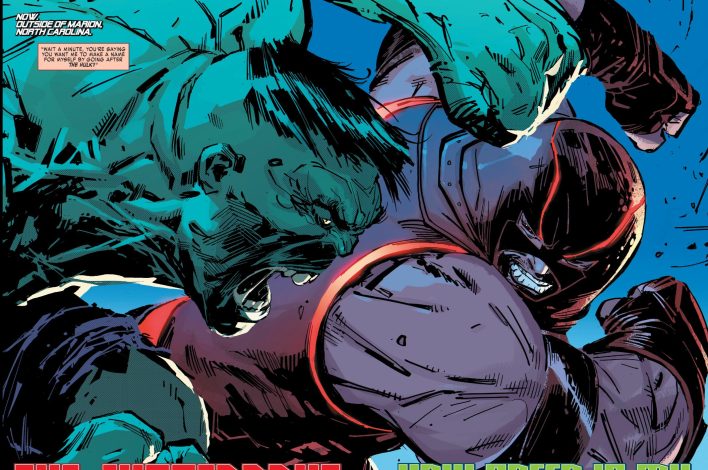 There is something about two of the biggest and badest characters in Marvel throwing punches that gets the comic nerd inside of me excited. Hulk is akin to what Andre the Giant was back in the day. Everyone recognized he was the top of the mountain so you did not need to beat him to show you belong. Simply surviving was enough. You really get a real sense of size with this panel. How they both so big you can not fit them within one page. By giving them these bulky proportions they have a heft to them to make you realize these are living giants. 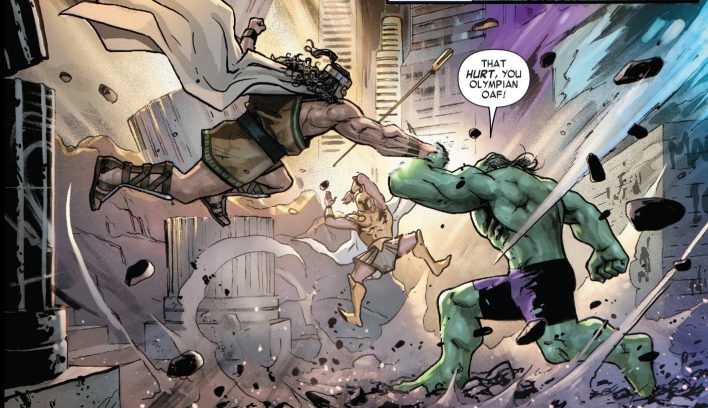 After that Juggernaut and Hulk panel, Hercules and Hulk look like lightweights. This panel was not necessarily about demonstrating size. What works here is the impact. It is not those two massive fits hitting that does it, rather what is occurring in the background. Despite these two figures being unmoved everything around them erupts in chaos. There is even a hint of an anime influence with the use of motion lines to the rising rubble surrounding the characters. Despite the character rendering not being strong the concept is well-executed enough to get the point across. 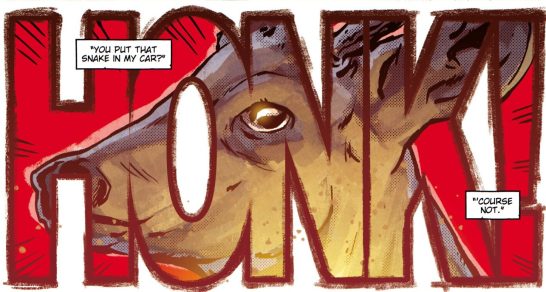 Let’s take a break from fighting to take a look at some of this week’s best uses of sound effects. First with Devil’s Highway this panel showing a road mishap evolving a pesky deer that just could not get out of the way. As someone who grew up in rural PA I probably related more to this panel than any other this week. They certainly got the look of the deer exactly right. That dead-eyed stared as if the deer is unaware of the carnage that awaits. This also tells a very succinct story. Without reading anything else you know exactly what happened. Plus it adds creativity it what otherwise would be a mundane beat. 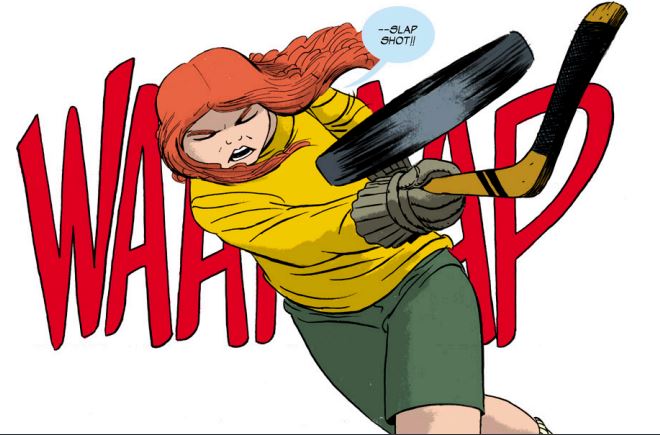 Marcus Martin is one of today’s best artists when it comes to utilizing sound effects within his art. Whether it is creating them himself or knowing to leave enough space to add the much-needed punctuation mark. I tend to dislike the phrase,” Do more with less”, because it is most often reserved for bosses who are making your life twenty times more difficult yet expecting the same result. Comics is one place where it is an apt description. ou do not need a big song and dance to make something seem important. Within the context of the comic, this is a big moment in the story. Through the use of that sound effect and the choice of perspective, he emphasizes the use of force. In addition, the lettering changes to blue dialog balloons to demonstrate the change in emotion. 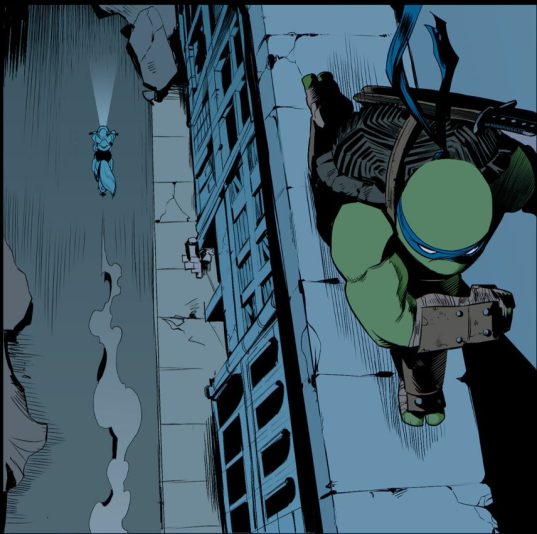 Similar to the previous panel this shot works because of the choice of perspective. A top-down view is not very common so that alone sets it apart. You have to have faith in your skill as an artist that you can utilize the depth needed to make this work while maintaining enough detail to get the point across. The best panels are those that work both on a concept and story level like this. How this demonstrates the different journeys the Turtles have found themselves on and how close yet far away they are to one another.

I have a new rule that if a panel makes me laugh out loud I am going to do everything possible to include it–as long as it does not spoil anything major. Taking this panel out of context does hinder its comedic a bit. Part of the impact can from a well-timed page turn. Still, a man running away from what he thinks is a phantom dog as he accidentally burns down that house is a joy to witness. Body language is enough to elicit a chuckle or two. 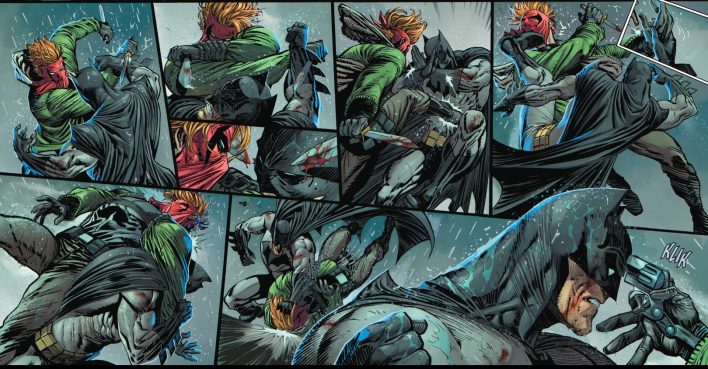 Let’s get back to some more fisticuffs. Comparing this sequence to the Hulk battles demonstrates just how different action can be inside superhero stories. Here the intensity is not through pure strength but technique and fluidity. Someone getting the drop on Batman in a hand to hand fight is rare so the outcome was a nice surprise. Why Grifter is suddenly making an appearance again I am not sure but at least he is one of the few superheroes who comes Covid prepared. 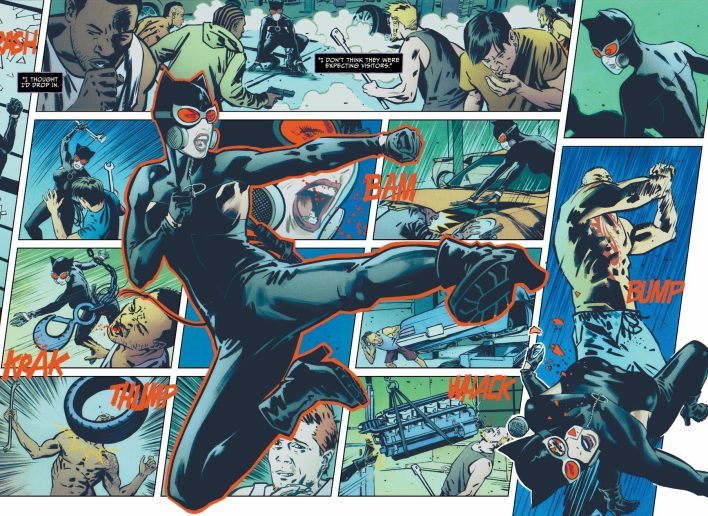 We had a lot of one on one fights so far so why shift focus to a group affair. I love how well-paced this sequence is from moment to moment. Unlike the Batman scene above it is not going directly from punch to punch. Instead of picking out the key beats to the final punch. Placing Catwoman at the forefront to emphasize she was in the middle of this ruckus. Solid use of colors as well as green and blue hues to differentiate each sequence.

Captain America is my favorite superhero so I am also on the lookout for a good shield through. Many artists have tried and many come away doing nothing majorly noteworthy. This was a brief aside in the biggest sequence in the issue. By stepping the camera back you get the entire picture. There is no issue whatsoever following the action here. This is not a knockout punch that you would see in highlight reels. It is that jab that sets up that knockout that comes later. Easy to miss but just as important.

I wish I started doing this series a lot earlier because Gideon Falls has had so many panels that deserved to be highlighted. For those unfamiliar with Gideon Falls the entire book does not look like this. In fact, the use of silhouette is not a tool Andrea Sorrentino goes to very often, which is a big reason why this stood out. By shifting to this design it takes what could have been grotesque and make it graceful. 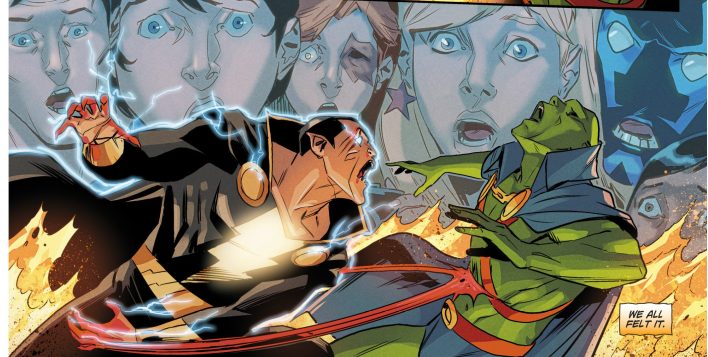 I debated on including this panel because this is kind of a big spoiler. Considering this is a prequel series though this is not necessarily telling us anything readers did not already know. Moreso just filling in the blanks. Rarely are blanks so compelling. The Martian Manhunter is one of those heroes that pretty much everyone has a level of respect for so to see him go out like this is a gut punch. Knowing everyone who was linked to him felt his pain as well just pushes that punch deeper. 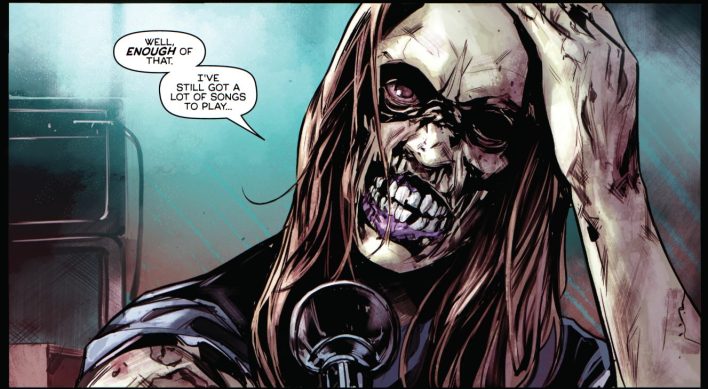 It is 2020 and creators are still finding ways to tell zombie stories. Although Dead Day is something more than a zombie story as people come back to life for one day and are fully cognitive. They are not out to eat brains. Some just want to rock. I like how this panel opens up that idea. Had me thinking of all the different musical artists that passed away coming back to life for one more concert. Imagine a zombie Prince concert? That would be a sight to see.

How do you display heroism? Well, why not start by showing a man is willing to fly straight into a fortified structure in hopes of saving some hostages. To add injury to injury you have a listing of the possible damages that await Tony Stark if he tries to pull this off. Other panels this week have displayed power. Here it is all about speed. 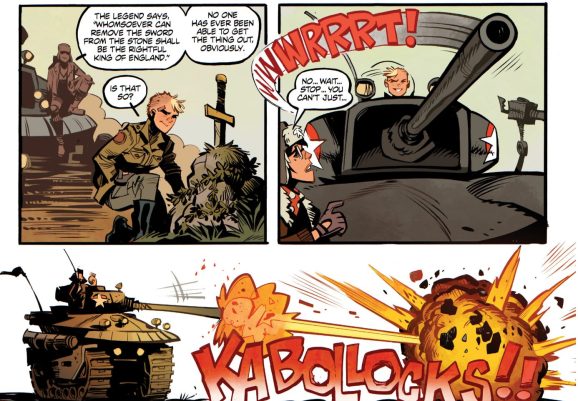 Considering where we are with current world leadership maybe allowing the person who blows up Excalibur to be a leader is not the worst way to do it. Going back to my rule of including panels that made me laugh out loud I find this rather humorous. Being impulsive tends to be a destructive way of life. When you impulsive and have a tank the end of the equation is always going to be explosions. At least this one had a point. 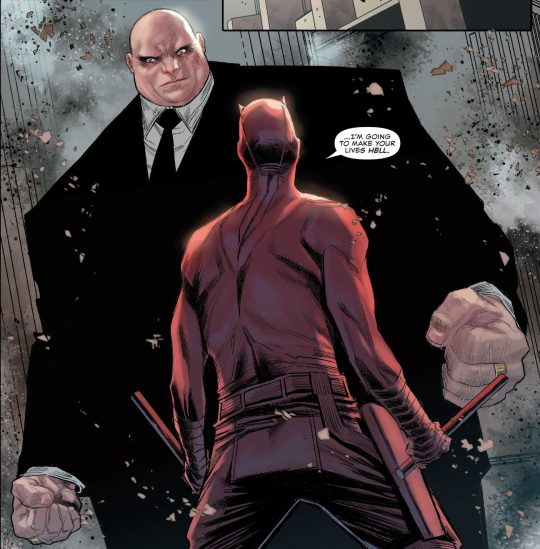 How do you make it clear Daredevil is a man with no fear? A panel like this does not hurt. Daredevil standing in front of a mass called Kingpin and not blinking. It let’s you know he might be down but not out. Having that ash fill the air adds some pristine atmosphere. You are just waiting for the fireworks to start.  Heck, William Fisk’s fists are the size of Daredevil’s torso. Some may argue that is not realistic. Realism is overrated. This is exciting. This is dynamic. This is comics. 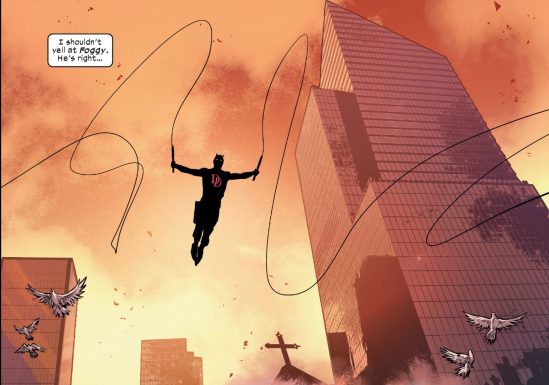 I want to say something elegant about this panel. Dive into what it tells us about the character of Matt Murdock and the themes this story is exploring. To be honest. I just think this looks cool as hell. Some artists are described as cinematic and panels like this are where that comes from. Some John Woo action with doves to set the stage. Having the crucifix fit right on the bottom of the page to remind us Daredevil’s beliefs are always with him. Lastly, it all aligns with The Man Without Fear gliding through the air with exquisite grace. I talk a lot about story when it comes to these panels. Story is not just about supporting the narrative. Sometimes it is telling the story of why these characters are as iconic as they are.

Interviews - Lili Wexu - Get Clever About Voice Acting and Announcing