Welcome to the Best Comic Panels of the Week. Each week I take a look at some of the best moments that happened inside the pages of comics.

Looking at this week’s selection and I noticed how the theme of violence and how it is depicted is quite prevalent. From the more comedic side to the more brutal. How this issue is handled impacts the tone of a story more than anything else within a comic.

I do try to avoid major spoilers but if you are the type of person who wants to know nothing about their books before you read them the following comics are included in this week’s picks: 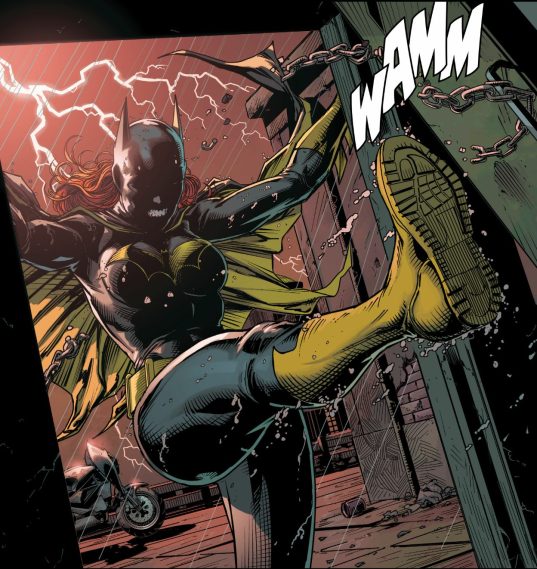 This panel by itself may not seem like an incredible sequence. No doubt on a sheer artistic level it is well executed. Still, at the end of the day just Batgirl kicking down a door. So what? Why this panel stood out to me was due to what came before. Barbara Gordon has been going through an emotional journey in these last two issues. The scars of her past are returning and new ones are being formed. The emotional darkness she has entered is literally portrayed in her fierce aggression. She kicks down that door with every fiber in her being. A lesser creative team would have Batgirl say something to double down on her eruption of anger and fear. Here the moment just speaks for itself. …Well does not hurt to add a little bit if lightning to add a bit of flair. 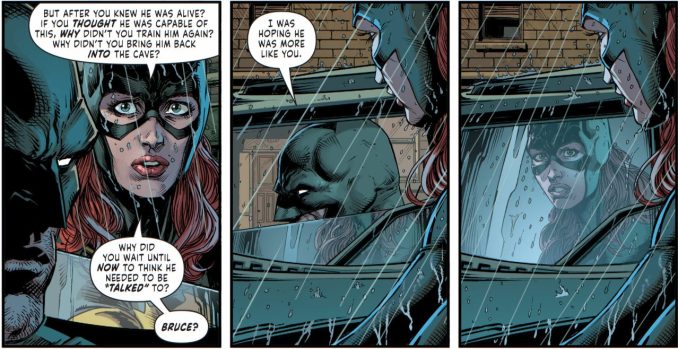 It is rare for Batman to ever admit he is capable of being wrong about anything. Barbara Gordon is probably one of the few people on Earth that can ask a question like this to Batman an expect any type of response beyond a chilling stare. Even as cold and distant as Batman is within this conversation he at least addresses the issue at hand in an unexpectedly honest manner, yet he is still a bit of a jerk. How he does not bother to turn his head to the look at Barbara. Is it guilt that is hindering his ability to look at her or something else? Not everything in this series has worked for me but this dynamic is compelling as hell. These characters are extremely damaged and a small push can lead them into the deep end of despair.

I love when artists do things that can only be done in the medium of comics. When they play with the rules the enhance a moment like this. Alienated is dealing with different worlds and realities so having a sequence that breaks what’s real enhances that exploration. Not only is the panel wall getting forcibly push back the characters are standing atop the background as if they are two separate entities. Having the color devolved to a more simplistic look akin to the Sunday funnies adds an additional layer of texture. Lastly the speech bubble looks like the combination of both a thought and speech bubble to represent how these words are not coming out like a traditional voice. A small and quick moment that shows how each part of the art team can come together to enhance a key panel.

The Department of H #1 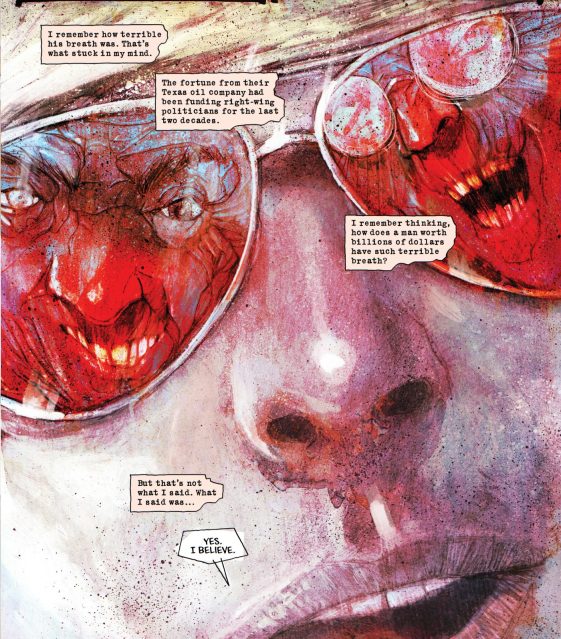 The art of The Department of H may not work for everyone because there is no attempt to look polished or well defined. Almost as if it is trying to hide something from you within the various pages you are reading. Now I would not call this book a horror story but this panel was truly frightening. Having these rich white powerful men look like living demons in the reflection of red soaked glasses may be a bit on the nose. Sometimes on the nose is what you need. Martin Simmonds is doing some special things with this book already. His coloring technique has this charcoal-like texture. Elements blend into one another keeping this chaotic look and pace.The world is melting into its own chaos. 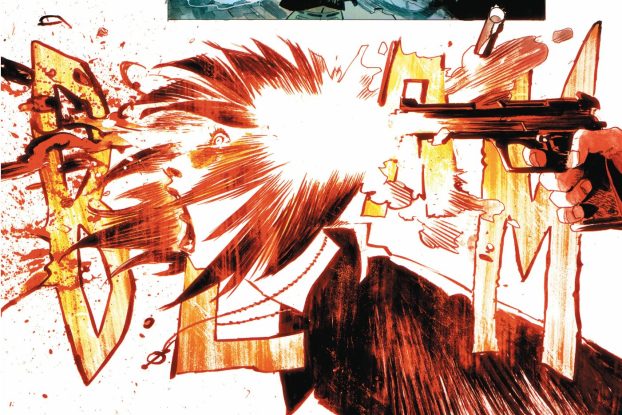 Violence is a delicate issue and can make a book ruin its message when not handled well, or enhance its ideas when it is rendered in such a creative fashion like this panel. Some revel in the bloodlust like Vampires on a bender while others take a more subtle approach. Then you get a panel like this that is sudden, abrupt, and extremely impactful without falling directly into either approach. Just gruesome enough to show how violent a gunshot to the back of the head is without fetishizing it. I love how the lettering lives within the scene to the point the B becomes bloodsoaked. Having her necklace loop around the L to condenses everything so tightly. Terrifically designed all around. 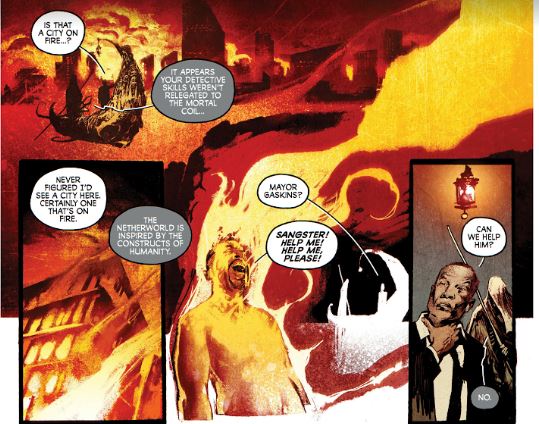 One of my favorite things about the Killadephia series has been the creative layouts this team puts together in each issue. Here we have characters traversing the actual underworld and its fiery hell.  An endless underworld is represented as these panels interact within one another. Flames of a tortured soul blend into the journey above while that same journey passes by in the darkness. Some could argue that there is a bit of flatness with how this page begins. The way the boat of death lays on the page makes it seem like it is floating in the air. I may be acting presumptuous but my assumption is that is intentional. We are not dealing with your normal physics in this dimension. By placing the boat in that way it makes that clear right from the getgo. 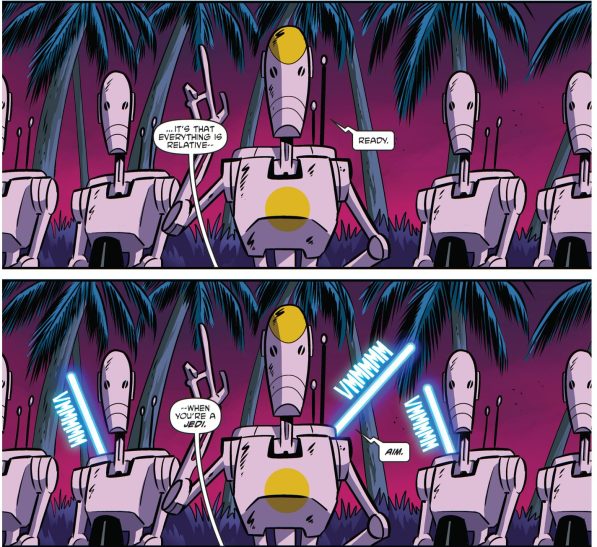 This is one of the unsung series of 2020. For anyone who is still trying to get over the ending of The Clone Wars earlier this year, you can still get more of it reading this book. Here’s a good example of how it captures a similar magic of what made that cartoon one of the best Star Wars stories. Heroes showing up at the very last minute will never get old. Who also does not like a good entrance? No words. No rallying cry. Just the infamous noise of the greatest make-believe weapon turning on. As a fan of Star Wars, I live for bits like this.

Voyage To The Stars #2 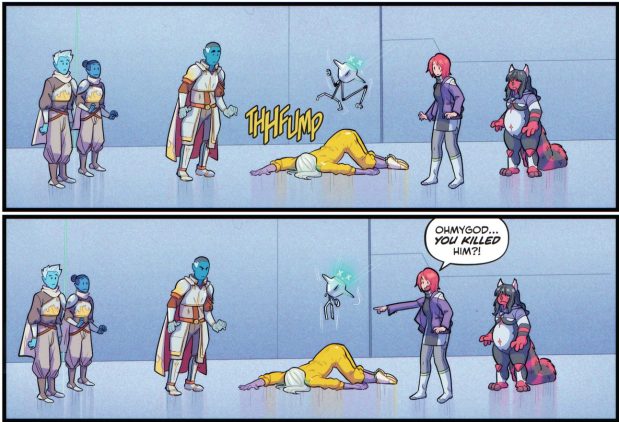 Voyage to the Stars #2 had a plotline that was akin to Weekend at Bernies in Space. For young people who do not know what the movie is… First I hate you and your youngness. Second, it was a movie about a guy who died but people had to pretend he was alive causing many hijinks to ensue. The ’80s were a weird time. Part of me feels bad because I am ruining that payoff. Seeing the facade finally fail and the deepest of Hail Mary’s thrown-up made me laugh more than any other panel this past week. Just know that if you find this moment funny you will certainly like the rest of the book as well. So maybe I did not ruin everything as I feared. 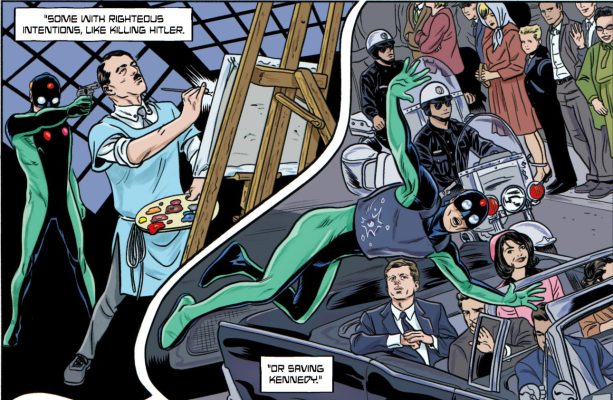 The Kennedy assassination is so hot right now. Not only was it referenced in this panel but with the pages of The Department of H as well. Going back in time to jump in front of J.F.K. with a bulletproof vest is funny, just not as funny as shooting Hitler in the back of his head while dressed in his finest smock. Just the way he is standing elicits a few laughs from me. It is utterly ridiculous which is exactly what you expect with the Allreds. 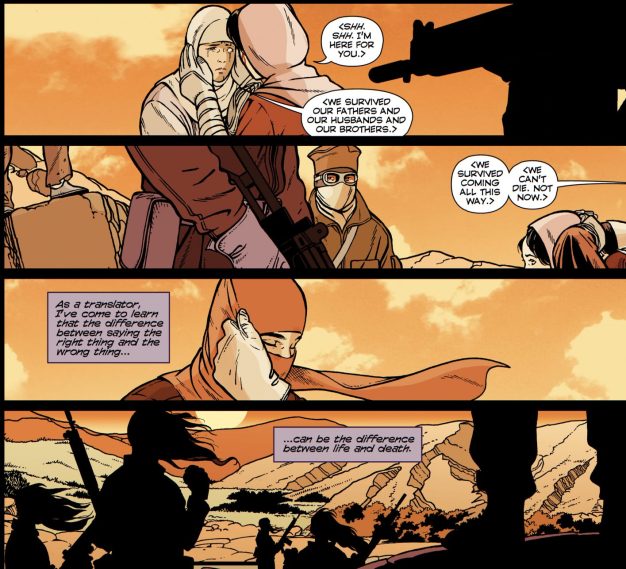 I was not expecting Year Zero to have an emotional moment quite like this. Right, when the world is gone to hell you get a bit of hope. What does not happen here is just as important as what does. A lesser writer could have double down to make it clear the message that is being made. Instead, the shadow of long hair waving in the wind reshapes everything about the scene that came before. This is how you create a cinematic moment in the pages of a comic book.

The Immortal Hulk: The Threshing Place #1 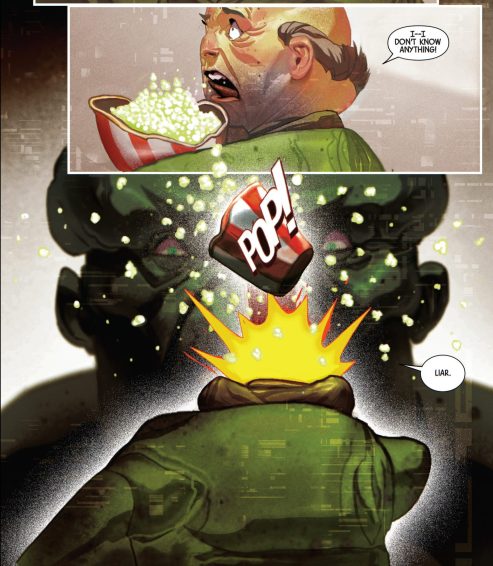 So that’s what happens when you squeeze them. Now we are getting to the part of this week’s panels where violence is depicted with more comedic sensibilities. Is there a real reason why this character would have a bag of popcorn at this moment? No. Not really, but that does not matter. It is a clever idea that gets the point across regarding just how strong Hulk can be when he taps into that anger.  This is reminiscent to me of what happens to horror franchises after they have been around for a couple of movies. Their kills become more creative and more comedic. 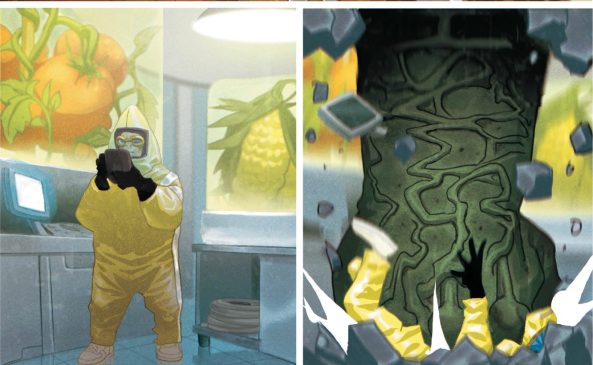 Sorry for the pun but this is one hell of a one-two punch. A quick scene that is fun to think about. Imagine you are just going through your day being apart of your typical evil scientist organization. Maybe you stopped to take a personal call or you are trying to update your fantasy football roster before your union earned fifteen-minute break is over. Right before you put your best player that just went on IR to the bench a gigantic green hand comes crashing down breaking every bone in your body. Worst part? You just bought that phone. None of that is hinted at in any way mind you. I just it funnier the more you think about the life of this poor stooge before his well-earned demise.

So those were my favorite panels of the week. What are yours? What stood out for you in comics this week? Comment below…