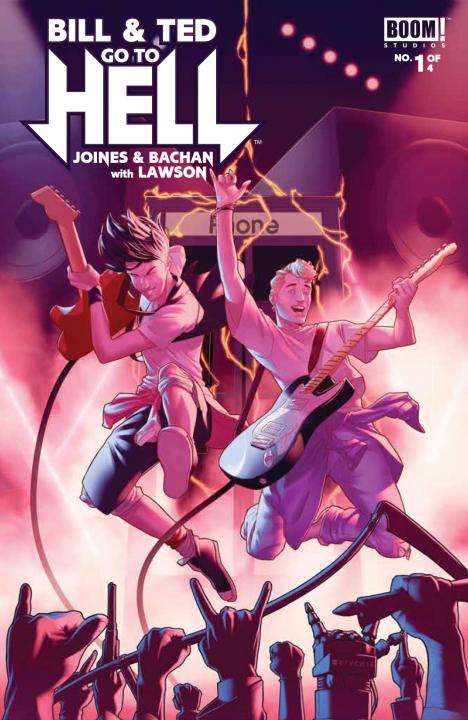 Personally as a comic book reader I tend to be hesitant when picking up licensed properties. Perhaps it is the 90’s comic fan in me that got used getting burned so badly when properties I loved were transformed into comics I despised. Lately that mindset has been challenged a great deal especially by companies like IDW and Boom Studios. It was due to that track record that I decided to read Bill & Ted Go to Hell, and I am here to tell that any fan of that franchise would be doing themselves a disservice if they do not read this miniseries.  It encapsulates the gnarly characteristics that made Bill & Ted such a cultural icons over twenty-five years ago, while adding in some intriguing comic book flair.

With it being  25th anniversary of Bill & Ted’s Bogus Journey it makes sense we are seeing this book model so heavily after the much superior second film. Bill & Ted fans may already know ‘Go to Hell’ was the original title for the sequel that was later change to the more family friendly ‘Bogus Journey’. This continues the story shortly after the events of that transcendent sequel.

By taking elements from both films this feels like the third movie we never got. Similar to that journey this series sees Bill & Ted return to hell fbut or a different reason this time as it has been taken over by a most notorious dude. This time Bill & Ted aren’t alone as their historical friends like Abraham Lincoln, Billy the Kid, and Socrates return to assist the ‘Wyld Stallyns’ on their epic quest. Also fan favorites like Station, Rufus, and Death are also a part of the fun.

Fun is the perfect word to describe this comic series. This is the type of book where you get to see  Abraham Lincoln and John Wilkes Booth have a de facto lightsaber battle with the fate of the universe on the line. Who doesn’t want to read that? There are some attempts at some more potent emotional moments, especially with a character/real historical figure like Joan of Arc. It makes sense when  you have  this deeply religious person literally walking in the depths of hell that we would see her psyche  tested more than others. The issue is these moments did not ring true and felt out of place with the rest of the comic.

However, Brian Joines did a superb job capturing the voice of all these characters. His dialog has the same spirit and energy of the films and most importantly he nails the sense of humor.  When the series opens up with Death playing a board game it is a good sign for things to come. Some could argue Joines relied too heavily on past jokes, but overall I felt he played proper homage without feeling overly derivative.

Bachan’s art was serviceable but not outstanding. He got the job done but is clearly not the reason you would pick up this book. I did appreciate his character designs that did not simply recreate the real life people in comic book form. They reminded more of the short lived cartoon series rather than the real life actors. Where the art let me down was in the design of both heaven and hell. While it certainly takes elements from the films the look was overall bland.