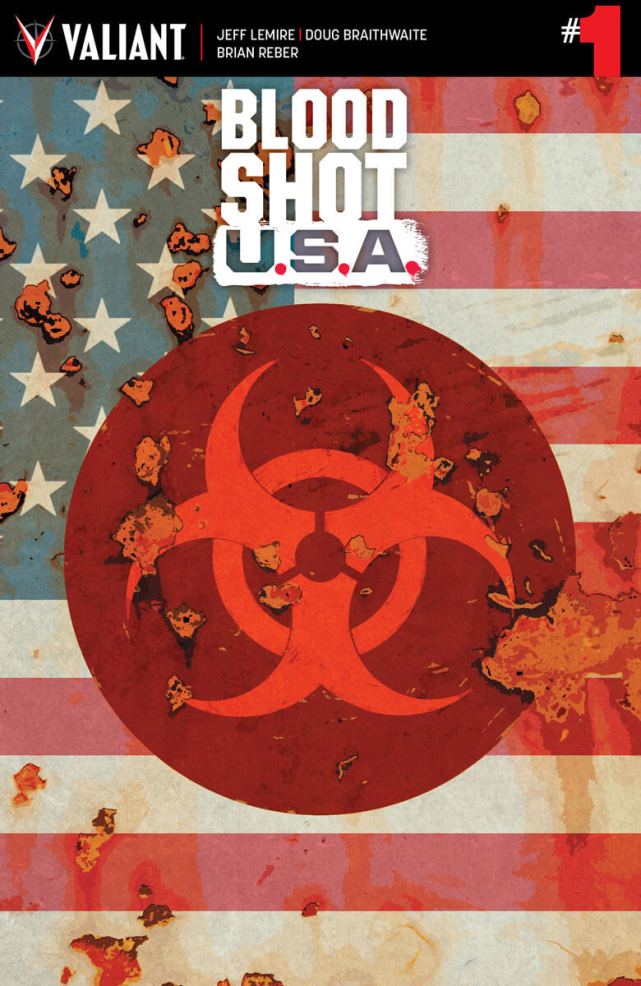 One thing is for certain with the Bloodshot comics—they never stay stagnant. In a very short period of time Bloodshot series has been reborn, traveled to a dystopian future, and most recently be stranded on a death island. With the launch of the Bloodshot U.S.A. miniseries the scope of this series expands exponentially as the Bloodshot virus wreaks havoc in New York City. Now the machine-made pathogen that made Bloodshot into the world’s most dangerous weapon is rewriting the DNA of everyone in Manhattan.

Right away this has the big story feel you would expect with most summer event titles, but with a much more focused story. Unlike Bloodshot: Reborn this is not an ideal place for new readers to jump on board, especially for those who are completely unfamiliar with the Valiant universe. The basic premise is easy enough to understand, but who and what all the moving pieces are will not be very clear for novice readers.

Jeff Lemire does fill the issue with some flashbacks, but they are used less to catch up new readers and more to fill in holes for those who have been keeping up regularly with the series. For those wondering how and why Deathmate was created we are finally given an answer. Lemire handles the juggling of these flashbacks quite well. The pacing is nearly pitched perfect as the story pops in from one time period to the next. So much so the ending somewhat sneaks up on you. Right when the story starts to get going the issue comes to an abrupt end. They say leaving them wanting more, and that is exactly what this issue does. 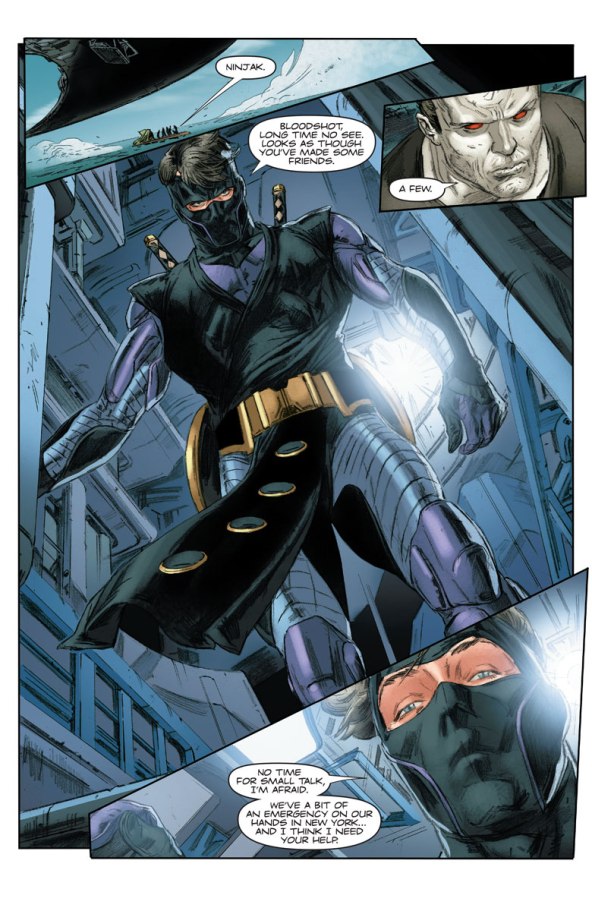 That is not to say this comic is without its issues. It is not like the idea of an evil corporation causing mass disaster in order to gain profit and power is all that new. That is somewhat of a weak point of the story so far. After seeing what happened in Colorado Project Rising Spirit gets the idea of replicate what happened to a greater scale. A machine-made pathogen will be released into the heart of New York causing people to transform into crazed killers with similar powers to Bloodshot.

With us being in the end of October it is fitting to have what is basically a zombie story on robotic steroids, but the motivation behind it could be stronger. There has to be a better way to make money than infecting millions of people with a destructive virus so you can sweep in to save the day with a cure at the last moment. To be fair there may be more behind this story that will be revealed later. For now it is the one element of this story so far that is a little weak.

As a company Valiant does not go to the crossover well all that often. So when their characters cross paths in comics it still feels special. Even those characters like Ninjak and Bloodshot have been around for quite a long time now watching them interact is still a fresh concept. Right away it makes this book feel special and important. That is a sentiment to how well run Valiant is as a company and as story tellers. They treat their characters they way comic book readers what to seem them treated.

Overall Bloodshoot U.S.A. #1 is a successful at doing the leg worked needed to make this story work. The stakes have been set, the characters are in place, and now it appears the chaotic fun will begin.  Bloodshoot U.S.A may not end up having the depth of Valiant’s best work, but after this first issue it nearly guarantees one hell of a great time.