Marvel certainly loves their synergy don’t they? Whenever a Marvel TV show or movie is released you can pretty much guarantee a comic will be there to soak in the momentum. This year X-Men: Apocalypse led to ‘The Apocalypse War’ in the X-Men books, Captain America: Civil War was tied with the major event Civil War II, and now on a smaller scale the Luke Cage Netflix series had led to a new Cage series written and drawn by Genndy Tartakovsky.

It is exciting to see a name like Tartakovsky creating a comic. The man who has given us such properties like Tartakovsky Dexter’s Laboratory and Samurai Jack does appear to have a comic sensibility to him. His artistic style and sense of humor translate well to the character of Cage. Well, at least this version of the character. Somewhat surprisingly this book has little resemblance to the series currently available on Netflix. Beyond the classic costume this Cage is far more cartoonish and over the top. While the small screen version is more of a down to earth real world take, this series is an exaggerated celebration of Cage’s classic 70’s style.

Tartakovsky writes the book as if it was literally being released when the character was first created. Up to the point of have editor’s notes commenting on current storylines like the ‘The Phoenix Saga’.  Overall the story is straightforward as it gets. Heroes are disappearing and no one seems to know exactly why. This leads Cage to traverse the city running into long time foes and ruining local kids pickup basketball games. 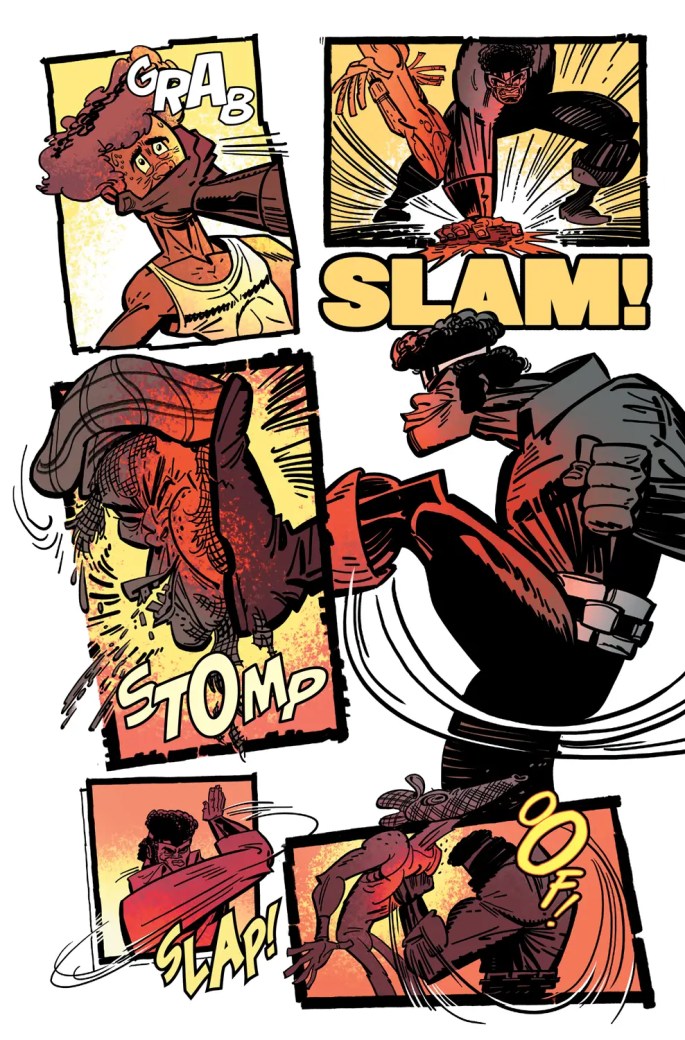 One thing is for certain Tartakovsky has a fondness for the character of Cage. Where Cage’s other current series Power Man and Iron Fist slightly touches upon his tiara wearing origins this issue revels in it.  Unlike that series and the television show this is void of any form of seriousness. Every conversation, character interaction, or fight sequence is played for some sort of laugh. That makes the book a lot of fun, but it also makes it rather thin.

Anyone who has watched a Tartakovsky property previously would most likely enjoy the humor here. You have a great deal of physical humor as bodies crunch and bend to cartoonish portions during fights.  Some of the humor was a little to random for my taste. At one point we see a rather random X-Men character cameo that had little justification or payoff.

Tartakovsky illustrates the series with an amalgamation of his own style and the classic seventies look. Some modern readers may be turned off by the simplicity of the art design. Personally I was a big fan in large part to the coloring that popped off the page. There is not an intricate attention to detail, however there is a fluidity to the pages  that give the book a consistent energy.

By far what this book has going for it is its resolute dedication to having fun.  You can feel the joy  Tartakovsky had while crafting this comic. It is clear he had a desire to recreate a type of comic he used to love reading that no longer exists. Cage #1 may not convert new readers to become Luke Cage fans, but for those that have any fondness for the character and his history there is a lot to get excited about.

All Things Transformers - Origins of PecanCtMichael