Welcome to another addition of Catching Up with the Classics where I talk about a comic book series or story that I have failed to read up to this. This time I am taking at  Amazing Fantasy #15.

I have mentioned in this series how much the X-Men cartoon series impacted my connection to comic books, and right there was also the Spider-Man: the Animated Series. Back in the day, I  was a member of the Fox Kids Club so I would receive a monthly magazine about all the different cartoons that were going to debut shortly on the Fox Kids Saturday lineup. It was long before we got updates about everything long in advance due to different blogs or social media. Through that subscription, I first learned about the upcoming Spider-Man series and immediately got excited. Once it debuted I immediately became a fan and learned so much about Marvel characters I knew nothing about prior.

When I got back into comics in the early 00’s I read a lot of the 90’s Spider-Man books. I know for many those runs and 90’s comics, in general, are looked down upon, but for me, many of them hold a very special place. Stories like Maximum Carnage and anything to do with Venom were a big part of my childhood. Similar to many of the video games at the time as well.

I have not read a great deal of early Spider-Man stories. Pretty much anything prior to the 80’s I have failed to catch up with, but luckily that is where this series comes in handy. Everyone knows how important Amazing Fantasy #15 was to comics. People are excited to be in its presence, and for the select few that have been able to hold a copy, it’s a seminal moment in their geekdom. My question though is if that importance can be separated from its actual quality as a book. Does it hold up to today’s standards? Have the recent reboots to the Spider-Man lore actually told the story better? Thanks in part to Marvel Unlimited I can answer that question without having armed guards by my side.

What was rather shocking about Amazing Fantasy #15 was the fact it is not the only story in the comic. Up to this point, I assumed the Spider-Man story made up the entire issue, but it was only one piece of an anthology series. It’s like being the band that performs after the Beatles on The Ed Sullivan Show.  No matter how good you are there is nothing you can do to surpass such as historic moment.

Keeping that in mind the debut of Spider-Man was only eleven pages long. A character that forever changed the face of an entire industry debuted in only eleven pages. This was the sixties so those eleven pages had enough dialog to fit an entire volume in today’s world. Leaving people wanting more is usually the best way to go, and maybe that is a big reason why Spider-Man caught on the way that he did.

With great power comes great reasonability may be the most quoted line in all of comics.  Since the first Spider-Man film its notoriety has only increased to the point where people forget it is a line from a superhero comic book. Reading this it was shocking in how it is not actually said by Uncle Ben. Through my reading of comics and watching of cartoons and movies, I assumed the words were first said by Uncle Ben in Amazing Fantasy #15. The fact is those words actually do not appear until the final panel as Stan Lee reveals the stories overall message.

If you have never read a comic from this era you should defiantly prepare yourself. It was a very different time when comics were clearly directed to a younger and broader audience. As mentioned there is a lot more dialog as nothing was left for interpretation. For someone who never experienced that type of comic before it can be a lot to take in at first.

Also if you are new to comics or know little of comic history it is important to know the state of comics at the time. It was a time and place when kids were rarely the center of a comic book. Sure they would be the occasional sidekick but never would they lead the story. Superheroes were meant to be larger than life and with that never had real life problems. The Daily Planet was not going to run a front page story about the menace of Superman nor was Bruce Wayne going to spend time worrying about paying all his bat bills.

Spider-Man changed much of that. He was a high school kid who simply was at the wrong place at the right time. Being a high school kid his first thought when he received his powers was not to fight crime, but rather to get cash to help pay the bills, and of course how these powers could help him on a more social level.  Many of the elements that made this story standout at the time have become common place with today’s heroes.

Of all the Stan Lee comics I have read this is probably the best. Keep in mind I have not read a lot of his infamous Fantastic Four run. The silliness that tends to get old with his writing is much more limited. You could tell Lee knew the chains were off so he could try something new. When he was writing this issue he knew the series was canceled so he could approach many of those topics that were taboo at the time.

In my opinion, Spider-Man has the greatest origin out of all the different superheroes. Sure being bitten by a radioactive spider is rather ridiculous, but it was commonplace for comics at the time. What makes the origin extra special is not how he got his powers but what he did with them afterward. Lee’s wiliness to make a flawed character led to the best justification for someone being a superhero ever.

All heroes are born from tragedy but none were players in it quite like that of Peter Parker. Bruce Wayne could not stop the robber from killing his parents. Clark Kent was a baby from a dying world. They were viewers of tragedy where Parker was a participant. His sense of duty is a lot more valid because of what happened when he failed to live up to his responsibility.

A big reason why that works is the relationship that is built between Peter and his Uncle Ben and Aunt May. Again this was only an eleven pages story from the 1960’s but when that death of Ben came it hit pretty hard. Similar to when Peter was able to reveal the person who was responsible for the death of his beloved uncle.

Steve Ditko’s art is also fantastic from the start. By no means is this the best looking Spider-Man comic but much of the design he crafted has remained the same for generations. Trying to make teenagers look like teenagers is not as easy as it may seem. Especially when those teenagers grew up in the 1960’s and dressed like millennial hipsters.

Overall nothing can take away the importance of Amazing Fantasy #15. It changed comics forever and it remains a great read. It broke a lot of barriers but still remained a comic of its time. By no means is its content timeless but the message still remains strong. Look at the fact that Spider-Man’s origin has pretty much remained unchanged since its inception. The same origin I saw when I was a kid watching cartoons is the same origin that exists in this issue and every movie and subsequent reboot. Nuff Said. 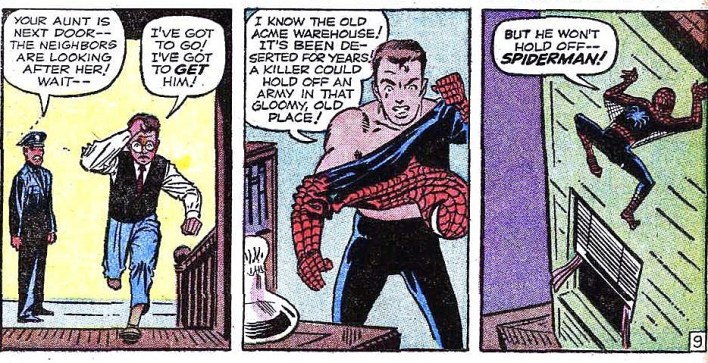