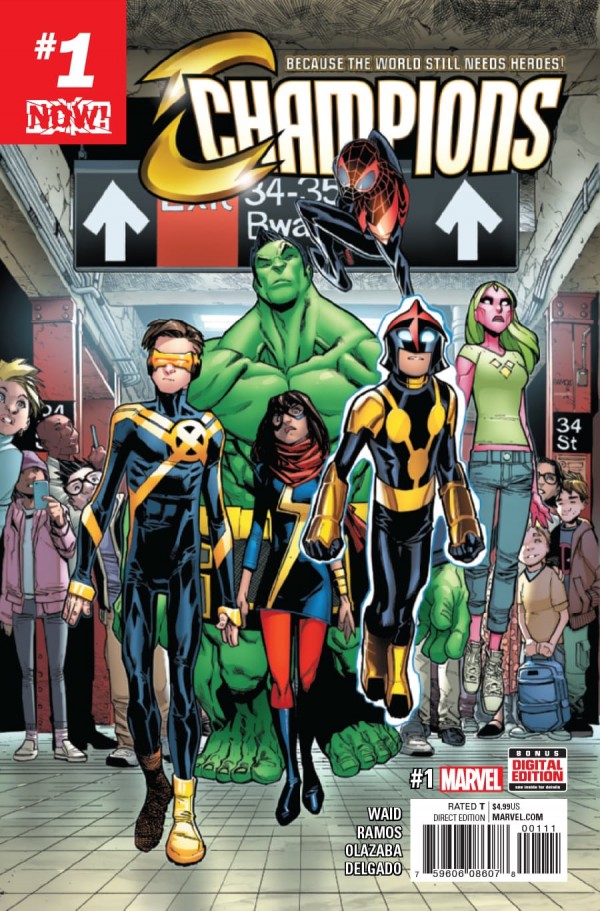 When Marvel announced they were having their annual relaunch again the overwhelming reaction was dismissive. After Marvel Now, All-New All-Different, and now Marvel Now Divided We Stand it is challenging to get excited by the constant changes. Where DC Rebirth had brought a great deal of attention Marvel Now…again has received considerable less fanfare. Despite the lack of hype I do have to hand it to Marvel because their first week of new books has yielded some very promising titles. On the top of that list is Champions.

Mark Wade helms this title and that choice makes a lot of sense. The man is a legend in the industry. He is basically the Stephen Spielberg of comics. Waid has been in the industry for years creating some of the most influential stories ever created and continues to do so to this day. Despite that fact his recent run on All-New Avengers has been on the inconsistent side. He simply has not been able to bring the magic you would expect. The standout aspect of that book though as been the newly formed kinship between Ms. Marvel, Nova, and Spider-Man. They are these three young heroes bonding over their similar struggle to juggle life with living up to their heroic namesake.

Now that relationship is moving to center stage with this Champions book. In the same vein as Young Avengers and Teen Titans this series sees a group of teenage heroes coming together to form their own team. One of the biggest challenges to this series has nothing to do with the book itself. The events that lead to Ms. Marvel, Nova, and Spider-Man leaving the Avengers have not yet been told. We have yet another classic case of fallout from a major event that has not actually ended. For the most part that issue does not impact the comic book a great deal. Considering the events of Civil War II so far you can put the pieces together to figure out why these heroes would no longer want to be Avengers.

Format wise this issue follows the typical ‘get the team together’ format. After deciding they want to form their own team Ms. Marvel, Nova, and Spider-Man look to bolster up their ranks. First stop is the Totally Awesome Hulk who is trying to rescue workers after a cave collapse. Waid has done this style of story before and his experience shows. This could have felt like an exposition dump but he keeps the action and story flowing simultaneously. He places each character into a situation to highlight both their powers and personalities. After bringing in the Hulk they also add Viv based on Cho’s recommendation. Now with the tech and firepower they need this group of young champions sets off on their first mission.

One character I questioned would work for this series is Vision daughter Viv. Considering the tone and what has occurred in The Vision comic I have a hard time understanding how it could fit in the larger Marvel 616 universe. Already Viv does come off like a different character. She is much more like the typical younger version of Vision you would expect, and not the darkly depressed version Tom King created. Based on what occurred so far Marvel seems to be taking just the pieces they want from King’s Vision title and leaving what does not work for grander Marvel behind.

Humberto Ramos was a great choice to do the artwork for this book. His has the type of style that has help define what this era comics look like.  His and Waid’s work really complement one another here. The tendency for books today is to switch artist on the regular, but I hope Ramos stays on for the long haul. This has the makings of a partnership that could yield something special.

When it comes to the first  issue of a team book the biggest thing I look for is a dynamic that offers something new and fun character interactions that make sense. Champions #1 has both of those things. In the final panels of this issue Waid shows that although these heroes may be young they are not without understanding of their greater place. Ms. Marvel gives quite the eloquent speech regarding rightful force that will surely help define this series going forward. Those that look at comics as an escape from reality may find issue with bringing in such social and political commentary so abruptly. Personally I feel it has never been more important, and considering the argument that has been raised in Civil War II it would be wrong not to have some element of social commentary.

As much fun as it is to make fun of Marvel for their constant gimmicks and relaunches I have to hand it to them with Champions #1. If you are going to rebrand yourself yet again this is a good place to start.