Welcome to another installment of the Best Comic Book Covers of the Week. If this is your first time reading one of these articles you may notice a bit of a trend. I am not just looking for covers that look cool. I want to see a story being told that is unique to the book itself. Now, you will find times I go against the concept. Hey, I am only human. If a cover is doing something special I will include it no matter the story it is telling.

With that let us now get to this week’s choices. 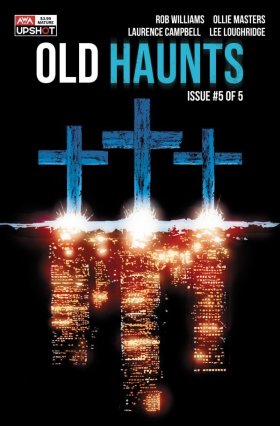 When I look at this cover I find the imagery well executed in the way it grabs your attention, however, I am not able to fully put the message together. Given I am not reading this series so that could have something to do with it. So it is not a failure on the artist. I take from it more of a comment on religion’s connection to big business rather than something horror related. Another take could be this connection between past and present. Considering the usage of three crosses this directly relates to the crucifixion of Jesus Christ. As society has shifted what they worship. Some could argue the concept of financial success has replaced the need for faith. Whatever the reason may be the cover intrigues me enough to go back and give this series a shot. 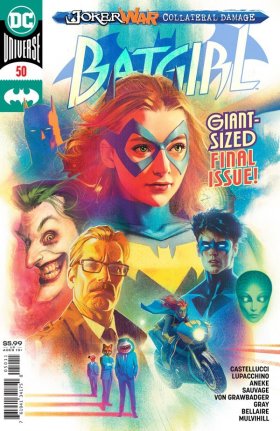 This is the first of two collage covers to make this week’s list. Often I skip these because they can be a bit dull, but this was extra special.  Seeing Joshua Middleton was placed on the main cover for a change was a strong choice by DC. With this being the last issue of Batgirl (for now) he brings to life the key people that have shaped her normal and superhero life. Two key points make this cover work. Starting with the color choices. There is a color pencil type of execution to the final product. Lastly, the Batman placement is pretty spot on. Nearly every time I look at this cover I feel like he is randomly appearing in that classic Batman fashion. 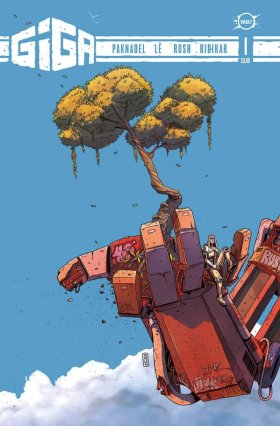 Similar to the Batgirl cover the colors are key to making this cover work. The rusted out robot arm is played against the pristine blue sky to make it a striking image. Typically dystopian future stories are partnered with dark and dreary visuals so by simply choosing a brighter look this already stands out. That is not even counting for the fact you have a giant robot holding a tree. Maybe it is attempting to take up the hobby of bonsai tree maintenance. The added graffiti give you a sense this robot has been in stasis for some time. First issue covers can help a great deal in world-building before you even open the book. For a cover that has minimal imagery, this does a lot of heavy lifting. 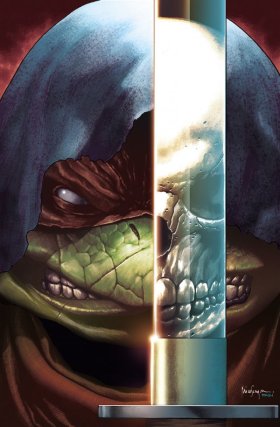 Teenage Mutant Ninja Turtles: The Last Ronin #1 has what can only be described as a trillion variant covers. I looked at them all and there are plenty of great covers to choose from. This one stood out from the bunch for me. It is so overused but the use of reflection gets me nearly every. Considering how this series will cover a broken-down Turtle this relates well to that theme. Having the skull like up with the face of the turtles makes it more than just a cool design. There is some story here which cannot be said for many of the other variants. 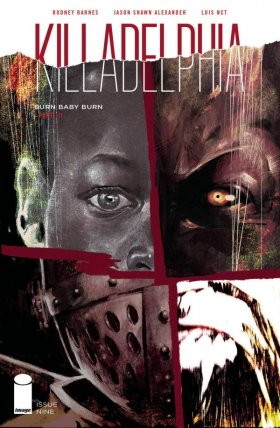 Similar to the Last Ronin cover this takes different images to merge them into one final design. Obviously, the end product here is much different. There is texture to this cover that makes it appears like a living piece. Scratches and claw marks can be found throughout as if something is captured inside looking to break free. Although one downside to that effect would be the hesitation to want to open the book. Evil Dead has shown us what can happen when you open evil books. Who knows what ramifications this could lead to if this luckily was not a work of fiction. Everything about it screams chaos along with an attempt to control that chaos in graphic fashion. That is the essence of what this series has been. People trying to control the world falling apart around them. 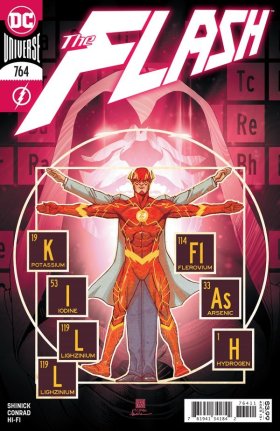 Here we have a cover that had a theme and went for it. Starting with taking Leonardo da Vinci’s Vitruvian Man and adding in elements of the Periodic table. Considering the Vitruvian Man was designed to celebrate the meshing of art and science it is great seeing that concept continued hundreds of years after its inception. Part of me wishes this was using the classic Flash suit because those lines are nothing but a distraction in a still image like this, but alas that is not something the cover artist can really change. Despite that this reminds me of old school superhero covers that packed so much on their covers instead of just images of heroes posing. 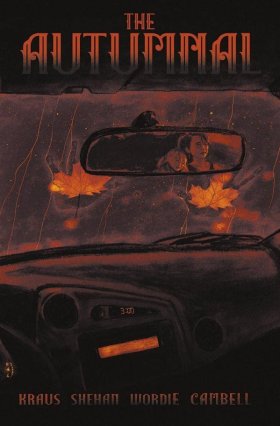 At first glance, this cover has a calming presence. Orange and black meld together to give the atmosphere of a peaceful rainy Autumn evening. Even the characters appear to be in a state of composed calm. The type of weather that is perfect for a good hoodie. As you peer in closer that calm is really an illusion as two handprints grip the window in an ominous fashion. Often the best scars are those that require you to pay attention as they use your attentiveness against you. 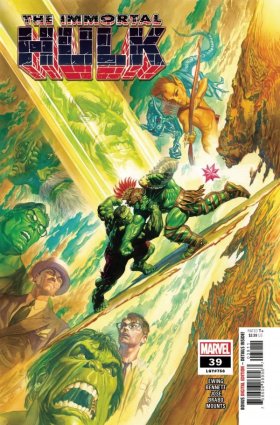 Alex Ross has had quite the career so I will risk being hyperbolic by saying his covers for Immortal Hulk are perhaps the best thing he has done in his career. Marvels is still up there but with these, he has tapped into a new dimension. His storytelling and risk-taking have hit new levels. This is another collage cover highlighting not only the history of Hulk but the current war that is happening in the pages of this arc. Much of this series has been about exploring the history of the Hulk so this helps continue that thread. Hulk is a type of character that is at war with himself and his past as much as he is with outside forces. Here we see those struggles epitomized. 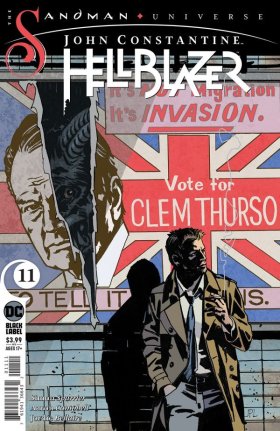 As we are a week away from the US election this cover feels perfect. Well, perfect for a very imperfect time. John Constantine: Hellblazer has been one of the best ongoing series to touch about today’s current social and political climate.  Many that have tried have do nothing more than replicate what has been said time and time again. All you need to do is look at this cover to see where these creators stand. Even if you oppose that stance you can at least appreciate the design of this cover. How the poster spewing xenophobic propaganda tears to show the monster beyond the man is on point.  Vertigo, well now Black Label, has always been about books that are bold and take on important issues. It is refreshing seeing a book continue that legacy even after the imprint has been abolished. 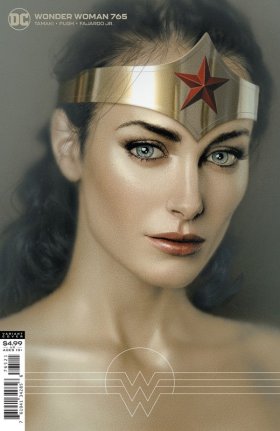 Every so often I will go against my stance of not including books that are limited in storytelling. Once again it is a Joshua Middleton Wonder Woman cover that I had to include. Similar to his cover for issue #763 he is displaying the complete picture of who Wonder Woman is as a person and an iconic superhero. From displaying her power and might to showcasing her beauty and femininity. On a sheer aesthetic level, this is plainly gorgeous. There is a kindness expressed within those eyes that is comforting. Now, I have enjoyed Middleton’s work with other characters such as Batgirl above. However, what he is doing with his Wonder Woman covers is on another level entirely. 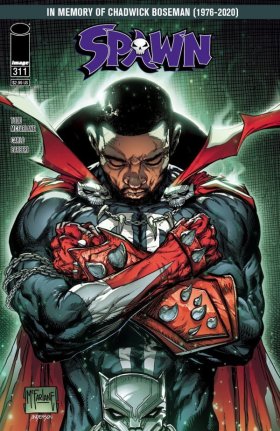 There was no way I could not include this cover on this week’s list. Typically celebrity deaths are not things that really impact me. I am not a monster so I will of course be sad. Just not really knowing a person makes it difficult to go beyond that. Chadwick Boseman’s passing was one that did hit me quite hard just in how shocking and unfair it seems. A person who looks to be on top of the world is struck down in a year where we need as many heroes as we can get. Our culture does partake in celebrity worship perhaps too much, but that does not mean a man of Boseman’s stature does not deserve a tribute like this either. By all accounts, he was a great man who meant a lot to many. Considering the role Black Panther played in providing representation, using Spawn as an avatar is fitting. Todd McFarlane made the choice of making Al Simmons African American in a time when that was an extreme rarity. Beyond that, it serves as a reminder of the preciousness of life. How cancer is something that impacts us all no matter your stature. I would rather live in a world where this cover does not exist and Chadwick Boseman is still with us. Alas, that is not the case. There is still solace to be found. If this cover is any indication the legacy he left is not going anywhere.