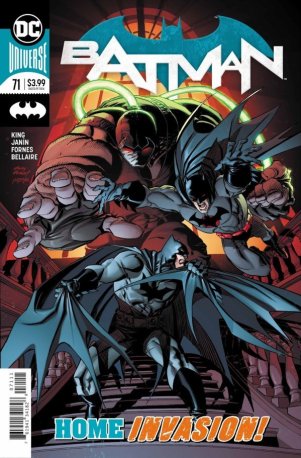 Description: “The Fall and the Fallen” continues! Will it be father and son working together, or tearing each other apart? When it comes to the Waynes, expect a little of both. In the quest to get Bruce Wayne to hang up the cape and cowl, Thomas Wayne is going to have to use a little tough love. Only, not all the muscle behind it will be his own.

Review: I have been a major defender of Tom King’s run on Batman as even when it does not fully work for me I find the failures more interesting to experience than generic success. Issue #71 may be my least favorite of his run thus far as I was left underwhelmed throughout. Part of it was just the sheer confusion which may be purposeful but still a bit frustrating.

Also we a narrative enters into the muddy territory of a possible unreliable narrative type situation I can often check out. I am still in it for the long hall mind you. The art as always is stellar. Rarely does having multiple artists on book work, but here it at least makes sense in order to establish a distinct setting. Still, I’d like to see Jorge Fornés just get a long run to draw Batman. Love what his style brings to the title. 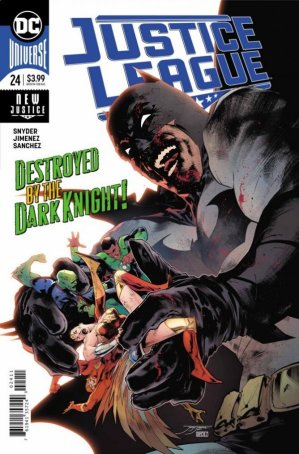 Description:  “The Sixth Dimension” chapter five! The League’s plan is in full swing, but one member of the team isn’t on board with their message and sides with the World Forger! Betrayed, there’s only one person who can turn the tide of this battle. Can Superman find the strength to escape his prison planet and save the Justice League, or is the League doomed to live out their days trapped in the Sixth Dimension?!

Review: When it comes to Scott Snyder’s Justice League I find that I often enjoy every other issue. The more streamlined issues I find much more engaging than those that just build plot. Issue #24 of Justice League has a little bit of both. It starts off strong with a look into the everyday life of Superman and his family that Jorge Jimenez renders with pristine wonderment. Even the concept of what truly worries Superman and when is an intriguing idea, however, Snyder sometimes just cannot help himself and the need to label such moments as ‘grey kryptonite’ goes one step too far. It is moments like this when the author’s voice overtakes that of the characters and the need to unnecessarily build mythos ruins what is a strong enough moment on its own.

This issue also demonstrated just how convoluted everything has gotten to this point. When hypothetical situations meet other dimensional worlds set in a possible future the impact of major decisions is muted in the chaos that is this narrative. Watching all these dominoes fall into place can work, but the board has become so massive what is at the center of all this is lost in a sea of plot threads. If more time was given to allow for this story to breathe it would lead to a much richer experience. Everything is so geared to adding to the mythos of the DC universe the characters are left behind outside of a key scene here or there. 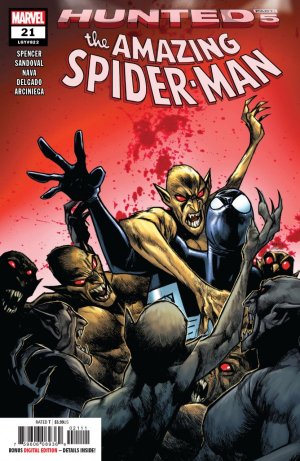 Description: What’s left of the animal villains are united under THE VULTURE! While that animal army are going up against the Hunter-Bots, Spidey is too tied up with Kraven to do anything. Things have spiraled FAR out of Spider-Man’s control as the most harrowing story of 2019 races to its conclusion!

Review: The Amazing Spider-Man #21 – I thought The Hunted Storyline started off strong and the .HU issues while oddly named helped to add personal stakes. However, since the highpoint of #18.HU that structure has gotten in the way of the general progression of the story.

Every issue has had a similar pattern that builds to a major cliffhanger that tends to get undercut by the issues that follow. What started as a straightforward concept has become muddled and unfocused to the point of being disorientating.

There is still hope and a potentially good story here if the ending can bring things around. I have greatly enjoyed Nick Spencer’s rule as whole but this lately simply has not been