Before I get started revisiting the comic I wanted to provide my personal background into this issue and why I chose it to revisit. This issue began what is probably my favorite run in Marvel comics history. A big reason for that is how this series impacted me as a comic reader. I had not been actively following comics at the time, but after a new comic shop opened up near me that began to change. 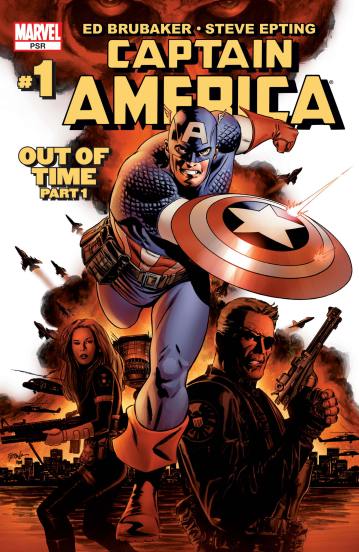 I am grateful as the owner strongly suggested I pick up this run. I was hesistent because at the time Captain America was not really a character I cared much for, however, he knew I had a love of history and told me to give it a shot.  After the first issue, I was fully in. What struck me the most was how it utilized Captain America’s history as a solider to tell this phenomenal personal story about what his life had really been like. It humanized Steve Rogers in a way I had never really read before.

Now as a more seasoned reader I wanted to go back and see if my admiration was overblown or is this was as good as I remembered it.

Going back to this issue it is important to have context for the current state of Captain America’s world at the time. This takes place shortly after Avengers: Disassembled where the Avengers literally imploded and Cap once again lost soldiers in arms. In this case fellow Avengers like Hawkeye and Vision. Death in comics is often looked at as a crutch that ultimately means nothing. It is only a matter of time until they come back to life anyways.

There is certainly truth in that statement as death is overused, however, despite the fact Hawkeye eventually returned we can see this as an example of how to use death to construct a better story.  Right away we are presented with a broken Captain America who is off his game.  To complicate matters further his greatest enemy has gotten five steps ahead of him without him even realizing the game has started.

Beyond the establishment of stakes, it leads into the major themes this arc and overall run will explore. This recent loss has Captain America in a tailspin reliving his days as a soldier during World War II. Unlike the majority of major superheroes, Steve Rogers is not a hero born from tragedy. His call to arms was not proceeded by a tragic accident or the loss of someone close to him. He was a normal everyday man who was given the chance to stand up for his ideals in a way no one else could. His tragedy came as a price for doing the right thing.

In 2004 PTSD was just beginning to enter into the public consciousness in a major way. As more and more soldiers were returning home from the wars in Iraq and Afghanistan the effects of living a life of constant combat were coming home with them. This was certainly tapping into that as we see Captain America is dealing with similar repercussions of his time in combat. This is important not only to show that even an Avenger can struggle with PTSD, but also to remind us that PTSD has always existed we are just now really paying attention to it. 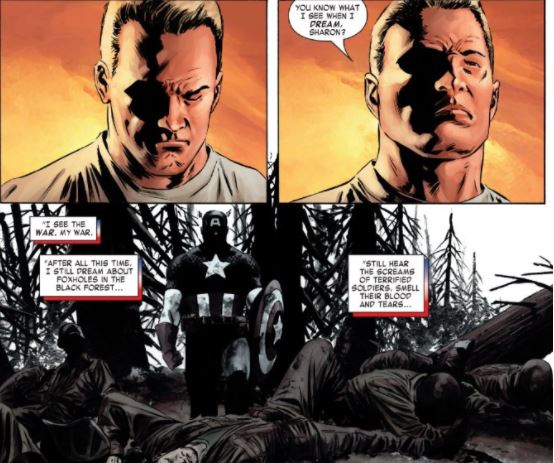 Captain America was designed to be a symbol of American pride and virtue both literally when he was created by Joe Simon and Jack Kirby and within the world of the Marvel Universe. Within this first issue writer, Ed Brubaker and artist Steve Epting are showing just how much weight one must bear to hold that role. Heavy is the arm that holds the shield and never has the weight had so much additional baggage; from his survivor’s guilt to the evolving threats all around him. All of which will culminate in the next few issues as his past and present become linked in a way no one, inside or outside of the comics, thought was possible. 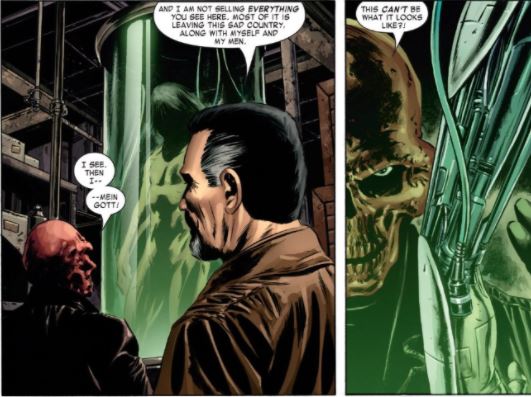 As  I returned to this issue I was impressed with how much it makes you believe it is setting up this massive conflict between Red Skull and Captain America. In fact, Red Skull has as much if not even more of a presence in this issue than Steve Rogers. The book opens up with him attempting to buy arms from the former Soviet General Karpov. Right away the stark nature of this series is set as the newest Red Guardian is murdered in cold blood. Karpov is shown as a contrasting force to the nihilistic Red Skull. Unlike Skull he takes no joy in what he has to do in order to preserve his plan. There also appears to be a possible conflict brewing between these two as they are clearly after very similar things for very different reasons. That comes back in a major way as the issue ends.

Both are seeking the massively powerful Cosmic Cube and as the story flash-forwards to the present day, we see Skull has stayed true to his promise and now once again posses the all-powerful cube. Right from the start, this comic is striking a very delicate balance. On one side this is dealing with major real-life issues like war and struggles with PTSD and on the other, you have this high concept science fiction MacGuffin of a magical box that grants wishes. How do you make that work while being respectful to both sides? Much of it comes down to the art.

If I were to boil down what works about the art into one image it would be the way Red Skull is rendered. Having a giant Red Skull for a head could easily be goofy or cartoonish. Here Steve Epting gives an almost horror design. His skin has a leathery texture and the way makes him seem like this disfigured man who resides halfway between life and death. 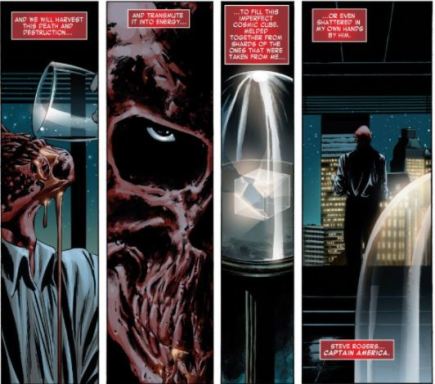 Colorist Frank D’Armata gives everything a muted look that sets the overall tone. Skull’s head is dominated by a darkened red to settle in a more realistic look. That makes the first appearance of Captain America more jarring as this red, white, and blue hero appears as this shining beacon compared to the shadowy world of Red Skull. +

There are some issues with the art that mostly occur in the only major action scene.

Captain America is looking to track down some terrorists who were planning on setting off a dirty bomb at Coney Island. He finds them on top of a moving train and proceeds to take them out using a type of brutal force we do not normally see from Captain America. Where this scene falters is continuity from moment to moment and the overall believability. Considering they are on top of a moving train seeing Cap apparently throw his shield behind him to take out a helicopter only for it to return in front of him in the next sequence. These terrorists must also be the worst shots in the history of mankind as Cap is running towards them full speed with no shield as they shoot machine guns right at him. Considering it is a straight line and a short distance you’d think he would at least get grazed with a bullet or two. 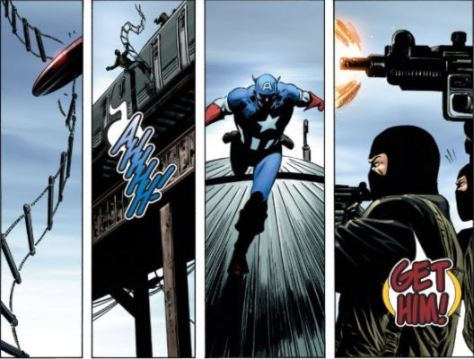 For most comics, this would not be nearly as much as a problem, but considering how much work is being done to ground this world of Captain America this scene did more harm than good. It was not action for action’s sake as its purpose is to show just how near the edge Rogers has gotten as of late. The general flow of the scene is easy to follow. So there are some positive takeaways but by far the weakest executed scene of the entire issue.

Where this issue succeeds the most is within its final scene. Bookending where we began as Red Skull is once again pondering his plan that will finally take out his greatest foe. Throughout this issue, there is imagery of reflection to symbolize the connection between Skull and Steve Rogers. Two interconnected entities apparently destined to battle each out until their final days. Despite how well this is setup sometimes it can get tiring seeing two of the same foes battle time and time again. What makes this issue stand out from the get go is how the final moments completely recontextualize everything that came before. SPOILER as Red Skull is shot with the literal power of a god in his hands. It is apparent Skull is not the major player in all of this. At what seemed like his most powerful moment he was steps behind General Karpov, who is now established as a major force to be feared. 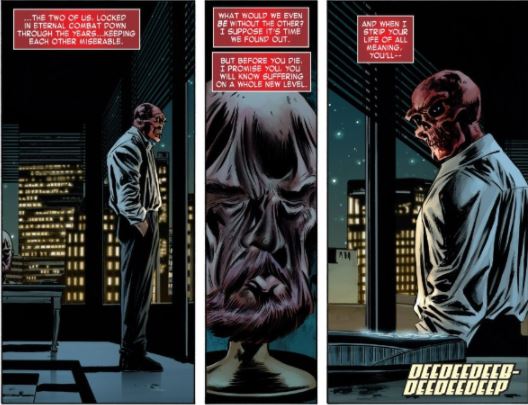 There are many first issues that end on a shocking moment or have a major death to try to grab the attention of readers in a very crowded comic book climate. Why this one works is because of how well it is set up. It is not a surprise for surprise sakes. Right in the opening scene, we get hints of what is really to come. At the time they are easy to miss or dismiss. The mysterious long-haired figure in a tube, and subtle threats that Karpov makes to Skull. Change is coming to the world of Steve Rogers and comics and its effects are still felt today.

What I also find surprising is what is not here or even mentioned–Bucky. Despite the fact that Steve Rogers is working through the loss of more friends Bucky is not brought up and barely seen. By omitting him here it makes his return all the more shocking. If he was heavily featured or mentioned it would show their hand long before they are ready to play it. Sometimes what you do not do is just as important to a good story.

Despite my few quibbles, this is by far one of the best first issues done by Marvel since its release. So much is accomplished in this issue without ever feeling like things are getting bogged down with the storytelling. It uses what it has from the current state of comics to the current state of the world to build a new status quo for Captain America that will lead to one of the greatest runs in Marvel history. This is the type of issue that should be studied by anyone who is going to take on a classic character to understand how to use their legacy to your benefit. Pure comic gold. 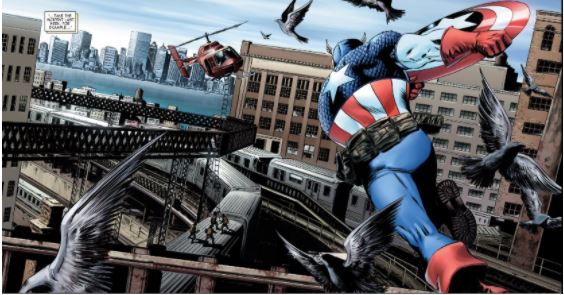 384 - Origins in Comic Reading with Steve/Megatron and TFG1Mike