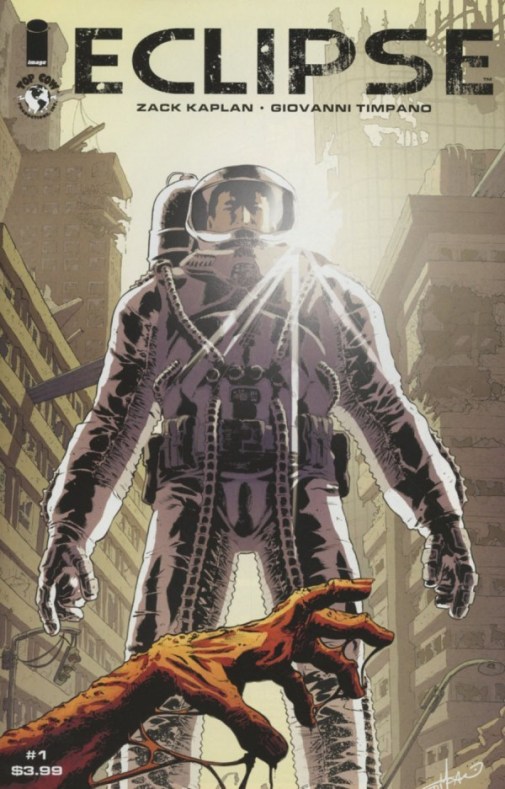 At one point storytellers will run out of different ways to destroy the Earth or create dystopian futures, but that time has yet to come. With that in mind writer Zachary Kaplan shows it is still possible ot have a fresh take on the end of the world in his new comic series Eclipse. For a first issue Eclipse works well building its world and setting the early foundation of the story to come.  While the quality is not to the level where it will be setting the world on fire, Kaplan’s intrinsic world design and steady pacing does show a great deal of promise.

I was somewhat shocked to see that this comic actually marks Kaplan’s debut into the world of comics. Previously he spent much of his time teaching the art of screen writing and film making at some pretty illustrious university. The old adage, ‘Those that can’t do teach’, does not appear to apply to him. Obviously with only one issue written he still has a great deal to prove. Still I was impressed with how well structured this first comic was. It was able to establish this new world rather seamlessly without feeling like a glorified prologue.

In the world of Eclipse the human race is near extinction.   A powerful solar fare the equivalent of two million mega tons of TNT hit the Earth killing the vast majority of the world. Now dawn is no longer the marking of a new day beginning. It is now the coming of humanity’s greatest threat. Any exposure to the sun without the proper protection will lead to immediate death in the most painful way. This had led humans to live underground when the sun shines in the sky. 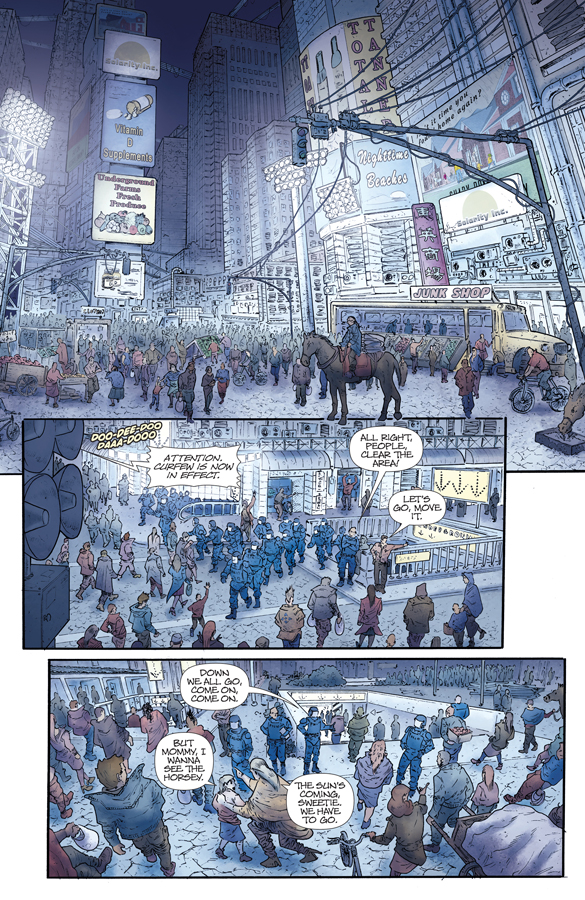 The first thing that came to mind while reading this was Danny Boyle’s Science Fiction epic Sunshine. That world in that film was the reverse of this situation. Their sun was dying and a team was sent to the sun in hopes of reigniting it to save mankind. In both we see the Sun used as a major focal point beyond its live giving force. There is this contentious relationship with the sun and the psychological power it can hold over the human mind. Here that notion is only brushed upon, but one can assume it will be a major theme moving forward.

We are brought into this world well after the global disaster occurred. People have adjusted and procedure and rules have been put in place. Despite those regulations a murder has occurred on the service world. Making things even more troubling it appears the person who committed the murder knew how to circumvent the security cameras and most disconcerting of all the person was able to commit the murder during the day. Considering the limited availability of the special suits that allow people to survive while the sun shines the list of suspects is quite short.

What I highly enjoyed with this first issue was the way Kaplan was able to allow the reader to explore this world without getting too caught up with exposition. Our main character David Baxter becomes our portal into the functionality of this civilization. We are able to see everything from the basic structures people reside in to the cultural hierarchy that has been established. Not only has a murder occurred but the person responsible has issued threats of future violence. Once of those threats was directed towards the daughter of a government official.

With this device Kaplan was able to progress the story, establish stakes, and at the same time clue us in that there is a functioning government and police despite the living situation. Simply put there was not a wasted moment.  The one aspect that was missing was a proper establishment of character. David Baxter has a workmen like quality that makes him relatable to a degree. What is remarkable about his is that he is unremarkable. With this only being the first issue there is a ton of room to grow. I simply wish I knew more about him behind the fact he appears to be a fan of the New York Giants. As a fellow Giants fan that does put him in the early running as the best comic book character of the year. As someone who is impartial I inclined to know more. 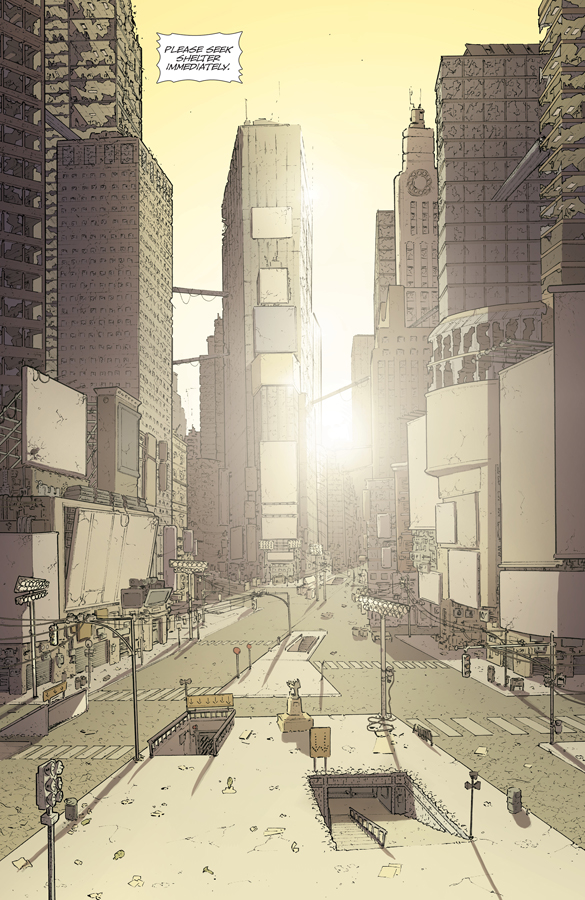 Artist Giovanni Timpano is also not a household name in the world of comics. He has more experience than Kaplan but not by much. Despite their greenness this team comes off as weary veterans. Their styles seem to fit together quite well.  So much of this story is dependent upon the effect of light, which make the books coloring all the more important. The over saturated look of the service world puts a nice sheen on the panels making the reflection of the sun ever present. This sets up an interesting dichotomy with the subterranean world that has a drab look that highlights the dreary existence.

Overall Eclipse #1 is solid  debut for both a comic and a writer. There is a great chance we can look back years down the line as this marking the beginning of the next great creative team. Much more time is needed to make that claim, but after one issue I am excited to see that proclamation come into flirtation.