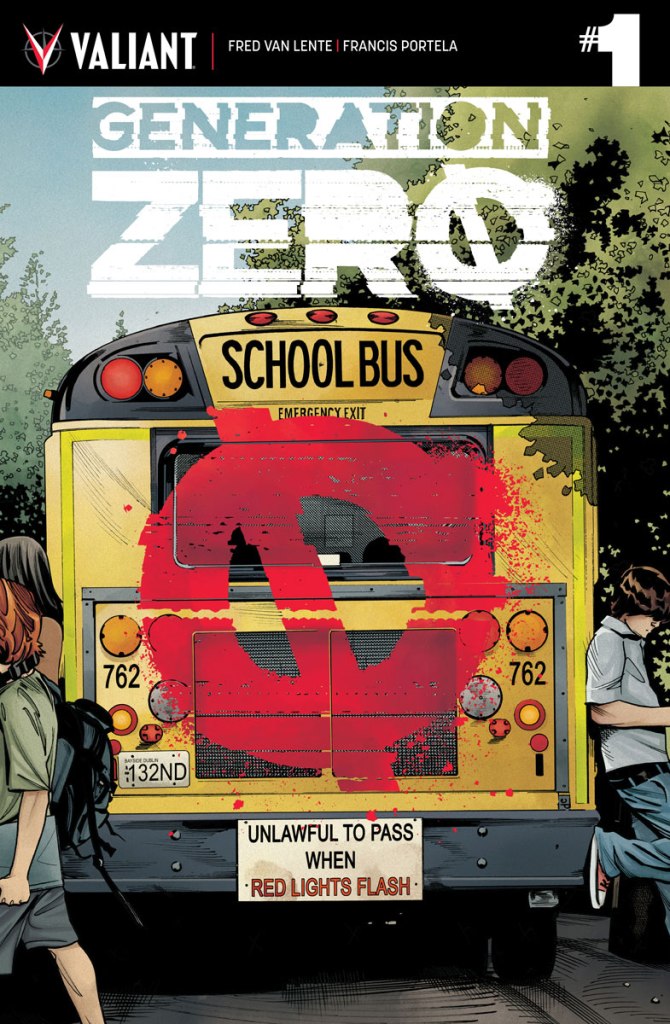 It is not common to read an introductory issue for a new series that barely touches upon the titular characters. After reading the first issue of Generation Zero I somewhat wonder now why it does not happen more often.  Writer Fred Lente was able to avoid the majority of pitfalls we tend to see with first issue team books by focusing on the underground lore of the team before they ever appear on panel.

This choice would only be a gimmicky maneuver if the story that was being told did not work on its own. Luckily it does as we follow high schooler Keisha’s attempt to find out what really happened to her deceased boyfriend. Most view his death as a result of another teenager who made the poor choice to get behind the wheel drunk. Keisha does not see the fate of her straight edge boyfriend ending that way. She believes she was murder by the corporation that runs their town for uncovering the true secret behind their existence.

Keisha is the star of this issue, and as a character she is quite compelling. What works for her is that she is not easily defined. She may dress like she just came out of hot topic but personality wise she is not a generic cliché. Yes she is clearly not in the popular crowd at the same time she isn’t a straight forward outcast with zero friends. I can see a great deal of different people with a variety of backgrounds identifying with her which makes for good drama.

After Keisha’s boyfriend is killed she uses the internet to seek the assistance of the infamous Generation Zero.  In one of the issues best panels we see just how much of a reputation Generation Zero has built as people from across the globe seek their assistance from a variety of issues which is impressive considering no one really knows if they actually exist at this point. We see they are asked about everything from petty personal problems to stopping someone from committing horrific acts of violence. Intrigue is built as one wonders who exactly are these people that demand such a global response.

Beyond that there is something very Stepford Wives about the town Rock, Michigan. From the outside it appears to be the Silicon Valley of the Midwest up to including free Wi-Fi for all the residents. However, something ugly may be lurking underneath. Something so vial it would lead to the framed death of a teenage boy.

Some may become impatient that we are spending so much time on set up. That is understandable if you you considering what is happening solely setup. It is building up this first arc to make you care about all characters involved so much so that my hope is Keisha stays within this book one way or another. At this point I am more invested in her story than Generation Zero’s, which in a way can be problematic. When they finally do show it is somewhat anticlimactic. It is somewhat by design but I do wish they payoff was a little sweeter.

Artist Francis Portela’s does have a tough task considering how this issue is void of action. It was up to him to keep the energy of the book going. For the most part he accomplished just that. As mentioned previously his panel introducing us to the world of Generation Zero was a standout, His characterizations were also well rendered especially how he encapsulated much of the emotion of Keisha. Her pain was apparent visually when her words said otherwise.

Generation Zero #1  may not unfold like a traditional first issue, and that is a big part of what it makes it work so well. The one question remaining is can Generation Zero  live up to their reputation inside the book and out.