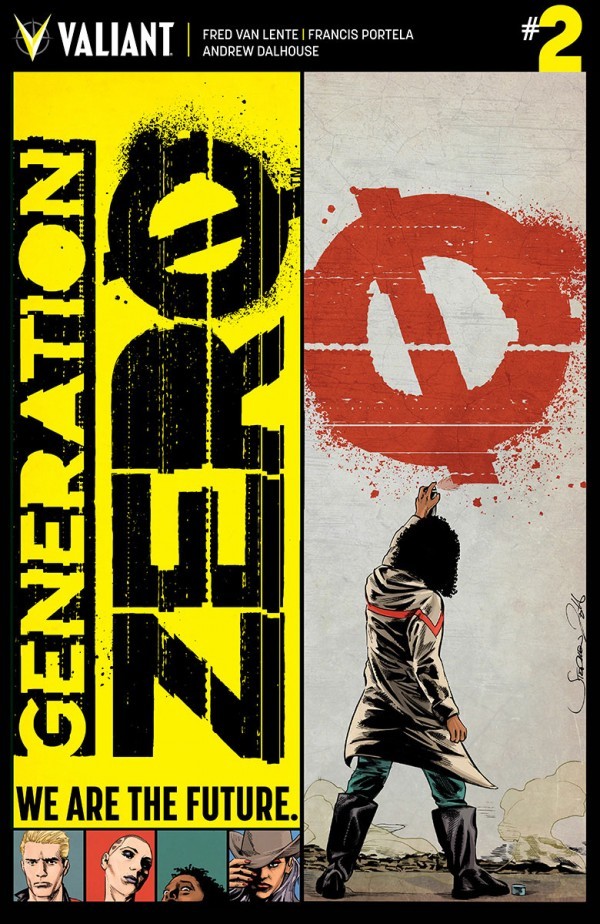 Writer Fred Van Lente is playing the long game when it comes to the Generation Zero team. They were barely in the first issue and although they are more prominent in this issue the focus still not quite on them. Lente appears to be cycling through the team introducing characters bit by bit to allow each to standout. Doing this he has widen the doors for new readers who may be reading about these characters for the first time. Aside from that he is also crafting quite the tale centered on an ordinary teenage girl and her search for justice.

Last issue ended with Generation Zero showing up to save Keisha from mysterious forces. Here we see the aftermath of that encounter as Keisha is still trying to figure out what is exactly happening. She hoped Generation Zero would come to save the day but she is quickly beginning to question that decision. Partially due to her father’s disapproval of these individuals as he stumbles upon them in the middle of a party with underage drinking.

What started off as a stereotypical moment between an overly protective police officer father turned into something more substantial on the ride home. We see Keisha’s dad is not just this hard-nosed militaristic individual that spouts discipline at all times. He is a caring father who clearly has a trust and understanding with his daughter due to the challenges they have had to face together. It was a brief moment that could be planting the seeds for something grander as the story continues.

Planting the seeds is a big part of what this comic is doing. We are introduced to some characters of the Generation Zero, most notably the Zygos twins. These two adolescent twins may look like they belong in Stephen King novel, but luckily for humanity they are using their supreme intellect and telepathic powers for good. Lente is able to pull a lot of humor out of these two with their desert dry demeanor and lack of social understanding. The ‘saying what’ bit had me audibly laughing at multiple occasions.

Where the first issue centered on the evil corporation that took over the town this issue saw more focus on the actual murder of Keisha’s boyfriend. Lente cleverly drops in these small story shifts that gradually adjust the trajectory of the story. They are not necessary huge twists that will drop your jaw. Instead this plot leaves you in this continuous roundabout where you can see your destination but the exact direction we will be taking is unclear. The key will be knowing when to get off so it does not get tedious going in circles all day.

So far my only concern with this book is the character of Christopher who appears to be a leader of the team. From his look to his actions he seems like a generic team leader archetype that lacks a unique personality. The glimpse we get of him is brief so at this point it is only speculation. While thee two issues have been quite successful so far I found myself caring the most about the character of Keisha who may not be around in a few issues. That may make for a great story arc, but it may not make for a great comic book series. Right now it is way too soon to tell so I will simply enjoy what I have and hope for the best in the future.