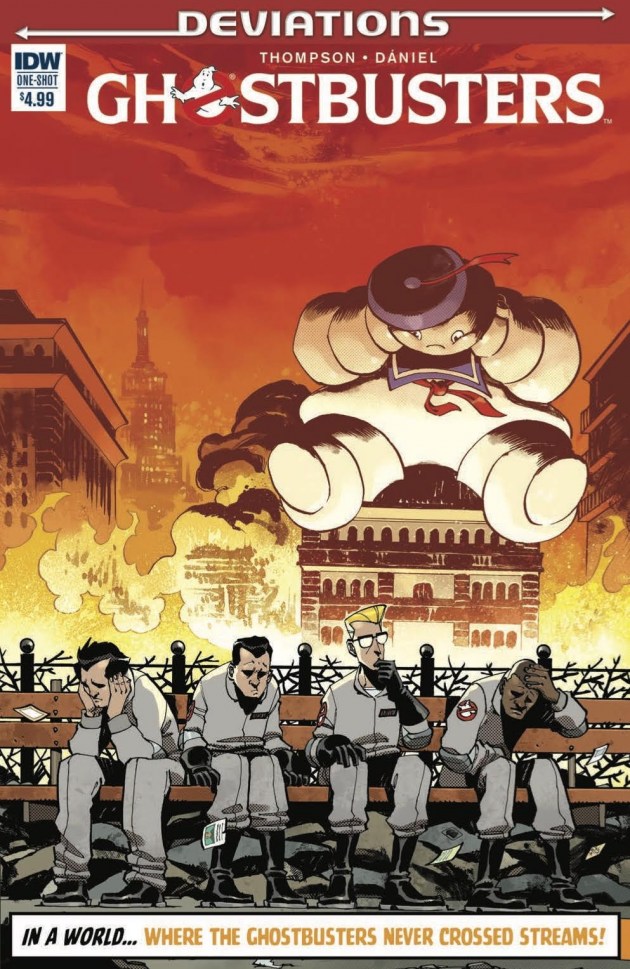 As someone who is both a big fan of The Ghostbusters and ‘What-If?’ type stories Ghostbusters: Deviations has a lot of promise as it looks at what the world would have been like if the Ghostbusters never infamously crossed the streams. However, as often is the case, that promise is never fully realized as we are left with a story with a major identity crisis. Ghostbusters: Deviations wants to be heavily built upon the legacy of the films, yet does little to resemble them in tone, comedic style, or quality.

The story picks up a month after The Ghostbusters failed to defeat Gozer and close his portal. Despite that failure The Ghostbuters are still trying to make a living ridding the city of the Minipuffs that have been plaguing it for the past month. In a sequence very reminiscent of the hotel scene in the original film we see the Ghostbusters take on a horde of these mini marshmallow menaces. Here is where the problems begin.

This sequence on its own is fine.  The issue is when you have a comic that is so closely tied to the original property it is natural to expect you would be reading a story that exist in that same world. By no means is that the case. Fittingly though as we are still dealing with the aftermath of the recent Ghostbusters trailer I find myself having the same issues with this comic as many had with that trailer. What the humor lacks in cleverness it fails at in sophomoric execution. Gross out gags our plentiful and when we finally find out where the mini marshmallows come from I found myself rolling my eyes rather than responding with the laughter the book no doubtingly expected.

Now the interactions between Gozer and The Ghostbusters were by all means great. They were by far the greatest highlights of the book, but by making Gozer more of gentle giant you destroy any chance of creating any form of suspense. The constant barrage of goofball jokes made it impossible to take an ounce of this seriously leaving its success completely dependent upon the implementation of its comedy.  For me that dependency lead to a massive failure.

Comedy is extremely subjective so I try not to discount a book simply because the comedy did not work for me. When looking at the story issues those problems are not nearly as subjective. There is a severe lack of execution when it comes to utilizing its creative premise. This is supposed to be a world in complete chaos after Gozer succeeded, yet it appears this loss was more of a sticky inconvenience than a devastating disaster. The beauty of telling an alternate reality story is creating a world that is unique when compared to the original. By no means does that happen here.The biggest alteration is someone changing their sign to Ghostlosers, which is a rather timid complaint for failing to save the world.

In a way this should really be called Ghostbusters: Delay, because it ends up giving us a very similar story to the original just in a much more dragged out fashion. Nothing is more disappointing when you have so much room to be creative and yet we get a comic that is bland and uninspired. Ghostbuters: Deviation is a story of little consequence or purpose. For those looking for a Ghostbusters comic you would be better off looking elsewhere.