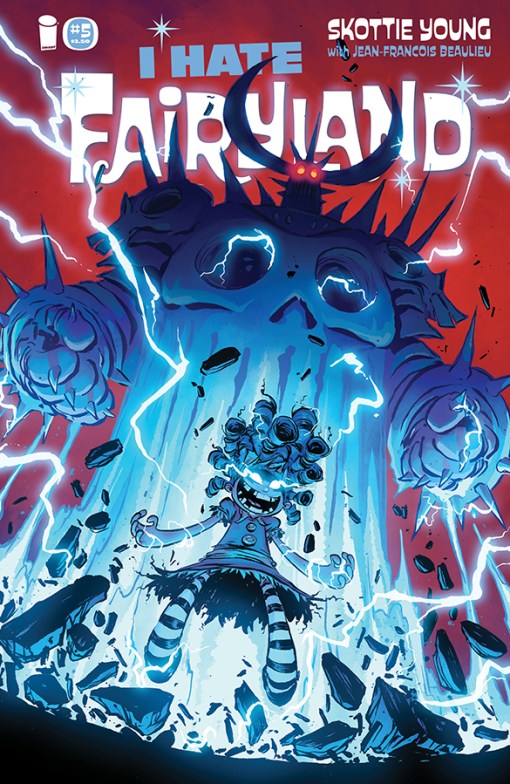 For those entering this comic for the first time it revolves around the story of Gertrude, a six year old girl who gets sucked into the world of Fairyland. What first starts as a young girls dream turns into a nightmare when she gets stuck there for thirty years looking for a way out. Although stuck for thirty years Gertrude does not physically age, but does mentally mature during this time. Being stuck in a world full of over the top bright colors, magically singing creatures, and an abundance of sunshine and rainbows does have its drawbacks. This world has drove Gertrude into a crazed murderous state as she searches for her way out.

If you are at all interested in picking up this comic this is not the issue to do it. I would fully advise starting with the first issue as here we see the ending of the first arc. If anything you would be better off waiting for trade or picking up with the next issue where the next story arc will begin. You will have no issue understanding what is occurring, however your enjoyment would only be enhanced by going back and reading what came before.

In issue five we finally see the showdown the last few issues have been building towards. Gertrude and Happy going toe to toe to see who will wield the key to bring them back to their world. This sequence is a microcosm of what has made this series so enjoyable so far. It is unadulterated insanity in its best form. Skottie Young takes the action you would normally scene in an extreme anime and presents it to us in the animation of Disney film.

As both writer and artist it’s obvious the success of this book is all on Young’s shoulders. He takes everything I loved about his style to an entirely new level. It is almost like a natural and much more violent evolution to Looney Tunes with its cartoony violence and character design. Credit should also go to colorist Jean-Francois Beaulieu. His colors give the book the life it needs. In this issue in particular he has some creative choices to demonstrate the differing powers between Gertrude and happy. Never has witnessing a creature’s heart being physically ripped out looked so cute and innocent.

This comic is an amazing Adult Swim series waiting to happen. Like an animated cartoon the pacing is quick and the story is easy to digest. Never does it attempt to get too serious, and never is it afraid to push the boundaries of what is acceptable. My only concern with this series is how long it can last. This issue works as a solid ending point, although I am not against seeing it continue. With the events of this issue the future dynamic of this series will surely change. Still, I wonder how much more is left with this concept. So far Young has kept it fresh and interesting, but it can easily become tiresome and repetitive if it stays on for too long. At this point though if you are looking for a book that will remind you of the joy only comics can bring this is it.