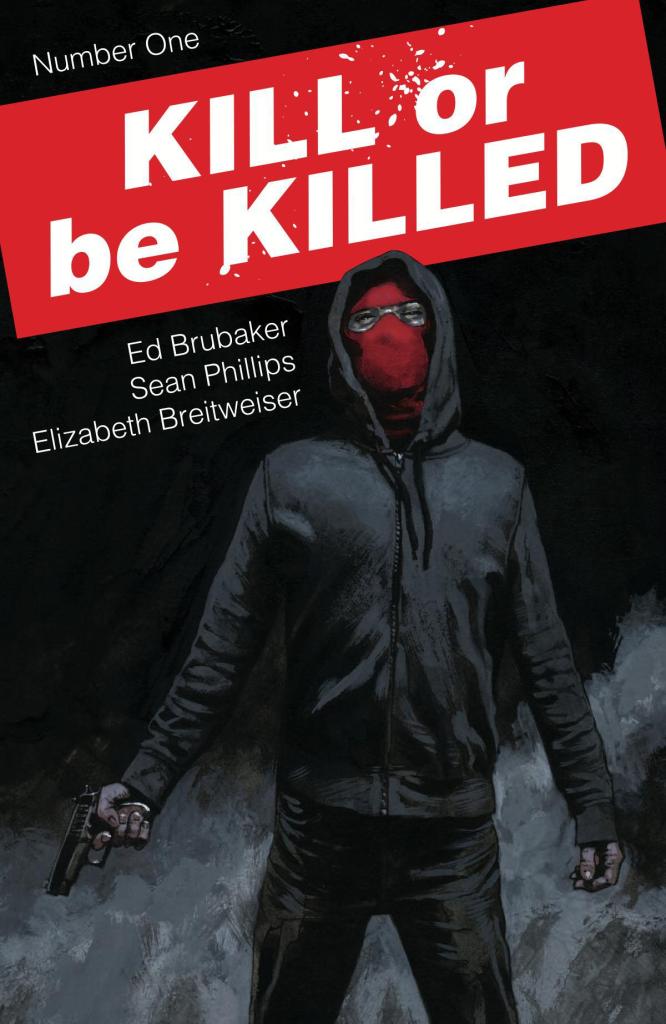 Waring: Minor Spoilers are contained in this review.

Ed Brubaker and Sean Phillips should make all the comics. Both are comic heavyweights at this point on their own accord, but when they get together special things happen. Last year it occured when they brought us the classic noir series The Fade Out  and it appears they are at it again with their newest series Kill or Be Killed.

This story this time takes place in present day where Dylan a 28 year old sheepish grad student is painstakingly going through life. He seemingly lacks purpose and the only girl that gets him is currently dating his arrogant roommate.  However, after a failed suicide attempt Dylan’s life begins to drastically change.

Brubaker and Phillips both know how to get the reader into the mind of the character, and that ability is on full display here. Dylan begins as this masked badass who mows through criminals like a supped up version of The Punisher. They let us get comfortable just enough with this idea to lead us to believe we have this character and book quickly understand—  clearly this is just another comic book series about a man taking the law into his own hands.

Of course that is not the case because this is Brubaker and Phillips. Quickly they remind us of their unique storytelling ability. We see this supposed badass nearly taken out by what appears to be a below average goon to provide a hint that he is well over his head. Really though it is hammered home when we first see what this masked vigilante looks like. Phillips gives us so much in this one small panel. The thousand yard stare look in his eyes, the messy haircut, and the slumped over posture makes him appear like someone who would be too cowardly to cosplay as a superhero let alone try to be one.

The rest of the book is done in flashback as we start to begin learn how Dylan got to that point.  I love how Brubaker’s use as a tool to build character and an opportunity add in some levity.  It’s reminiscent of Shane Black in how its overly self-aware and purposely muddled. He will misspeak and consistently trail off to show is unfocused sense of being. In a book of rather heavy subject matter it was good use of humor to lighten the mood.

The one major issue I had with this issue is the supernatural element that seemingly comes out of nowhere after a failed suicide attempt by Dylan. Apparently he lived not through sheer luck but through the help of some demonic presence that now wants Dylan to repay him by commenting murder. On the bright side he only wants him to murder people that deserve it due to their behavior so there is somewhat of a bright side.

Obviously the major question is if this demonic presence is in fact real or just a figment of Dylan’s fractured subconscious. Personally this trope has become rather tired, and I was actually disappointed this was not just a straight up crime series. Currently a book like Marvel’s Moon Knight  is already exploring a similar theme to great effect. Is there more room to explore? I enjoyed the characters enough in this book to find out, and I also trust that Brubaker and Phillips will once again play against my expectations. Still it is my one major hesitation moving forward.

By  any means Kill or Be Killed  is set up to be another solid series for Image and further proof that Ed Brubaker and Sean Phillips make one phenomenal team.

Altered Geek - 151 - Favorites of the Geekdom