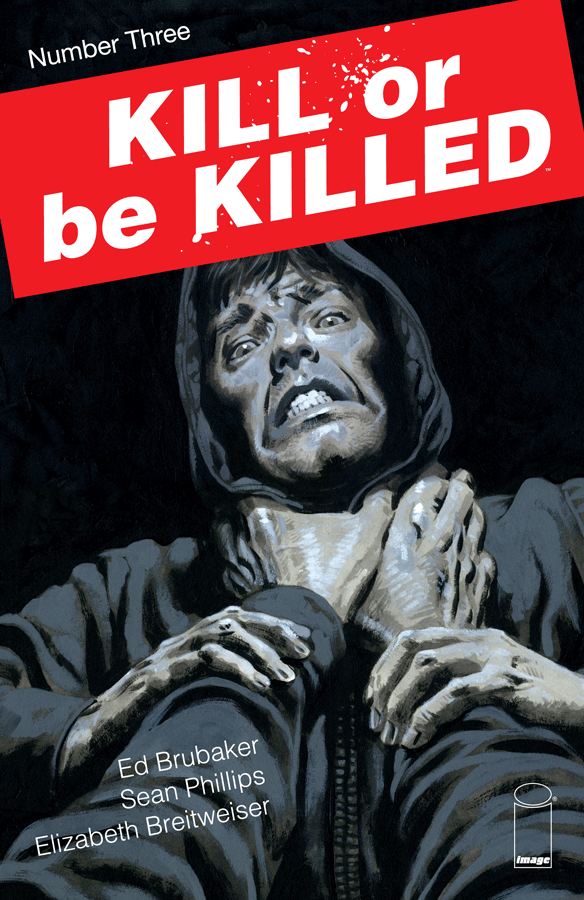 The world of comic books if filled with good writers that constantly come up with inventive ways to tell compelling stories. There are few writers in general though that truly have master like understanding of their craft. With his work on books like Criminal, Velvet, The Fade Out, and now Kill or Be Killed it is safe to say Ed Brubaker has an elite understanding of the noir genre. Reading a crime book from him is like listening to a musical savant, while we are focused on what is in front of us he is five steps ahead in his mind planning his next move. Now three issues in all points lead to believing Kill or Be Killed will be his next great comic series.

What a lot of writers tend to do is get caught up with the concept of their book by spending issue upon issue setting up the rules and regulations for the world that they are creating. This can work with the right hand, but what Brubaker is always careful of is not allowing the story to get ahead of the characters. The premise of the book may be built upon the foundation of a man being told  by a demonic presence to kill, however that aspect is kept tucked away only to to be used when needed.

This accomplishes two major things. First it keeps the mystery going whether the demon is in fact real or the figment of Dylan’s fractured psyche. At this point neither he nor we know the answer to that, which makes the decisions he has to make all the more haunting. It lends the question of whether Dylan cares enough to challenge the reality of the situation. Is his wiliness to so quickly accept the circumstances he was given insight to his hidden desires? Is he looking for justification for his acts, or is it more of a motivational technique to finally resolve issues that have been subconsciously haunting him for decades?

After an issue absence the demon entity does return to reassure Dylan of his chosen mission. Artist Sean Phillips’s work in this sequence is again on point. He creates such detail and character within his artwork in this entire issue. There is a drab atmosphere the engulfs everything to keep in the mood of the characters. Even a theme park like Coney Island seems void of joy with his rendering.

The second result of keeping the demon’s involvement is allowing for more time to build characters. Usually something like a love triangle in a crime story would do little more but get in the way. Here it is one of the most fascinating aspects of the book. Brubaker was running the risk of  turning Kira into an easy villain. Here we get to spend more time with her to better understand why Dylan is so taken by her, and get a better grasp of who she is as a person.

In addition to building up their relationship this issue deals with the fallout of Dylan’s first murder. Police discover the body of his first victim and the death sparks a major news story. Dylan is worried he may have killed this man for no reason. Maybe the demon is not real, and if the demon is not real maybe his memory of him being a child molester is also false. Brubaker is using the idea of the false narrator but in a slightly different way. If this demon is in fact a figment of his imagination what else does that mean? Where the memories we were shown also false?

These questions permeate in the background throughout has Dylan is constantly checking for updates on the story. What makes this issue most intriguing is Dylan’s reaction as his memories become reaffirmed. We begin to see the evaporation of guilt, and in its place came the sense of satisfaction. It appears Dylan is beginning to go past the point of accepting his satanic burden and moving towards cherishing it, which makes the future of this comic all the more exciting.