Moon Knight is one of the few characters that can have great runs by different creative teams where each version feels very distinctive yet they all still remain as an overarching hole. Max Bemis and penciler Jacen Burrows have already made this book their own. They have given their spin to the man of multiple personalities by trying to do something that no one has really done before with the character, which is giving Moon Knight more distinctive villains outside of himself.

This series started with the creation of that villain as an escaped patient from a mental institution was granted powers from the Egyptian sun god Ra. Marvel has utilized mythology a lot in their history with characters like Thor and Hercules so it makes a great deal of sense to expand upon that idea with other theological figures.  In this issue, the choice of using Ra begins to make more sense. An element of family and especially fatherhood is beginning to play a bigger and bigger role.

Here Marc has to save his daughter and former girlfriend from his now increasing cavalcade of villains. Writer Max Bemis has an element of humor to his work that is becoming more and more distinctive. Sometimes it works to great effect, but at times it can undercut a moment.  In the early goings of this issue, we see Marc have to adlib after his clothes catch ablaze. Isolated it is funny seeing him undress and throw a pair of paints into the face of his new nemesis. However, it does make you wonder why he would be given so much time to complete such a maneuver. Another instance of a character making a joke about gas was somewhat out of place and unnecessary. Humor can be an effective tool, but how you get to that joke is an important piece of the process. 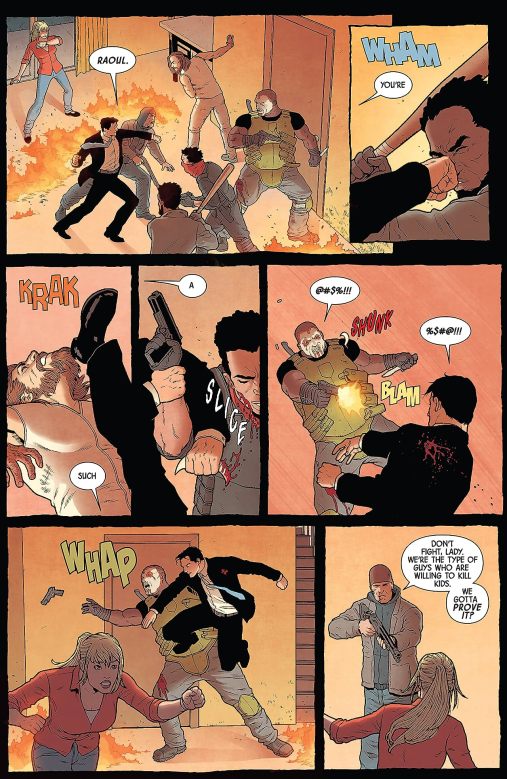 Where his dialog works best is seeing Marc interact with his other personalities along with Khonshu.  He took what would have otherwise been this giant dumping of exposition and adds a flavor of fun. We learn about Ra and his history with some hilarous visual clues that at first appear on the nose but the script adds another layer that was effective and unexpected. It is also different to see Khonshu take more of a mentor role with Marc. The conflict between them has thankfully died down hich has given us something different to this tortured soul we have come to know.

Despite the small issues Moon Knight has been one of Marvel’s best new launches since Legacy began. They so do not fix what is not broken. This series was one of the few that was great for Marvel so it has a level of expectations many of the other new series did not have.  What Max Bemis and Pepe Larraz have done is not try to fix anything rather build on what was already working by moving forward with the development of Marc Spector in a natural way. Him having more control of his life has ironically has given him more problems that need fixing. Giving him a daughter to take care of could come off as a cheap ploy. We have only gotten small doses but those small doses have been fantastic. How can you not love a kid who calls herself Diatrice and is very protective of her swings? Clearly she takes after her father. Seeing that relationship develop will surely be a major highlight of this book.