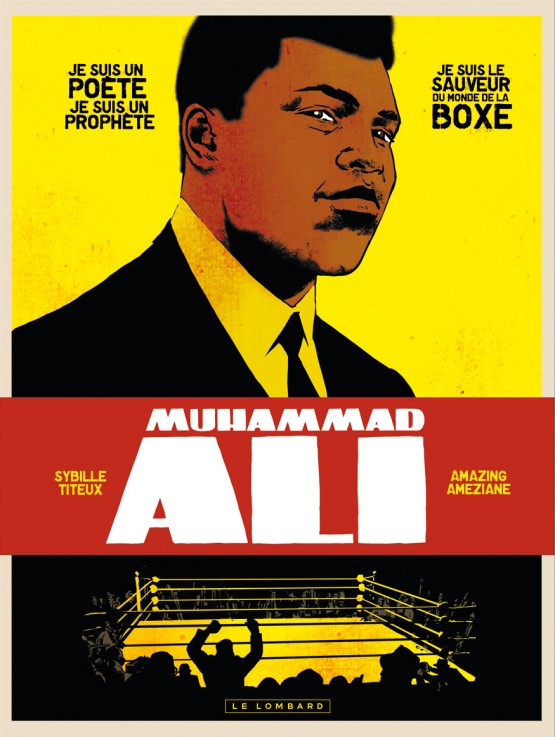 The term icon gets thrown around a great deal. More often than not the recipient of the label is not truly deserving. Muhammad Ali is one person no one would argue is deserving of being call an icon. Due to his popularity and impact there have been a number of movies, television shows, documentaries, and even comic books dedicated to his life. So at this point one wonders if there is anything more to say that has not been covered.   While Sybille Titeux and Amazing Ameziane’s original graphic novel Muhammad Ali is not packed with new details, it does tell the his story in such a beautiful and original way even the most knowledgeable Ali fan would get something new from this experience. For those who have ever wondered why Muhammad Ali was such a polarizing and important figure this give you the complete answer.

Originally published in French Dark Horse has taken  Sybille Titeux 2015’s novel and translated it into English for all of us to enjoy. Knowing that almost makes this comic even more impressive because it feels like it was written by someone who has had an imitate relationship with the man himself. Titeux’s writes this story as if she is speaking directly to Ali. Much of the narration is not directed towards the reader but to Ali himself making it seem like we are getting a firsthand glimpse of Ali recounting his own memories. Titeux takes moments that have now become legendary in Ali’s life and asks what was he truly thinking at the time. This adds layers of new information to moments most have already seen multiple times already.

When Ali first confronts Heavy Weight Champion Sonny Liston at the 5th street gym his outward appearance is confident and full of rage, but Titeux goes beyond that to the fear that was hidden underneath. How his lip may have been quivering but his words were loud and proud. Mind games continue in the way in as Ali works to convince Liston he is truly crazy. Ali was a showman well ahead of his time that took lessons learned from everyone from Religious leaders to Professional wrestlers to get a reaction from the crowd. Unlike others he saw the benefit of getting people so angry they would pay anything to see you lose.

What Titeux does with this story that many others have failed to do is put Ali’s life in complete perspective. His actions did not occur in a vacuum they were influenced by the life he led and the political landscape at the time. How even with an Olympic medal around his neck he was not allowed in certain restaurants because of his skin color. Seeing the consistent racism Ali dealt with despite his fame and success leads to a better understanding of why the Nation of Islam’s message hit him the way it did, and why a person like Malcolm X would be so significant to his life.

Titeux gives us the what and the why. It is the complete comprehensive look into not only Ali but the way the world was and is now. This book is not simply a biography of an important sports figure. It is a touching and powerful story about the issues that shaped the twenty-first century, and how those moments shaped Ali and how he shaped them back.  As someone who has watch a great deal of Ali documentaries and read many stories about the man this was easily  the most complete investigation into his life as a whole.

A big reason why this novel is such an astounding success is the art work of  Amazing Ameziane. On a basic level Ameziane drawings have a photo-realistic quality, but more important you can feel the emotion in every face. Ali is known for his infamous expressions and they are all well represented here. What brings this to an elite level is the insanely creative layouts Ameziane comes up with. Ameziane incorporates iconography from every aspect of Ali’s life and integrates them in increasingly imaginative ways. The sheer amount of variety keeps you anticipating what he could possibly come up with next. Each page tells its own complete story full of life and energy. Biographies can quickly become dull but that was never a worry with this novel.

Muhammad Ali  is written with elegance and drawn with grace to the point it elevates the medium as a whole. This is the type of book you can give to someone who views comics as a lesser medium to show them graphic novels are capable of telling stories on the same level as any other artistic form. If you are comic book fan, sports fan, fan of US history, or simply someone who enjoys experiencing master work this is a must read.