One of the downsides of having success as a comic book creator is the level of expectations that come when you try to launch a new series. Certainly, it can be a good problem to have when people have a high regard for your craft, but it does open the door for possible disappointment. Someone like Robert Kirkman has an extra layer of anticipation due to the level of success some of his books have had outside of the world of comics. Also with his long-running series, Invincible ending many are hoping he has something to fill that void. Enter his newest book Oblivion Song.

When you look at where Kirkman excels as a writer it is his ability to develop characters and establish an engaging atmosphere. Those skills are not necessarily something that you can showcase fully in one issue. As a first issue, Oblivion Song #1 has a lot of the pieces that make you think it will have the success of books like The Walking Dead, but if you remove the names attached it does not jump out at you as the next best thing in the world of comics.

The story takes place a decade after an event known as The Transference where  300,000 people living in the city of Philadelphia disappeared. They were transplanted to another dimension that runs on a different frequency than ours. It is a literal hell on earth where grotesque monsters roam free and buildings are covered with other worldly vegetation. Although this is a hell you can escape from. Nathan Cole and his team were able to develop technology that would allow them to travel to this dimension and return many who were thought to be lost forever. Now ten years later the amount of survivors has dwindled as well as the need for the program. Most are ready to move on while Nathan is unwilling to see the program go in hopes that he may finally find his lost brother. 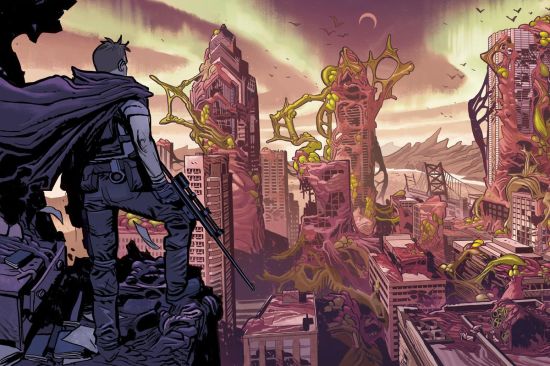 In a quick glance there are pieces here we have seen before to a great extent recently. Stories like It or Stranger Things have dealt with the idea of another dimension and its creatures bleeding into our own. Being a familiar tale is not automatically a bad thing, and it is not like this is yet another post-apocalyptic story.  Right away there is a built-in emotional dynamic as our protagonist has a personal stake anyone can relate towards. We have all lost love ones and if there was a chance we could bring them back we would certainly fight against the odds that are in front of us. What makes this story intriguing outside of that emotional level is that complex dynamic of how we as individuals and as a society react to tragic events.

What Oblivion Song appears to be addressing is the complacency that occurs towards horrific events that we assume we change us forever.  Massive tragedies from terrorist attacks to natural disasters have shaken the fiber of the world but no matter the size we eventually move onto something else while those who were the most affected are left to pick up the remaining pieces. In some ways, that ability to move on is necessary as it allows for closure so the healing process can begin.

Even the title Oblivion Song is a reference to human’s ability to acclimate. How we can change in ways we would never expect to cope with a tragedy. How an atmosphere can engulf you so much the minutia of your day to day life changes. In this case how something as innocuous as white noise can be like an unforgettable song that you can never stop hearing. Think of how soldiers can get so accustomed to gunfire that it is the silence of home that they fear.  In a way, there is a beauty to our minds impressive ability, while at the same time it causes those noises linger in the background like a nightmare that will never leave. 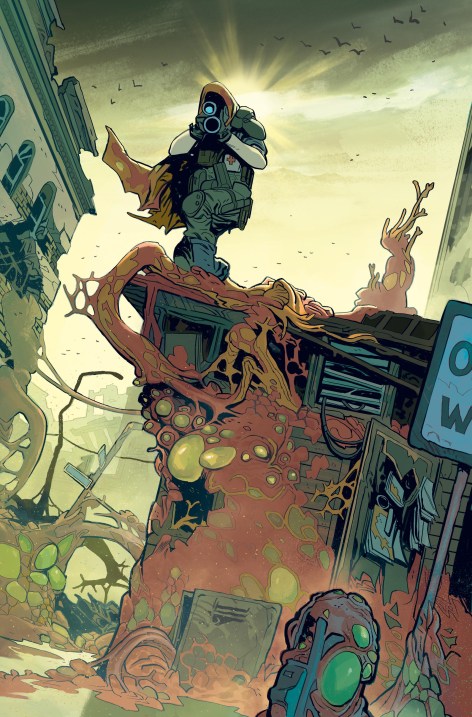 These are all pieces of what will hopefully be a fascinating look into the dichotomist relationship humans have to tragic events. How healing is necessary to allow us to find peace, but at the same time moving on can lead unintended negative consequences. The concern is those ideas will not actually be explored like they could. Part of why the final twist that ends the book had the opposite effect it should have. Ending a book with a shock to bring you back is understandable. This twist though brings concerns that we will get a much more straightforward story than the thematic groundwork would lead you to believe

Lorenzo De Felici’s art is another major highlight. The book opens with some eye-popping images of these fantastic creatures roaming a decaying Philadelphia landscape. His action scenes move well as right from the start you are head first into a pulse-pounding action sequence. When things slow down and the focus shifts to more dialog and dramatic scenes he keeps things interesting. His use a shadow works well in establishing a melancholic mood after a triumphant rescue. The colors work well in differentiating these two different worlds. The other dimension has these greens and reds that brighten the page while the normal world has a more muted look.

Oblivion Song #1 is a good issue to what could be a great series. For those hoping for the next great comic have some patience as the elements that make a great story are here and ready to be developed.