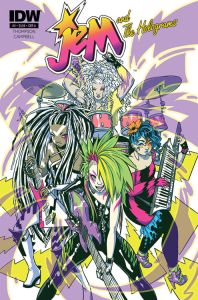 In the first issue of Jem and The Holograms we met the group as they were preparing for The Misfits Vs. competition. Now in issue two we get many new faces as well as new developments. Let’s dive in!

The Misfits are in the middle of a performance for the Lin-Z’s Show. Afterwards they are going over the acts that have submitted videos for The Misfits Vs. challenge and Pizzazz barely holds back disdain for the caliber of acts they are seeing. That is until the girls of The Misfits see Jem and The Holograms video submission. Most are impressed, Pizzazz may not be …but Rio is and looks up Jerrica on his phone.

Meanwhile, Kimber and Shana are at home and are floored by the reception of Jem and the Holograms. Once they show Jerrica, she begins to get nervous on whether this was the right decision or not but those fears are quickly squashed by her friends. An opportunity to help out the Starlight Community Center occurs and Jerrica jumps at the chance to help out with Jem and The Holograms.

What Is This Feeling?

There are connections brewing in Jem and The Holograms #2. One more familiar for the readers who watched the series as things are heating up with Rio and Jerrica on their date. But Kimber has her sights set on the Isle of Misfits. After going to a coffee shop signing, her and Stormer are feeling friendly while the Misfits are crying traitor.

Every time I go back through these comic issues it gives such a feeling of home. It is familiar even with the modern take and doesn’t detract from some of the favorite parts of the show. Kelly Thompson and the art team of Sophie Campbell, M. Victoria Robado, and Shawn Lee have found such a brilliant balance.

This series hits a place in the past while giving new and intriguing takes. I love the relationships  and cannot wait to see how the depth of character takes off in the future issues. For this issue specifically, on the GCRN scale I give a 5. Not only would I recommend the issue but I think it takes what would normally be seen as a filler issue and spins it on it’s head.  We are given movement forward but there is so much to catch the eye and explore. 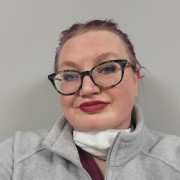 Comic Concierge - The Nice House on the Lake Review #shorts

Comic Concierge - Graphic Thoughts: Teddy, Run Home If You Don't Want to Be Killed, I Never Promised You a Rose Garden